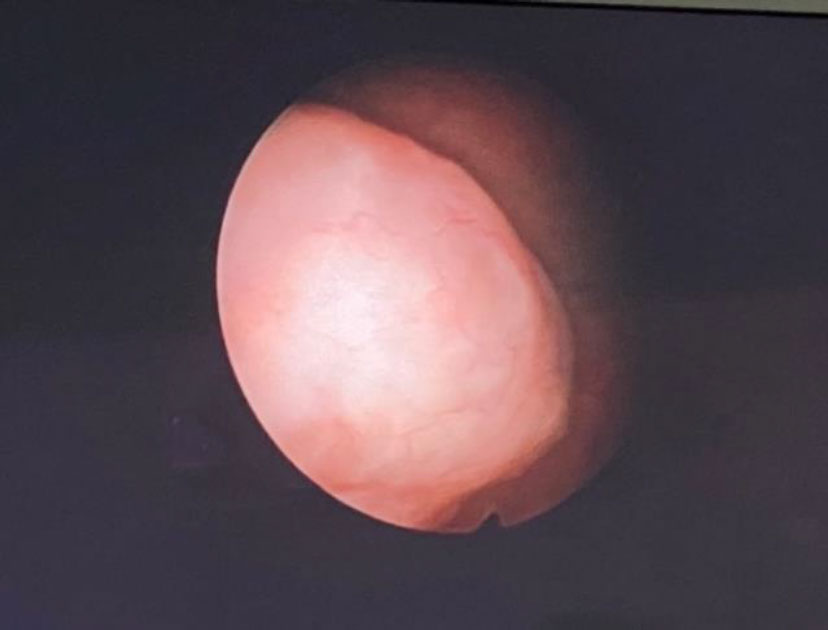 Figure 1. Submucosal Myoma on the lateral wall of the uterine cavity 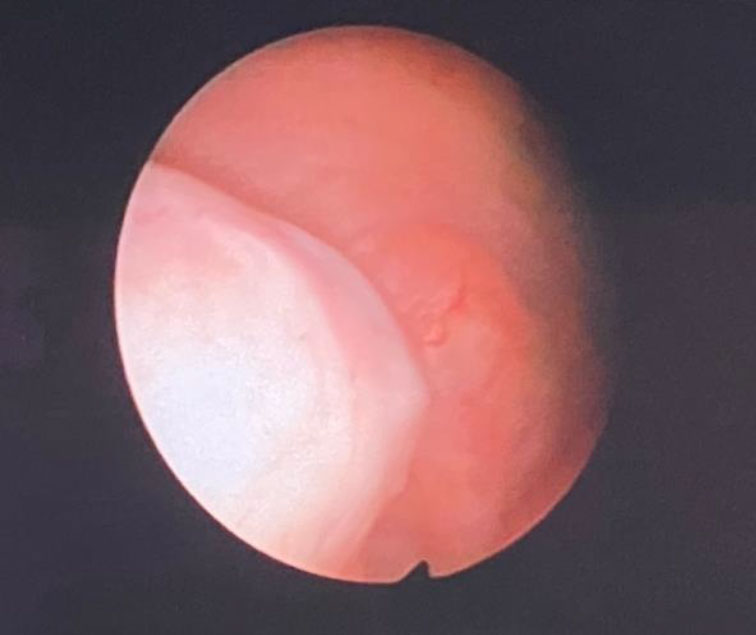 Figure 2. Submucosal Myoma size >40mm on the lateral wall and size >20mm in the posterior part of the uterine cavity 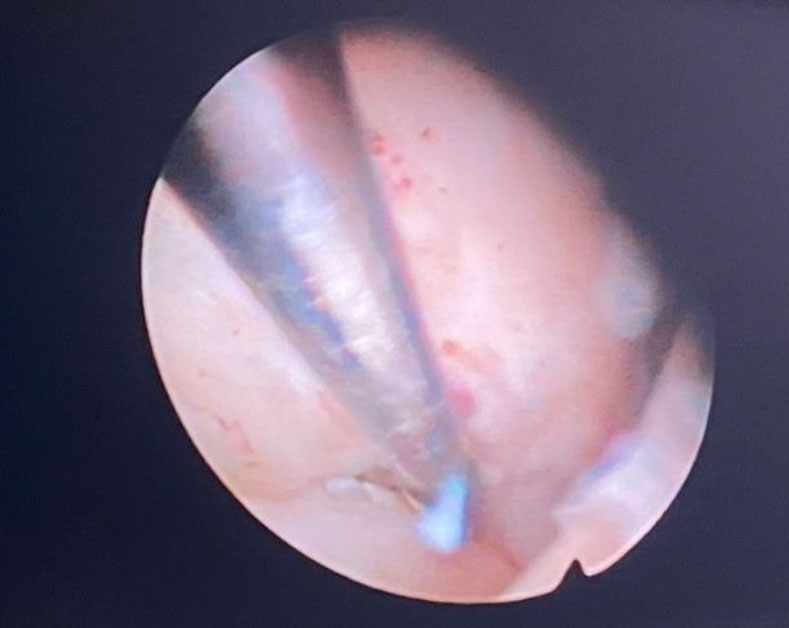 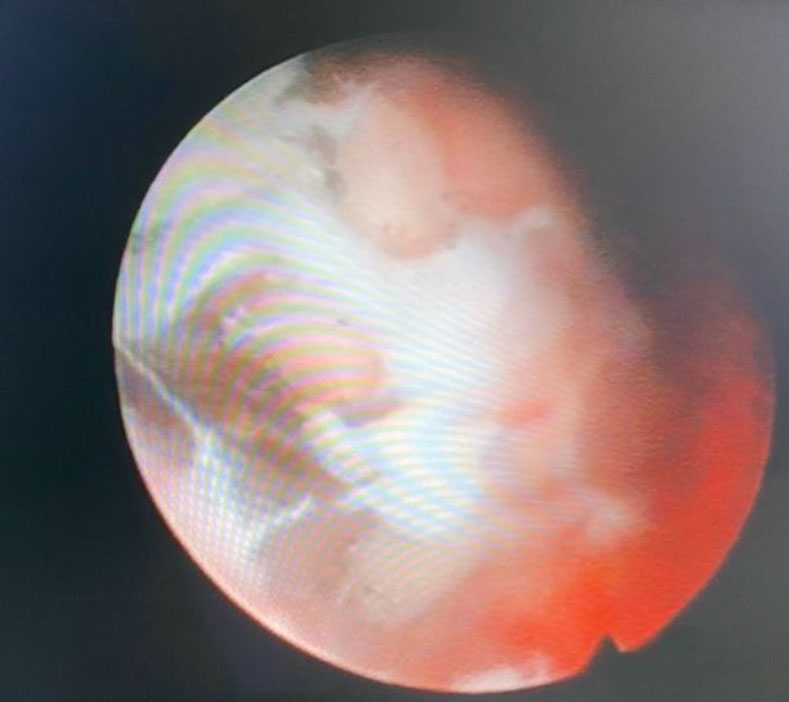 Figure 4. Both of submucosal myoma were successfully separated 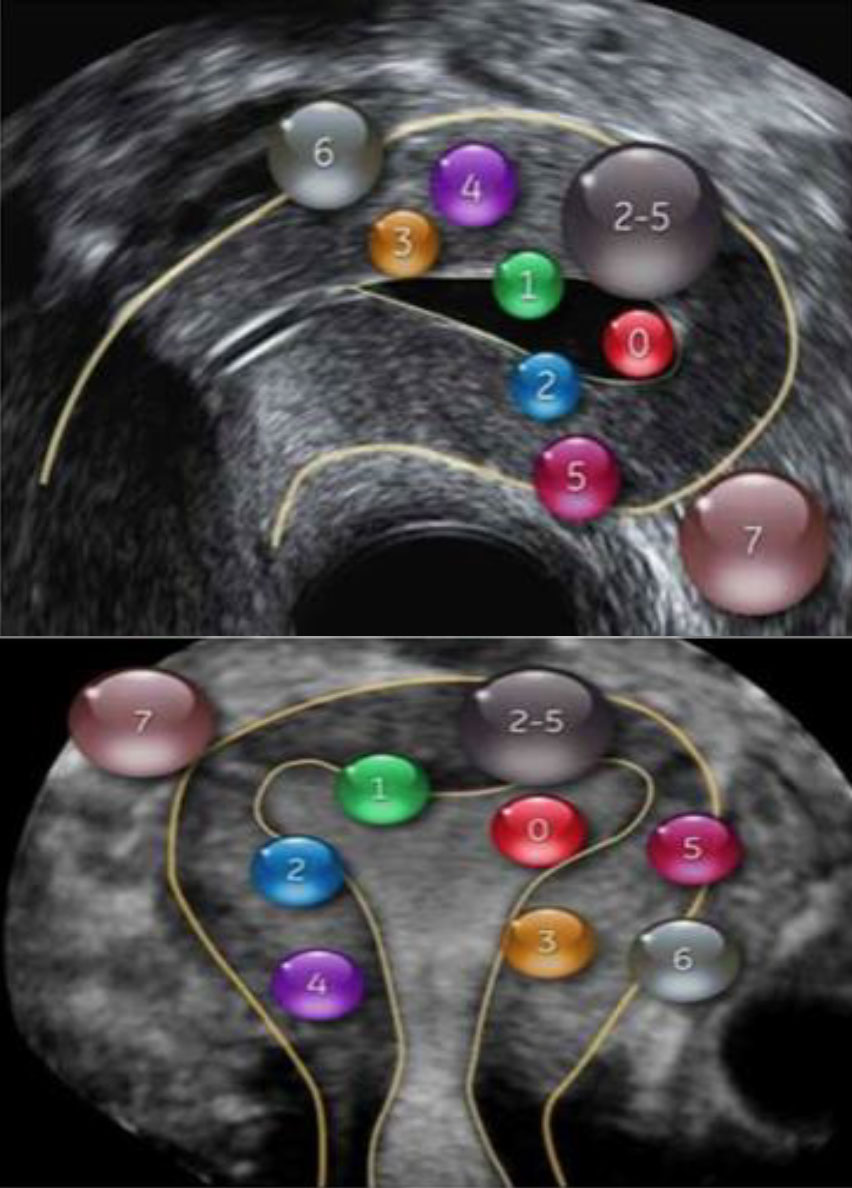 Uterine leiomyoma (myoma; fibroids) are benign monoclonal tumors arising from smooth muscle tissue. By 50 years of age, 70% of women will develop a uterine leiomyoma (Te Linde operative gynecology). Depending on their location in the uterus, they may be subserous, intramural, or submucous. Submucous myoma often lead to abnormal uterine bleeding, which may be accompanied by anemia. Hysteroscopic removal is the standard surgical approach for fibroids within the uterine cavity and currently represents the standard minimally invasive surgical procedure for treating submucous fibroids with abnormal uterine bleeding in perimenopause and postmenopausal woman (comprehensive). Lately the experts are still discussing whether or not removal of submucous myomas from the uterine cavity after hysteroscopic myomectomy is necessary. In this case report presented no extraction myoma after Hysteroscopic Myomectomy in post-menopausal woman and the myoma expulsed s through vagina in 21 days with uterotonic medication.

A 76-year-old woman with Para 3 Abortus 0, had menopause at 56-year-old, presented in with vaginal bleeding in the last 1 month. She had no hormonal replacement therapy given and no history of post coital bleeding in history. Preoperatively, a transvaginal ultrasound was performed, reporting a mix-echoic mass with smooth surface size 3×2 cm intracavity with the appearance of a sub-mucous leiomyoma. Patient had a Pap smear examination resulting negative for intraepithelial lesion. The Patient was considered to have submucosal leiomyoma and a hysteroscopic myomectomy was considered to reduce the complication of major surgery since she had hypertension and type 2 diabetes.

On arrival her blood pressure was 160/110 mmHg under anti-hypertensive drug therapy routinely for the past 12 years, other vitals were normal and rapid blood glucose was 246 mg/dL. No vaginal bleeding was detected on arrival. The night before the procedure, patient was administered 200 mcg intravaginal misoprostol.

Patient was brought under general anesthesia. Hysteroscopy was performed and two submucosal myomas were identified in the lateral and posterior surface of the uterine cavity with a protruding dome with regular surface hysteroscopic grading type G1 for both of myomata. The myometrial free margin was identified, a bipolar loop and hysteroscopic scissors were used to enucleate the myomas.

After successfully enucleation, the myomas were left in the uterine cavity because the volume found intra operative was larger than the ultrasound interpretation. Tissue samplings for histological diagnosis were taken and the characteristics of uterine cavity were evaluated. At the end of the procedure, the patient was observed for 30 minutes before leaving to ward and no reported pelvic pain or vaginal discharges/bleeding during follow-up within 24 hours did occur. The patient used one misoprostol tablet of 200 mcg twice a day for seven days and had a follow up for 21 days after the surgery to identify any complications, such as pain or vaginal discharges. The histological diagnosis was leiomyoma uteri and the mass was expulsed through vagina. The patient had no complaints and was satisfied with the result.

Uterine myomas or fibroids are the most common benign tumors of the female genital tract and are estimated to occur in about 40% at age 35 and almost 70% by age 50 in Caucasian women.1 The incidence of leiomyoma by the age of 50 is more than 80% in pre-menopausal women. Myoma often shrink after menopause, in the absence of post-menopausal estrogen replacement therapy, as they are estrogen dependent tumours2. The post-menopausal incidence of leiomyoma is not lower than the premenopausal incidence, although post-menopausal leiomyomas are smaller and fewer. At least one-fourth of these patients have symptoms, accounting for 5% of all gynecologic consultations. Leiomyomas are benign, well circumscribed, smooth muscle cell neoplasms and they are sharply demarcated from the surrounding myometrium or endometrium, depending upon their locations. Leiomyomas can be submucosal, intramural, subserosal or cervical in location.3

Submucous myomas (SMs) account for approximately 15 % of all uterine myomas and may cause irregular bleeding, pelvic pain, and infertility.4 Submucous myoma are defined and classified according to the European Society for Gynecological Endoscopy (ESGE) and International Federation of Gynecology and Obstetrics (FIGO) classifications. Depending on the proportion of the myoma protruding into the uterine cavity, SMs are classified in G0/Type-0 when the submucous is almost intracavitary, G1 or Type-1 > 50 % is intracavitary, and G2 or Type-2 50 % or more is intramural.5

The ability to remove these fibroids depends on the degree that fibroids are embedded in the myometrium. Hysteroscopic myomectomy is a minimally invasive transcervical procedure performed under direct visualization and constant visual control for removal of intracavitary and submucosal leiomyomas6. Besides giving us the certainty of the presence of the submucous fibroid, hysteroscopy also enables the assessment of the intracavity component of the mass, its localization, its relationship with the uterine structures, the characteristics of the endometrium as well as the presence of possible associated intracavitary pathologies. Furthermore, it provides subjective assessment of fibroid size and indirect information regarding the depth of myometrial extension. Type 0 fibroids are usually easy to remove. Type 1 lesions can often be completely removed, as the uterus contracts and tends to expel the intramural component into the uterine cavity during surgery. However, removal of type 2 fibroids can be problematic, as fluid overload or fear of perforation may lead to incomplete resection. Wamsteker et al. found that the likelihood of achieving complete removal of type 2 fibroids was only 50%. Therefore, the hysteroscopic removal of type 2 fibroids is questioned by several authors7. In the present case, the conclusion was that this patient had a type 1 lesion as found intraoperative, the myoma bed could be identified clearly and the myoma completely resected.

Studies do show that ambulatory hysteroscopic removal of submucous myomas carried out whilst leaving free the mass in the uterine cavity after enucleation is a feasible and safe procedure8. The enucleated fibroid doesn’t have vascularization and by reaching the stage of a smooth mass it can be pushed out without causing major discomfort. Most patients do not observe the myoma expulsion, as it is expelled during menstruation as a necrotic tissue. Only a minority of women reported the expulsion of a small fibroid. This observation is consistent with a satisfaction level that did not change based on the size and grade of the myoma, which without blood supply undergoes necrosis. These observations strengthen the feasibility and safety of omitting the mass extraction after SM enucleation8. However, in our case, the patient was menopausal for almost 20 years.

Menopause is characterized by a loss of regular menstruation and eventually permanent cessation of menses. One might assume that following the menopause, uterine activity ceases. However, rhythmical myometrial contractions have been seen by ultrasound examination in postmenopausal women and one previous study has reported low levels of spontaneous activity in strips from human post-menopausal myometrium in vitro9. Based on this, a misoprostol tablet 200mcg twice daily for 7 days was administered to our postmenopausal patient expecting the smooth muscle of uterus to contract properly and expulse the mass through vagina.

The risk of sarcomatous change is higher in menopausal women and increases with age (mainly >45 years)10. For this reason, a biopsy of the myoma was performed to exclude the possibility of malignancy and the biopsy result showed the mass is leiomyoma of uterus.

Hysteroscopic myomectomy without extraction of myomas in post-menopausal women aims to reduce discomfort, avoiding multiple insertions of the hysteroscope, shortening the surgery length and can be considered a safe option when the myoma extraction is difficult. However, low levels of spontaneous activity from the human post-menopausal myometrium to expulse the mass are present. Therefore, uterotonic medication might be needed but further research studies are required to confirm effectiveness and safety of this procedure.

I would like to thank all people that were involved in this case report especially the colleagues from Department of Obstetrics & Gynecology of Hasanuddin University for supporting the writing of the case study.
Disclosure:The author declares that there is no conflict of interest that related to the case study.