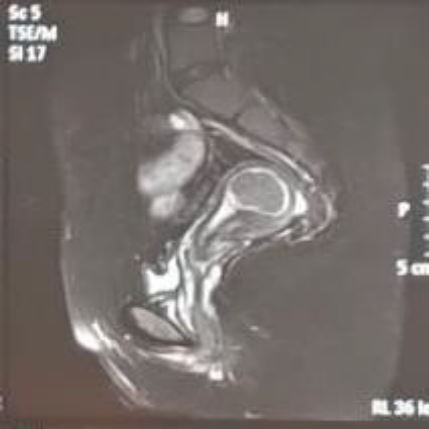 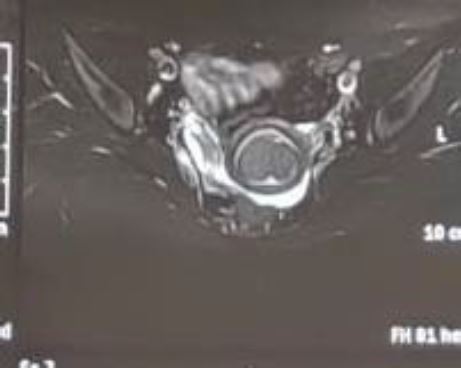 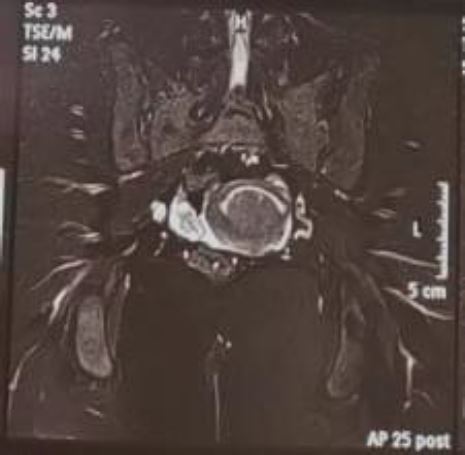 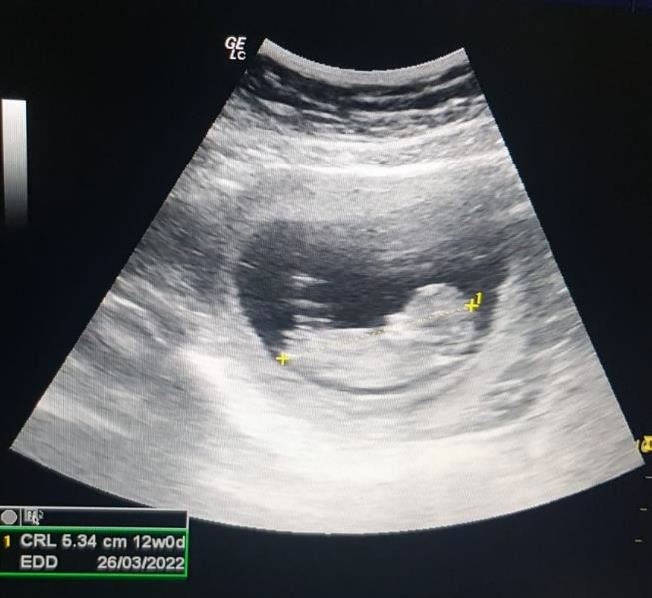 Figure 3. Ultrasound examination show a 12 weeks pregnancy with a crown rump length of 5.34 cm and a positive fetal heart beat

Uterine fibroids, in particular submucosal fibroid may significantly affect fertility and cause heavy menstrual bleeding. The incidence of myomas in infertile women is estimated between 1- 2.4%. In general submucous firboids account for 5 – 10% of all type of fibroids. Fertility rates may be increased following myomectomy when there is no other identifiable cause. This is a case report of a 22 year old woman with subfertility and heavy menstrual bleeding that had occurred for the last three months. Gynecologic examination revealed an enlarged and mobile uterus. Ultrasound examination showed a 40 mm mixechoic appearance arising from uterine cavity. It suggested a type I submucous myoma. Hysteroscopic myomectomy was scheduled to be performed by first administer GnRH agnoist for two cycles. Shortly after the last injection, the patient had COVID -19 and had to underwent self – quarantine. Following recovery of COVID – 19 infection, we decided to adminster extra shot of GnRH agonist before performing hysteroscopic myomectomy. Diagnostic hysteroscopy revealed a 40 mm type I submucous fibroid. Hysteroscopic myomectomy was performed with 5 Fr scissor in order to avoid electric current usage. Two months following hysteroscopic myomectomy, the patient had a positive pregnancny test result. The antenatal care was then continued as routine. Hysteroscopic myomectomy in submucosal fibroid may improved fertility and clinical pregnancy rates in patient without any other causes of infertility.

Myoma is a benign growth of uterine muscles. It occurs in 30 – 40 % women in their 30s or 40s but may occur at any ages. The association between myoma and infertility have not been established due to a large variety of the size, numbers, and location. The incidence of myomas in infertile women without any obvious cause of infertility is estimated between 1 – 2.4%.1 Only 5 – 10% fibroids are estimated to be submucous and tend to be symptomatic. Common symptoms include menorrhagia, intermenstrual bleeding, and infertility. Submucous fibroids are classified according ot the European Society of Hysteroscopy as: Type 0 (complete intracavitary myoma), Type I (50% of the myoma contained within myometrium).2

Many theories have been proposed to explain the effects of myomas on fertility. It is generally accepted that the location of a fibroid is an important factor in causing infertility. Submucous myoma is generally considered as the etiology of infertility.3 Myomas may cause dysfunctional uterine contractility, which may interfere with sperm migration, ovum transport, or nidation. Myomas may also be associated with implantation failure or gestation discontinuation due to focal endometrial vascular disturbances, endometrial inflammation, secretion of vasoactive substances or an enhanced endometrial androgen environment.4

Submucous fibroid myomectomy may be performed hysteroscopically, especially for type 0 and type I myoma. It is considered generally safe for one time operation without significant complications. Fertility rates after submucous myomectomy may increase when the fibroid is solely expected to be the etiology of the infertility.5 Our case report demonstrated a successful pregnancy following hysteroscopic submucous fibroid removal without evidence of any other causes of infertility.

A 22 – year – old married women was evaluated for menorrhagia occurred for three months. Apparently, she had been married for 8 months and never carried a pregnancy. Gynecologic examination revealed a slightly mobile enlarged uterus. The patient was then evaluated with transvaginal sonography which revealed an intracavitary mass suggestive of a submucous myoma. In order to ascertain the pathology, we perform pelvic CT – Scan to evaluate the extension of the myoma and other patologies that may be overlooked (Figure 1). The estimated size of the myoma was 40 mm. Other causes of infertility were excluded in both couples. Submucous fibroid was considered to be the solely cause of the infertility.

Following thorough consent, the patient agreed to undergo hysteroscopic myomectomy. GnRH agonist was intended to be administered for two shots (one month apart) before procedure. Unfortunately, following the last shot the patient had COVID –19 and need to be quarantined. She wasquarantined for two weeks. Followingrecovery of her COIVD – 19, an extra shot ofGnRH agonist was administered in order toreduce intraoperative haemorrhage.

Hysteroscopic procedure was then performed under spinal anesthesia. We first performed diagnostic hysterocsopy with 3 mm sheath. The uterus was distended with NaCl 0,9% to increase the margin of safety of fluid administration. Uterine pressure was constantly maintained at 100 mmHg. Fluid balance was constantly monitored in order to avoid fluid overload. Diagnostic hysteroscopy with 300 telescope revealed 40 x 40 x 35 mm Type I submucosal myoma (Figure 2a).

Following the diagnoistic hysteroscopy, myoma enucleation was performed in 5 mm working channel hysteroscope (Figure 2b). Myomectomy was performed by cutting of the base of the myoma with 5 Fr scissor combined with hydromassage in order to facilitate myoma protrusion. The electric current was avoided in order to not damage the endometrial layer. The procedure lasted for 30 minutes and completed without remarkable complications.

Uterine fibroids may be the etiology of infertility by produce a mechanical distortion of endometrial cavity, compression of the endometrium, blockage of tubal ostia, and altering uterine contractility as well as tubal peristalsis.6 In particular, submucosal fibroids may significantly decreased endometrial receptivity especially for HOXA10 gene. Besides, submucosal fibroid has thicker pseudocapsule in comparison with intramural and subserosal fibroid. This characteristic may significantly reduce clinical pregnancy rates.7 In conjunction with subfertility, our patient also suffered from heavy menstrual bleeding that had occurred for the last three months. Submucosal fibroid may cause heavy menstrual bleeding by increase the uterine surface area, increase vascularity and vascular flow into the uterus, reduce myometrial contractility especially of the inner junctional zone, endometrial ulceration, and compression of the venous plexus within myomeytium.8

Submucosal myoma was classified by International Federation of Gynecology and Obstetrics depending on the proportion of myoma protruded into uterine cavity (Figure 4). G0 or Type 0 myoma is almost entirely intracavitary, G1 or Type 1 myoma is 50% intracavitary and G2 or Type 2 myoma is 50% intracavitary.9 The benefits of hysteroscopic myomectomy of submucous myomas for improving the chance of pregnancy rates and term delivery are still debatable. There are three factors that may determine the feasibility of hysteroscopic myomectomy, the degree of intramural extension, the myoma size, and the myoma consistency.10 Technical factors such as the surgeon’s skill and experience as well as techniques used surely play an important role. In our case, the patient had type I submucosal myoma which may be the sole etiology of her infertility. Hysteroscopic myomectomy once conisdered to increased fertility rate in submucous myoma. Hysteroscopic myomectomy in submucuousal fibroid is techniquely challenging especially in infertility case. We prefer to perform the more conservative strategy in order to preserve endometrial layer by not introducing electric current.

Gonadotropin – releasing hormone analogue (GnRHa) once considered the main indication for the preoperative use before performing submucous myomectomy. Many studies had described a significant reduction in terms of the size, absorption of distention media, and bleeding after GnRHa administration.11,12 Well – controlled bleeding was our main priority due to avoidance of using electricity during surgery. Our case showed that GnRHa administration may reduce the amount of blood intraoperatively. However, GnRHa administration is burdened by high cost, side effects, and increased risk of uterine perforation.13