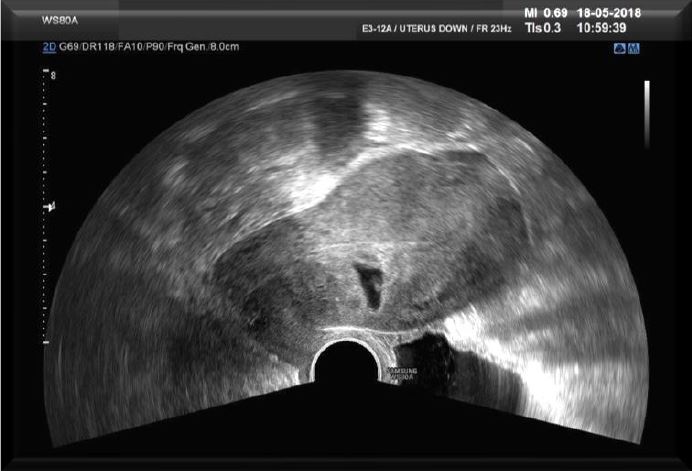 Fig 1a first case describedTVS shows an ectopic pregnancy in the lower segment of the anterior uterine wall and an empty cervical canal and uterine cavity (Type 1 CSP). 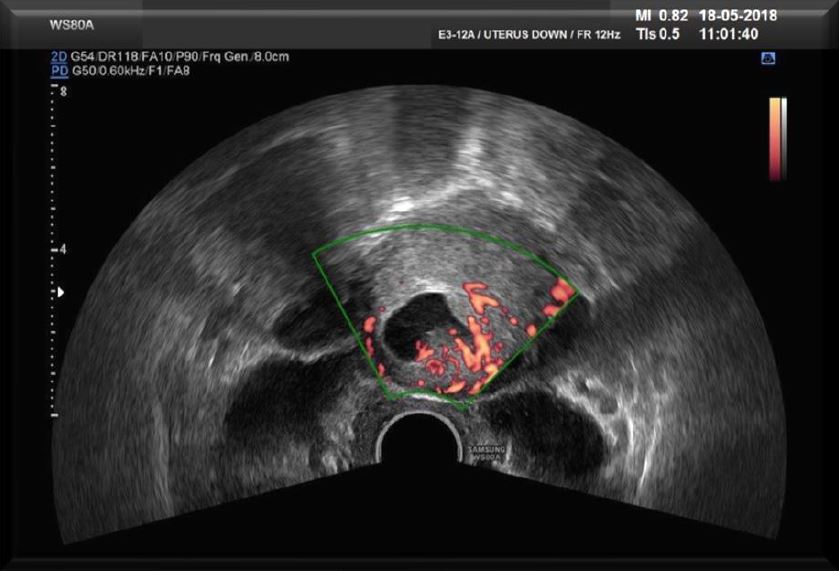 Fig 1b first case described on transverse scan the diagnosis of an implantation of the placenta right cranial – to the cervical canal – to fundal – towards the uterine cavity – on the longitudinal axis can be made easier by Doppler imaging (Type 1 CSP). Fig 2a first case described Hysteroscopic image of the CSP confirming the diagnosis of the TVU Placentation cranial to the right (left of the patient). 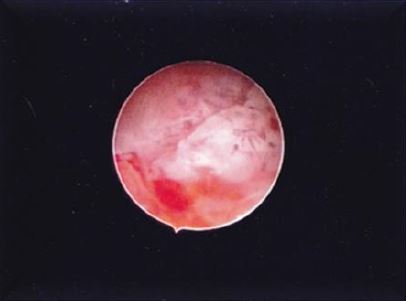 Fig 2b first case described Detail of the placental tissues. 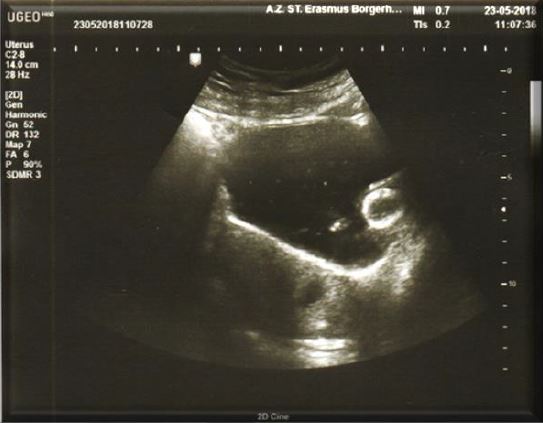 Fig 3 a first case described: Image of the technique described the balloon of the Foley catheter and the amnion sac are clearly visible. 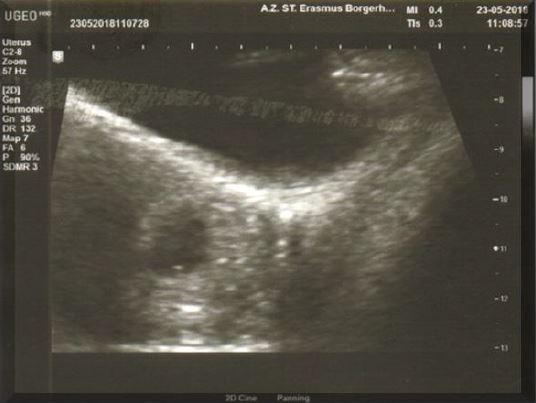 Fig 3 b first case described: Detail of the amnion sac.

Fig 4 A third case described: VUS I* cervical canal, partially dilated by the pregnancy in the upper part, with the pregnancy extending towards the bladder type 2 CSP.

Fig. 4 B third case described: Saline Infused Sonography (SIS) Abdominal US with filled bladder. The uterine cavity is clearly seen at the right-hand side of the picture with in the lower part of the image the pregnancy extending towards the bladder no residual tissue can be made out between bladder and CSP (Type 2 CSP).

Objective: This case report covers three incidences of Caesarean Scar Pregnancy (CSP). Description of the diagnostic modalities and treatment in the specific cases is given whilst a literature search with MeSH terms Caesarean Scar and Pregnancy has been carried out on PubMed.

Background: CSP is a rather exceptional, but potentially severe form of ectopic pregnancy where the implantation is situated in the Caesarean Scar tissues after a previous Caesarean Section (C/S). Left untreated CSP can cause severe complications, i.e., severe haemorrhage and uterine rupture necessitating surgical intervention and possible emergency hysterectomy. The first case of CSP has been reported in 1978 by Larsen and Solomon and the incidence increases due to the increasing percentage of C/S and the improvement of the Diagnostic Ultrasound (DU) techniques. Due to the increasing incidence of CSP it becomes important to report more cases and to review the treatment options and results.

Methods: the articles describe the treatment under direct view by hysteroscopy combined with ultrasonic guidance by trans abdominal probe over a filled bladder and in one case the treatment by laparoscopy of a complication occurring during hysteroscopic removal of retained products of conception (RPOC).

Conclusions: CSP is a rare form of ectopic pregnancy this explains the fact that there is not yet a consensus on the ideal method of treatment. In view of the increasing numbers of C/S the incidence of SCP will definitively increase leading to more reports on the diagnosis and the treatment of this form of ectopic pregnancy. A number of medical and surgical approaches to this condition have been tried with the aim to eliminate the pregnancy and to preserve future fertility. In the reported cases, the preferred method of treatment has been an ultrasound guided operative hysteroscopy.

CSP is a rather exceptional, but potentially severe form of ectopic pregnancy where the implantation is situated in the Caesarean Scar tissues after a previous Caesarean Section (C/S) (1). Left untreated CSP can cause severe complications, i.e., severe haemorrhage and uterine rupture necessitating surgical intervention and possible emergency hysterectomy (2-3). The first case of CSP has been reported in 1978 by Larsen and Solomon and the incidence increases due to the increasing percentage of C/S and the improvement of the Diagnostic Ultrasound (DU) techniques (4,5,6,7). There are two types of CSP: Type 1 (endogenic) with progression to the cervicoisthmic space or uterine cavity and Type 2 (exogenic) progressing towards the bladder and the abdominal cavity (8) Due to the increasing incidence of CSP it becomes important to report more cases and to review the treatment options and results (9).

The first case concerns a 43-year-old woman, G3P2A0, having a C/S in her obstetrical history. The patient decided to terminate this third pregnancy as the pregnancy was an unwanted one. Lab test did show a -hCG of 1172 mIU/ml. Trans Vaginal Ultrasound (TVS) (Fig 1a) did reveal a pregnancy with an embryo but no heartbeat, on the anterior side of the uterus at the level of the C/S scar with a diameter of 20 mm conform with the amenorrhoea of six weeks and six days (6 2/7). These findings did lead to the diagnosis of CSP. As treatment the choice was made to use a surgical management by hysteroscopy. The patient was submitted to a series of TVU with Doppler flow (Fig 1b) Patient was brought under general anaesthesia followed by an ultrasound guided hysteroscopic evacuation (Fig 2) of the CSP.

The technique used was abdominal ultrasound over a distended bladder (6) (Fig 3a – 3b). The advantage of a bladder filled over the fundus of the uterus is twofold: the uterus is stretched over its longitudinal axis whilst the hysteroscope and the mechanical instruments are clearly delineated by the abdominal ultrasound technique in relation to the surrounding uterine tissues. This allows for objective measurements of the latter during the intervention (10). The uterine cervix has been mechanically dilated up to Hegar 9. The whole of the uterine cavity has been visualised by the abdominal ultrasound and the location of the decidual tissue mass confirmed. The pregnancy has been removed by hysteroscopy using mechanical graspers and terminated by curettage under ultrasound guidance. Control hysteroscopy has been performed; haemostasis secured by bipolar needle technique. The hysteroscope used was a rigid scope with 5 mm outer diameter and a 5 French operating channel. The distention medium used was physiologic solution of 9% Na.

The second case relates to a 37-year-old patient G3P2 with two Cesarean Sections in her history referred by her consultant with the diagnosis of CSP at 6 weeks of pregnancy with a βHCG of 1124 mIU/ml and on ultrasound suspicion of a cervical pregnancy. A hysteroscopic removal under general anaesthesia using a 26 French classical resectoscope with a 6 mm loop with was chosen for. The loop was used as a cold loop for the removal of the RPOC. An ultrasound follow-up was performed the day after the hysteroscopy and 10 days later (Video 1).

The third case is one where hysteroscopic removal of RPOC created a complication This case relates to a woman of 33 years old G3 P2 who had undergone two previous CS. The first one in 2015 and the second in 2017. The two babies are alive without any problems. The patient did not present any symptoms after her two CS. The patient did not have any other medical or surgical history. She was referred to explore a chronic pelvic pain associated with an amenorrhea of 14 weeks and 4 days. Her medical exam was negative except for a small vaginal bleeding. VU showed an echoic heterogenous formation of 6 mm in diameter just at the level of the scar of her previous CS no measurable residual myometrium behind the bladder (Fig 4a-4b). The doppler signal was poor. A βHCG was positive at 2500 mIU/ml.

After a thorough discussion with the couple, hysteroscopy has been chosen as the technique to start to diagnose and try to retrieve the RPOC. Furthermore, all the possible situations and complications were well documented and discussed.
During hysteroscopy under spinal anaesthesia and ultrasound (US) guidance the hysteroscopy did reveal a CSP. The uterine cavity was empty at Saline Infusion Sonography (SIS) at hysteroscopy a clear vision of both ostia was obtained the endometrium appeared to be normal confirming it to be a Type 2 CSP. (Video 2)

As a second step a dilation of the cervix up to Hegar 10 was performed under spinal anaesthesia and a bipolar 26 French with a 30-degree fore oblique lens and a loop of 4 mm was introduced in order to separate mechanically the trophoblastic tissue. This manoeuvre was possible but difficult because of the volume and the deep insertion of the RPOC. (Video 3)

During the mechanical separation a niche perforation at the right lateral side was clearly seen. At that moment it was decided to end the vaginal procedure and to convert to laparoscopy under general anaesthesia. During the laparoscopy there was a lot of liquid inside of the abdominal cavity confirming the perforation, after the aspiration RPOC were found and at the right lateral side of the isthmus a possible perforation was suspected just under the bladder (Fig 5). A cystoscopy was performed and confirmed the bladder to be intact. The intraabdominal liquid was aspirated and the RPOC were extracted with a bag. The bladder was dissected and the defect was sutured by Vicryl 1 using 4 separated stiches. A drain was inserted in the Douglas. Postoperatively the patient did not present problems, the drain was removed and patient could be discharged on day four.

Clinical Symptoms: One third of the patients are asymptomatic. Vaginal bleeding and abdominal discomfort are key symptoms. The latter being the reason that diagnosis CSP is often confused with other conditions like spontaneous abortion or cervico-isthmic pregnancy. It is mandatory to make an early diagnosis of CSP to prevent severe complications (11,12,13).

A normal pregnancy of a SCP is extremely rare. A total hysterectomy is often necessary due to the enhanced risk of placenta praevia or accreta followed by massive bleeding. Literature suggests to council for active interruption of the pregnancy in view of the above-mentioned complications (12). However, when heartbeat is absent an expectant management can be adopted as here the course is more often one of a spontaneous abortion without severe maternal complications (9).

As the incidence of SCP is rare there is no consensus on a standard of care (15,16,17). If an active management is opted for the consensus is to treat the earliest possible in view to prevent the potential severe complications (18). There are many medical (foetocide medication by systemic or location administration of methotrexate) (19) and surgical (Dilatation & Curettage -D&C, hysteroscopy, laparoscopy, laparotomy or hysterectomy) treatments all with the aim to eliminate the pregnancy with or without preservation of the future fertility (5,11,12,14, 20,21)

Treatment by hysteroscopy under ultrasound guidance is a minimal invasive technique with lots of advantages (16). The definitive diagnosis is made under direct visualisation. The treatment by asportation of the pregnancy tissues and the meticulous coagulation of the bleeders is also made under direct visualisation. The main advantage being: fast recovery and faster return to normal fertility. The main risk consists of perforation of the scar tissue with possible damage to the bladder wall when the distance of the anterior wall of the uterus as measured by ultrasound reveals to be very thin (17). Consensus in the literature suggest that an intervention by operative hysteroscopy and hence an intra-uterine approach is safe when the thickness of the myometrial tissue at the location of the SCP is > 2 mm and the implantation surface of the pregnancy is of < 3 cm or when pregnancy evolves towards the cervico-isthmic portion of the uterine cavity (type 2). Several successful cases of the intrauterine approach have been described in literature (12,14,17).

SCP is a rare form of ectopic pregnancy this explains the fact that there is not yet a consensus on the ideal method of treatment. In view of the increasing numbers of C/S the incidence of SCP will definitively increase leading to more reports on the diagnosis and the treatment of this form of ectopic pregnancy. A number of medical and surgical approaches to this condition have been tried with the aim to eliminate the pregnancy and to preserve future fertility (9,15,16,19,20,21). In this report in the cases presented the preferred method of treatment has been an ultrasound guided operative hysteroscopy (Fig 3).

Aknowledgements: The authors want to thank Bruno J van Herendael for his guidance and constructive criticism of their work.