How to reduce operation time in Pectopexy using a wire stapler?

How to reduce operation time in Pectopexy using a wire stapler? 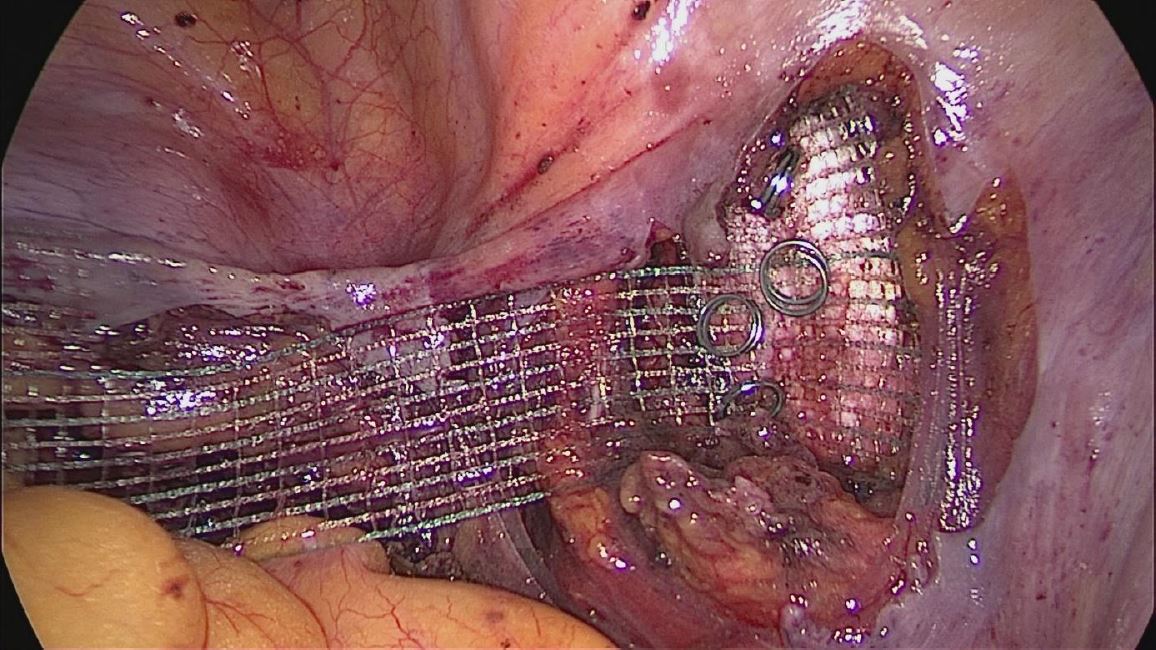 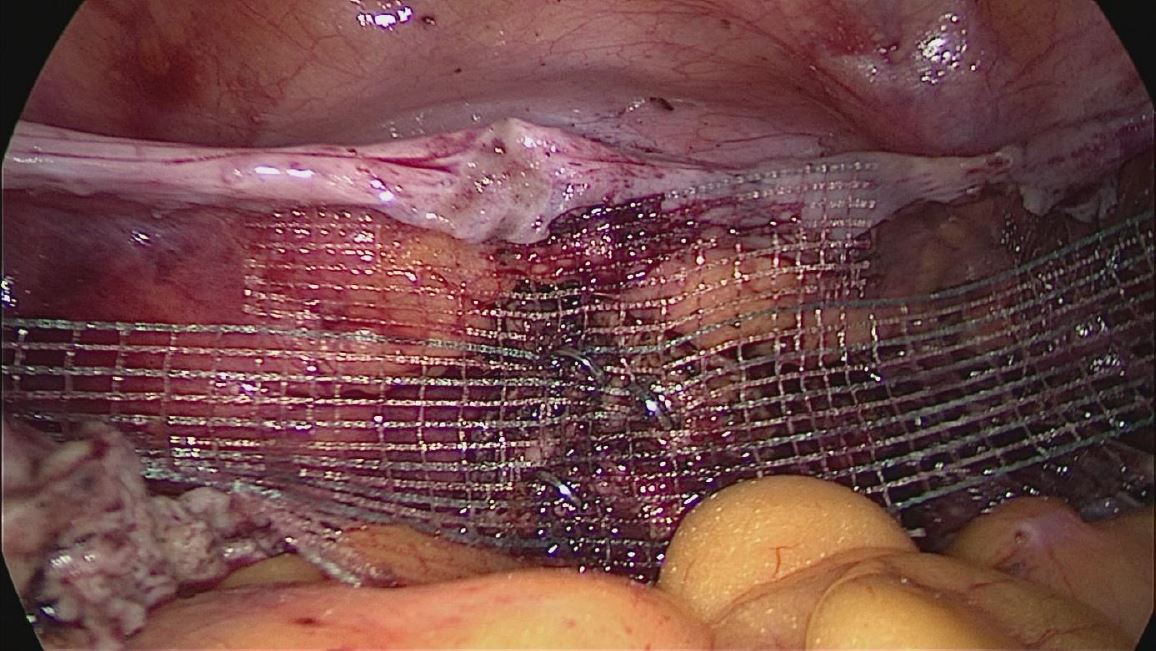 Table 1: shows the total stapler time bi-lateral and at the cervix and the time used for the additional sutures (minutes used and range) 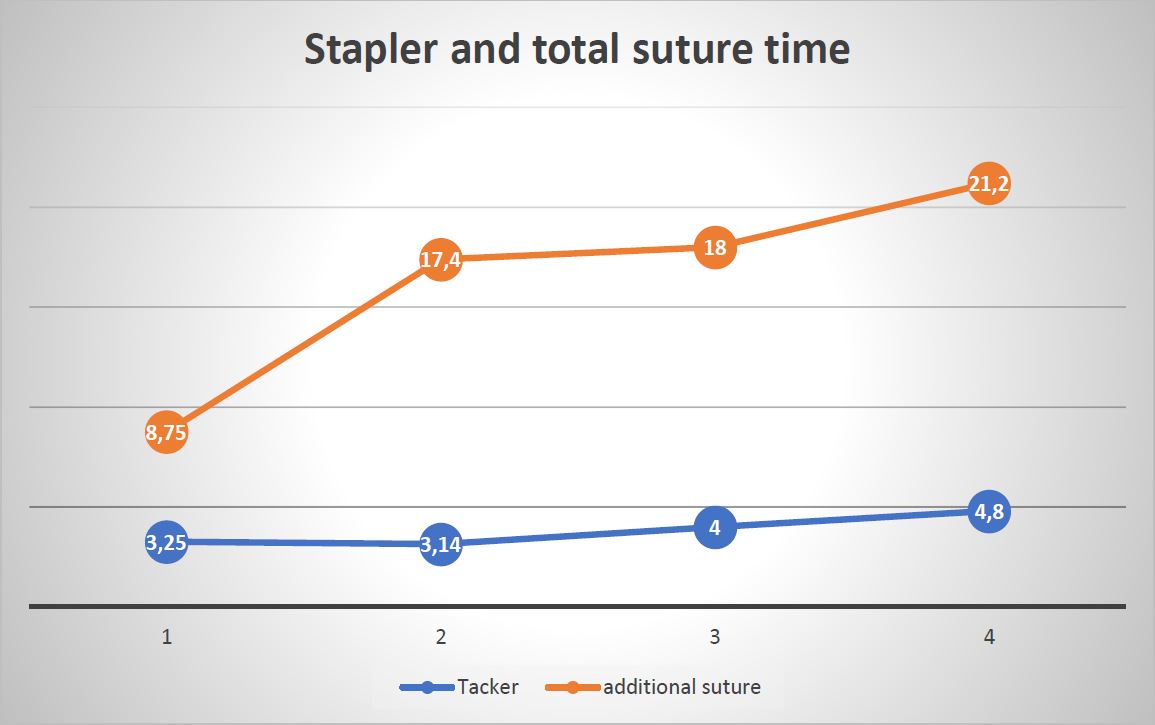 Figure 1: shows the difference between time for tacker use and the additional suture 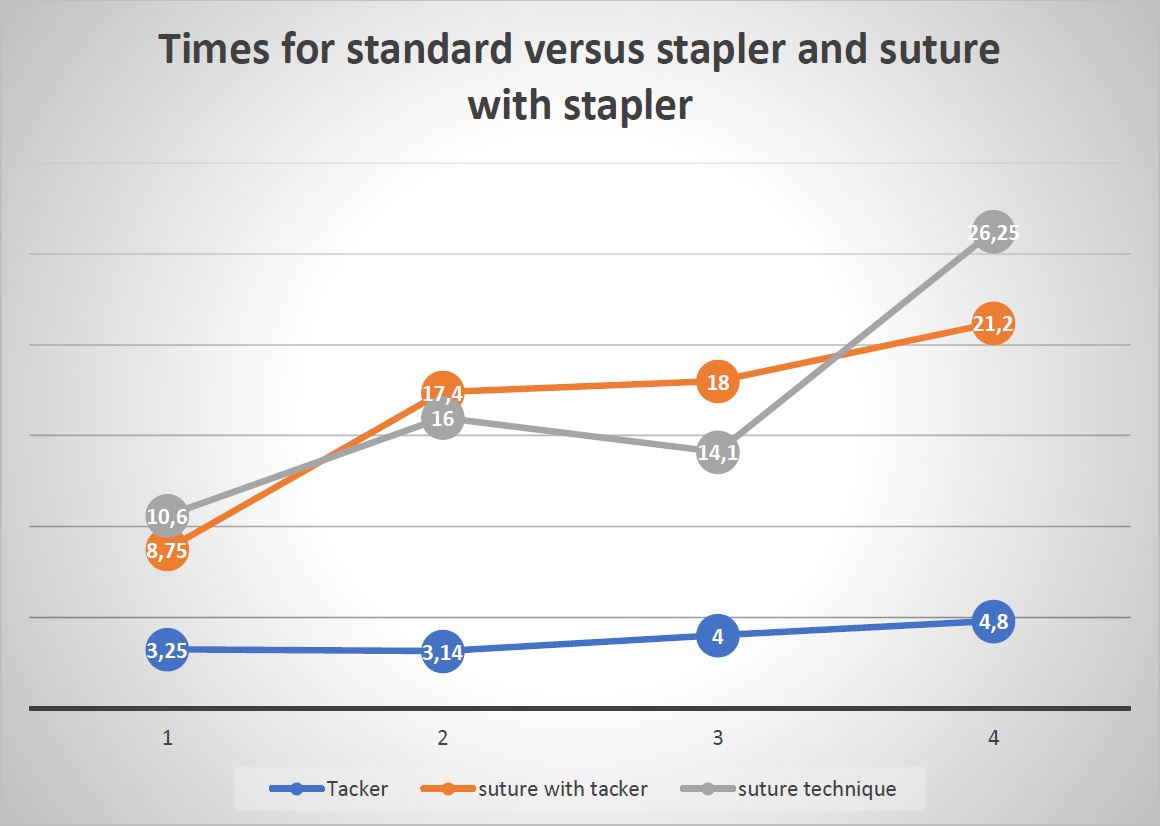 Figure 2: shows in gray the suture time of surgeon 1 to 4 in comparison to the single stapler time in blue and the combined suture time. 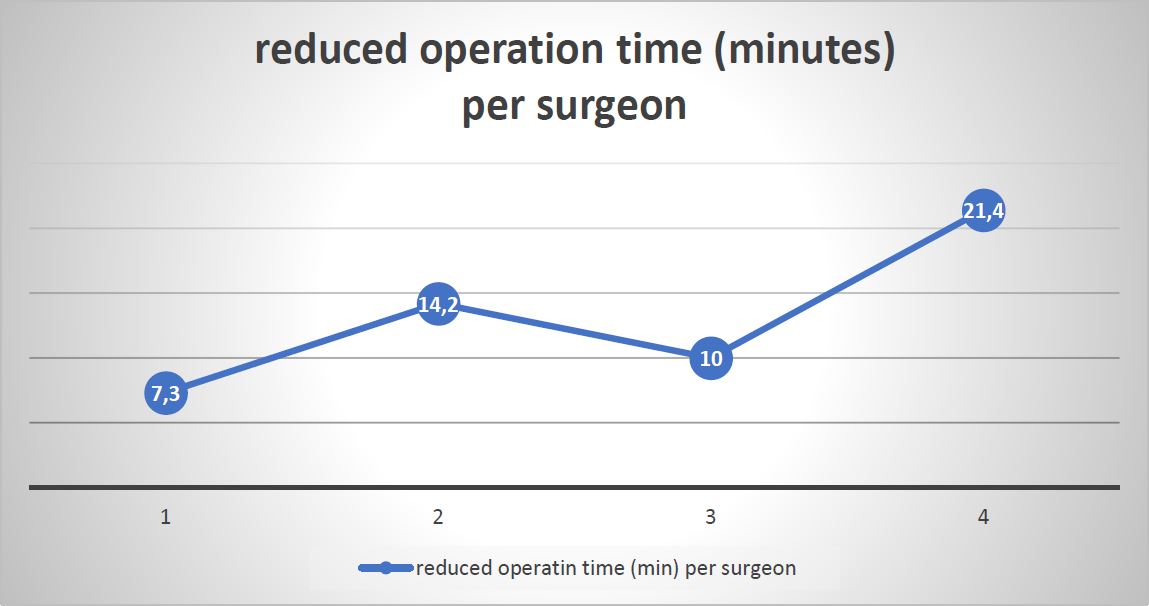 Figure 3: shows the theoretical reduced operation time when only a stapler is used for Pectopexy in minutes.

Introduction: In recent years, the importance of laparoscopic procedures for the treatment of genital prolapse has increased significantly. In addition to the traditional “gold standard” Sacropexy, new processes have become established. One of the most scientifically studied is the Pectopexy. In order to make the techniques easier and faster, the necessary mesh interpositions have been attached with staplers for years. We initiated this study to check whether the pectopexy can be performed faster using staplers.

Material and method: With the pectopexy, the ligament used is not suitable for standard staplers. Therefore, we used a wire-based stapler from the manufacturer Microval™ (SPIRE`IT). 4 surgeons of different experience used the stapler. The time required for the traditional individual suture times was compared with the pure stapler time. In addition, the impact on the time used when additional securing stitches were performed. In addition, we have compared the time advantage to the surgeon’s experience with the technique.

Results: All surgeons benefited comparably with a reduction in operating time of between 70% and 82% when comparing the use of the stapler alone with standard suture technique. The absolute reduction was measured between 7.3 to 21 minutes. The time spent was clearly due to the experience of the user. Summary: The use of special staplers can significantly shorten the operation time of pectopexy. For high volume users (over 100 procedures per year) it is certainly not cost effective to use. For most surgeons, the use of staplers is very helpful in the learning phase and, in the case of rather small operation volumes, also in the long term.

Prolapse surgery emerged in the late 19th century. During this time, the basics for the well-known vaginal surgical procedures were developed (1). At the beginning of the 20th century, the so-called Manchester technique emerged, which was introduced by Fothergill in 1921 (2). The cervix is cut and the parametrium is sewn onto the uterus. This method is still used today in many counties. The first sacropexy was described by Küstner in 1910 (3). Since the end of the vagina was sewn directly to the promontory due to a lack of bridging material, excessive tension arose with ventral displacement of the bladder and wide opening of the cul-de-sac. In 1951, the sacro-spinous fixation, which a.o. was described by Amreich and Richter (4), prevailed and is still used today. An attempt to use allografts to fix the apex was first described in 1952 by G.A. Williams and A.C. Richardson. They prepared two strips of aponeurosis, which were guided laterally past the rectus abdominis muscle and then sewn to the end of the vagina. However, since the length of the fascial strips is very limited, the apex is also strongly ventralized with this technique, with the resulting side effects (5).

The success story of sacropexy began in 1962, when Lane fixed the vagina to the longitudinal ligament of the sacrum using a mesh interposition and was thus able to fix the vagina in its natural axis with little tension (6). Since that time, multiple modifications have been described. Numerous cohort data with very good healing rates have been published. This has made this technique the so-called “gold standard” against which other techniques have to be measured (7-9).

In the early 1990s, surgeons such as Nezhat and Dorsey adapted the technique laparoscopically. Although the authors mentioned above paid attention to restore the correct axis of the vagina and performed a deep fixation to the sacrum (10), the majority of surgeons today prefer to use the promontory as a cranial fixation point for feasibility reasons.

Today there are many different approaches, which makes comparability difficult or impossible. Traditionally, the end of the vagina or the cervix (possibly also the uterus) is fixed to the sacrum using a Y-meshes. Defects in other compartments are additionally treated using other techniques (vaginally or laparoscopically) (9, 11). The approach of tackling all defects with one technique has also become widespread. Bladder and rectum are widely dissected and the vagina is generously covered with mesh material ventrally and dorsally. This is joined at the apex and then fixed to the promontory by means of an extension (12-14). The majority of the studies are monocentric, they show good long-term results, but sometimes very different rates of side effects. The occurrence of de novo stress incontinence differs noticeably (6-50%). As a rule, only older studies report on defecation disorders, although the problem is well known. The narrowing of the pelvis and the disruption of the hypogastric plexus probably play a major role here (15).

According to studies, 17-34% de novo defecation problems after sacropexy must be expected (7, 16-18). These can manifest as sluggish bowel movements, chronic bloating, painful defecation, or mild to severe constipation. If the mesh or nerve damage is the cause, the problem cannot be solved or can only be solved with difficulty.

Obese patients in particular often have narrow conditions in the pelvis. In addition to a higher proportion of retroperitoneal fat, there is often a largely immobile colon after diverticulitis has passed. Especially for the latter, an even worse intestinal passage is a great disadvantage. To circumvent the surgical difficulties, we developed pectopexy in 2007 (19). Randomized studies (comparing Pectopexy to Sacropexy) showed the equivalence of the method and confirmed the fewer problems with defecation. Pectopexy was able to establish as a new procedure and offers uro-gynecologists the advantage to combine very good results with low surgical risk. This provides a good alternative to classic sacropexy for surgeons with laparoscopic practice. In the long-term evaluation of the comparative study, we were able to measure a satisfaction rate of 95.1 or 97.6% after 1.5-3.1 years(20). A large international multicentre study confirmed the good feasibility when the method was applied outside the centre of excellence where this approach was developed (21).

In time of mesh discussion, especially in vaginal surgery laparoscopic uro-gynecological procedures are used more and more focussing on less mesh use (22). Native Tissue use and uterus preservation are progressing (23, 24) which requires more training and specialization.
In sacropexy, a tacker is very often used to attach the mesh to the sacrum in order to keep the operation time short. Elaborate sewing work is also necessary with the Pectopexy in order to attach the mesh centrally and bilaterally. The classic spiral tackers seemed to penetrate too deeply into the tissue to be used on the pectineal ligament. Since the suture is very tiring, especially for beginners, we looked for a support and found a suture-like stapler that only goes flat, like a needle, under the ligament.

In order to achieve a suture-like fastening, especially the lateral fastening, the SPIRE’IT ™ instrument made by the MICROVAL™ company was used. This contains a heat-sensitive wire that curls up after it exits the device. As a result, it undercuts the ligament like a needle and does not penetrate into the periosteum. The instrument is regularly used for the mesh fixation in sacro-colpopexy.

Four surgeons participated in the study. Two of the surgeons had already performed several hundred procedures, the third about 100 and one the first 20 procedures. In total, SPIRE’IT™ was used 30 times. The lateral attachment was performed by using 3-4 spiral taks (Fig. 1) In addition, lateral sutures were applied. The cervix was only sutured, usually only 2 staplers were used as situation suture (Fig 2). The sewing times as well as the time for using the tacker were measured. In addition, the suturing times for interventions without a tacker were determined and compared.

The documentation and statistics were performed with Excel (Microsoft) and Sigmaplot (Systat Software GmbH). First question was “does every surgeon benefit from using additional taker? Second “ is it cost-effective to use a taker in every situation or by every surgeon. The aim of the investigation was to find out whether the use of a tacker, which is associated with higher costs, can correspondingly accelerate the intervention.

The analysis shows that the times for using the stapler are very similar for all surgeons. Although there was still an absolute difference of 33% between the fastest and the slowest, this only plays a minor role due to the significantly shorter time. All surgeons benefited comparably with a reduction in operating time of between 70% and 82% when comparing the use of the stapler alone with standard suture technique.

Pectopexy has become widespread in recent years and laparoscopic procedures are enjoying increasing popularity. However, the learning curves are very flat, especially for low-volume surgeons, which generates a demand for the simplification of the technique. The use of staplers is very common in sacropexy but is subject to the anatomical peculiarity of the pectineal ligament in pectopexy(23, 24).

As the results show, the use of staplers can also enable a significantly faster operation in pectopexy. Both advanced and beginners benefit from this. Although the relative reduction is close for everyone (70-82%), the absolute reduction (7.3-21 minutes) is only financially interesting for low-volume surgeons. In addition, it must be said that we could not check the reliability because we only considered the time differences in this study. However, the SPIRE’IT tacker has been in use for sacropexy for a long time, which ultimately could allow for an analogy.

As long as safety sutures are applied, no significant advantage can be measured. Since Pectopexy is very often combined with native tissue repair, the use of stapler is certainly advantageous for many surgeons. Further studies that determine long-term data for the pure use of the SPIRE’IT stapler are desirable in order to be able to give a final recommendation.

The #Enzian classification is the first comprehensive system to describe endometriosis as completely as possible and to provide a useful tool for various diagnostic procedures. The coding takes into account all affected anatomical structures, including the very complex manifestation of TIE and also less frequently detected localizations.

The possibility to use the classification also in the context of non-invasive diagnostics (ultrasound and MRI) and in combination with surgery simplifies the interdisciplinary procedure. A reduction of the collected findings to an overall stage (stage 1-4) as in rASRM is deliberately avoided in #Enzian in order to depict the extent of the disease in an optimal way.
The positive findings to date in the application of the #Enzian classification show good applicability and high accuracy with regard to the reproducibility of the findings and the correlation with the complexity of the disease and its treatment.