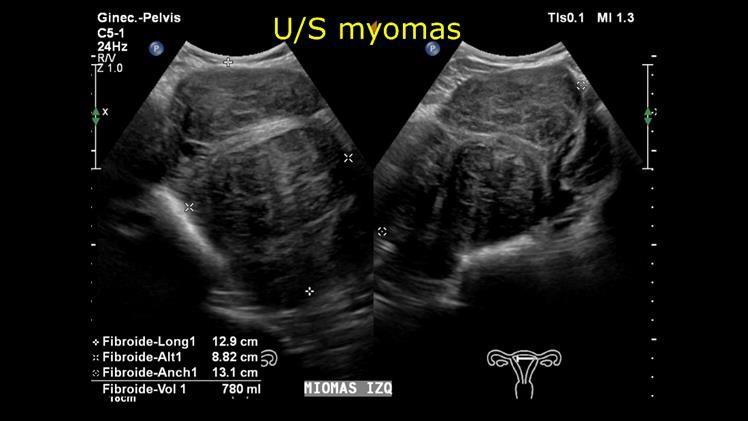 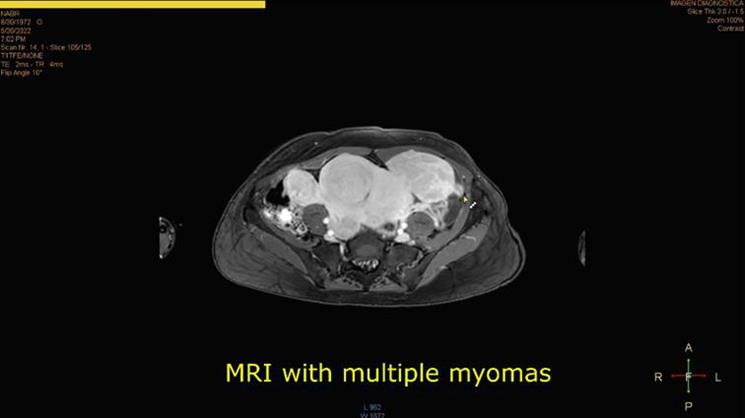 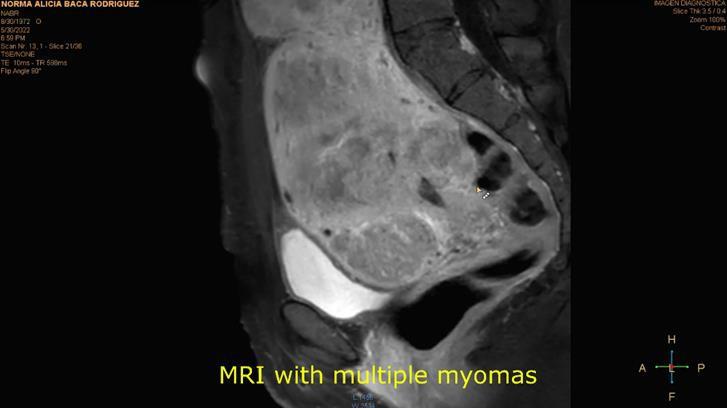 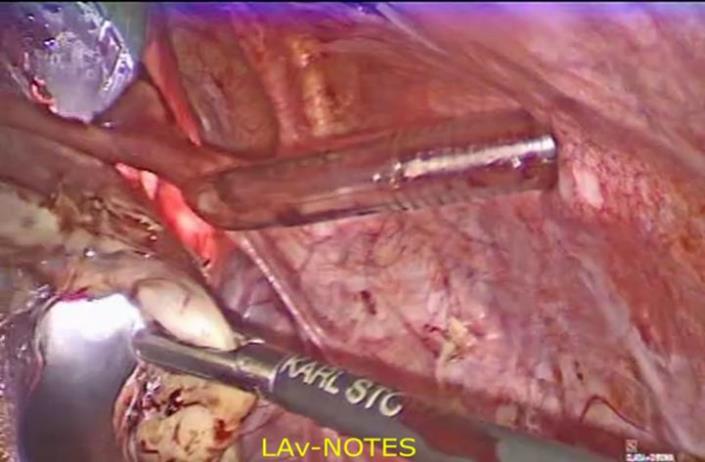 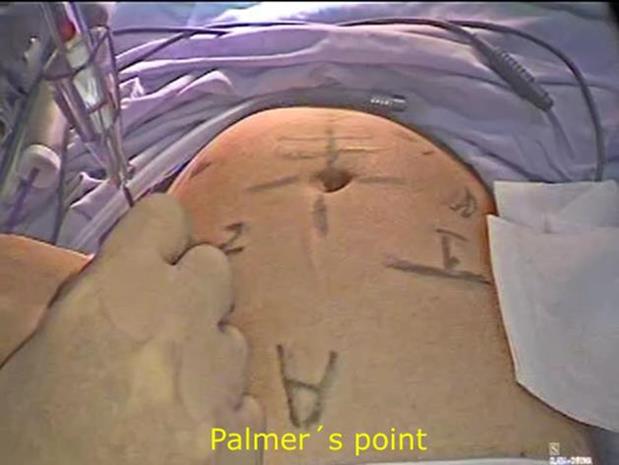 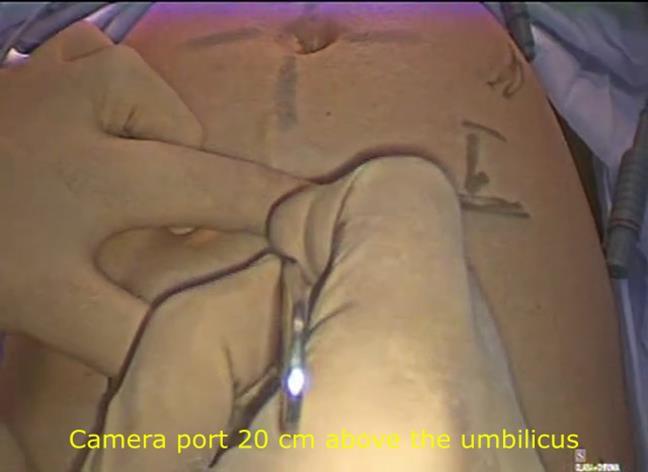 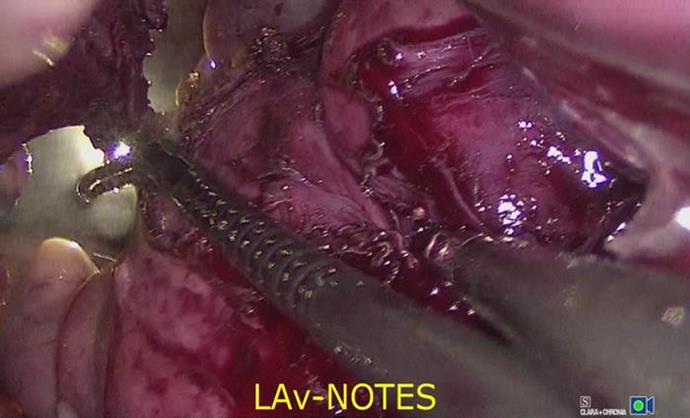 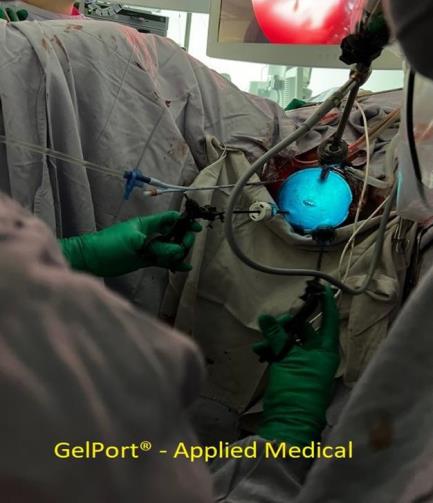 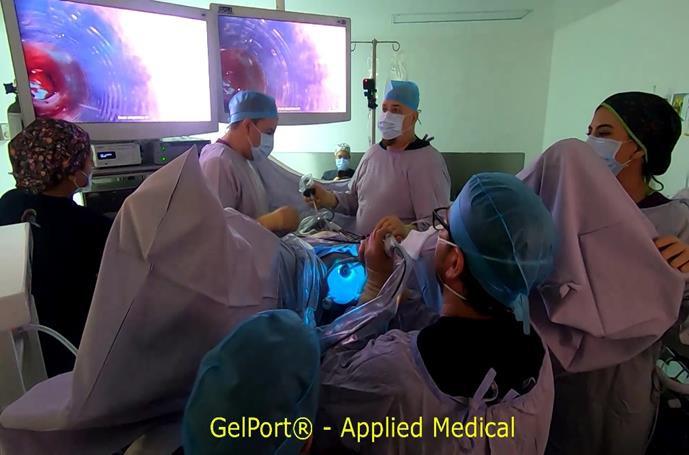 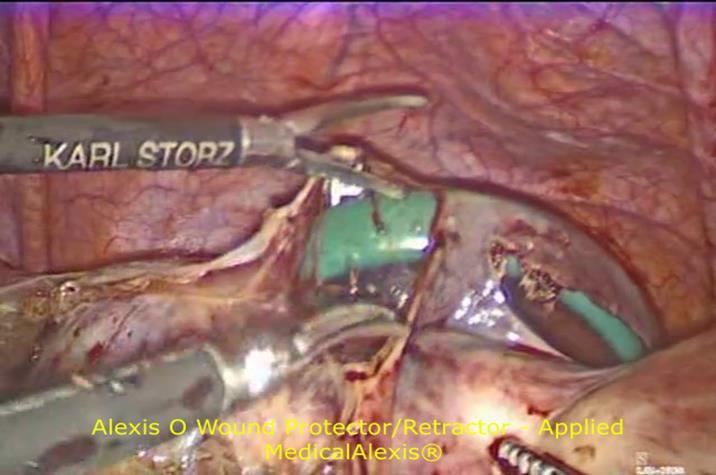 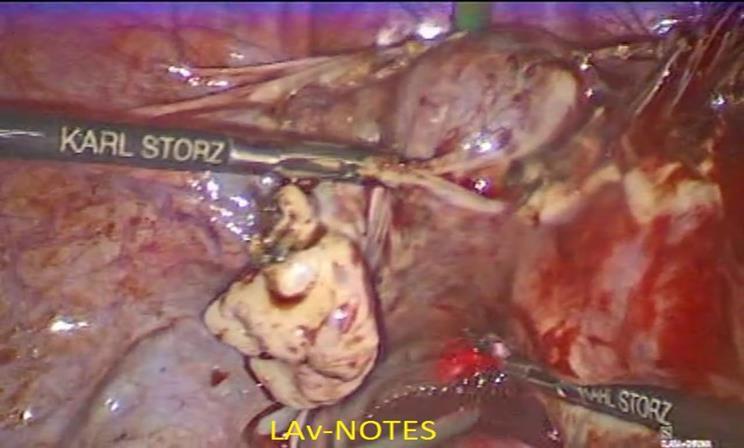 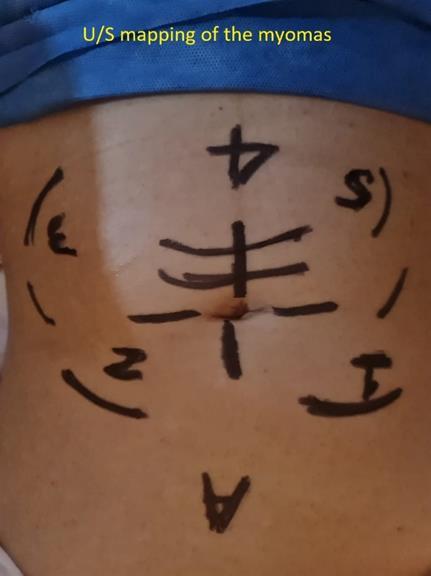 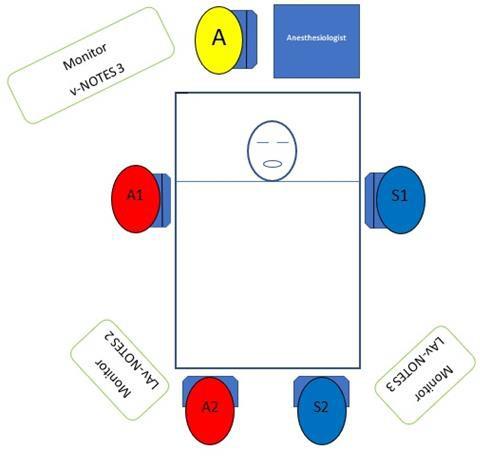 This diagram shows the surgical team positions and the monitors. Surgeon 1(S1) is the Gynecology Oncology Surgeon, a specialist in MIGS; (A 1) was his assistant; Surgeon 2 (S2) was a MIGS Gynecologist, and (A 2) was his assistant (the assistants were FMIGS 2nd year).

Hysterectomy is usually performed for the surgical treatment of several benign disorders of the female pelvis. At present, there are four surgical approaches: Vaginal Hysterectomy (VH), abdominal hysterectomy (AH), Laparoscopic hysterectomy (LH), and robot-assisted hysterectomy (RH). In agreement with the literature, AH remains the most frequently elected route for benign indications. Nevertheless, VH is superior to AH, LH, and RH. VH is the safest and least invasive (cosmesis) approach, with the advantage of a faster return to daily activities. Therefore, VH is the first choice when technically possible, as recommended by the International Society for Gynecology Endoscopy (ISGE), The American College of Obstetricians and Gynecologists (ACOG), and the American Association of Gynecologic Laparoscopists (AAGL). Natural orifice transluminal endoscopic surgery (NOTES) is a new development in the field of minimally invasive surgery. The v-NOTES technique seems to be a safe, effective, and less invasive alternative to performing a hysterectomy in very complex cases with a large uterus.

Hysterectomy is usually performed to manage several benign disorders of the female pelvis. At least through 2005, approximately 600,000 procedures were performed in the United States, annually, with more than two-thirds performed through an abdominal incision despite the existence of the less invasive vaginal and laparoscopic approaches, which are associated with reduced morbidity and faster return to normal activities [1,2]. Hysterectomy remains one of the most frequently performed surgeries. At present, there are four surgical approaches: Vaginal Hysterectomy (VH), abdominal hysterectomy (AH), Laparoscopic Hysterectomy (LH), and robot-assisted hysterectomy (RH). In agreement with the literature, AH remains. the most frequently chosen route for benign indications. Nevertheless, VH is superior to AH, LH, and RH. VH is the safest and least invasive approach, with the advantage of a faster return to daily activities. Therefore, VH is the first choice when technically possible, as recommended by the International Society for Gynecology Endoscopy (ISGE), The American College of Obstetricians and Gynecologists (ACOG), and the American Association of Gynecologic Laparoscopists (AAGL). Technical feasibility strongly depends on the surgeons’ experience in VH, unfortunate, VH is less taught to the new gynecologist generations. Certain patient characteristics (Large uterine size, narrow vagina, absence of uterine descent, and history of cesarean sections) are known to limit vaginal accessibility [3].

Natural orifice transluminal endoscopic surgery (NOTES) is a new development in minimally invasive surgery. NOTES uses the natural orifices of the body, such as the umbilicus, mouth, anus, urethra, and vagina. Most NOTES procedures have been performed transvaginal, and Its benefits include cosmesis and reduced pain compared to conventional methods [4]. The NOTES procedures have been applied in the field of general surgery since 2007 and have Primarily used the vagina as the access route, the first hysterectomy using the NOTES procedure was done by Su et al.in 2012 [5,6,7]; Since then, several studies have demonstrated the feasibility and safety of this technique. Minimally invasive surgeries, including NOTES, have become popular, and more surgeons are beginning to use this procedure, which provides safe entry, easy access, and direct visualization of the surgical abdominal field. With the advent of new technology, better cameras, new optic fibers, advanced energy devices, and all the new instrumentation that is coming up daily, gynecological surgeons tend to operate on more complex cases via minimally invasive surgery. This study is based and lined on the SCARE guideline criteria, which consist of a 14-item checklist to improve the quality of surgical case reports [8].

In hybrid NOTES, the surgery is performed through a natural body orifice with an abdominal optic view.
The main objective of our study is to show a new hybrid technique in gynecological surgery that allows us to perform hysterectomy + salpingectomy with ovarian preservation in a very complicated case with a very large uterus (34/week gestation line).
This hybrid new technique is named Laparoscopic Assisted vaginal Natural Orifice Transluminal Endoscopic Surgery (LAv-NOTES).

Presentation of a case:
A 42-year-old woman with gravida 0, with no desire to procreate, was referred to our institution, with a history of crampy abdominal pain that was getting worse over time and heavy vaginal bleedings. She was seen in another medical center with hemoglobin levels as low as seven g/dl. she received a blood transfusion of 2 units of red cell concentrates (RCC). The hemoglobin level on the pre-op test was 12.3g/dl, 9.1 g/dl twelve hours after the procedure, and three weeks after the surgery the hemoglobin level was 12.1 g/dl. It is believed she was hemodiluted by intravenous fluids during the surgery. Otherwise, the medical history is unremarkable.
A large mass was evident on the abdomen, getting into the 34/weeks of gestation clinically.

The Body Mass Index is (BMI) 19.05 kg/m2 decimal precision two within the average weight.
The clinical picture was discussed with the patient, and the decision was to have a Total hysterectomy + bilateral salpingectomy with ovarian preservation.The patient was informed of Hybrid v-NOTES, andsigned the consent. The LAv-NOTES technique wasplanned due to the expected complexity of theprocedure. The day before surgery, a myoma mapping was done with U/S [Supp. Fig 10].

There was two surgical teams a gynecology oncologist MIGS (minimally invasive gynecological surgeon) specialist; described as surgeon one and his assistant, fellow (FMIGS 2nd year) MIGS with one assistant (FMIGD 2nd year), one anesthesiologist, and one surgical Nurse [Supp. Fig 12]. During the intervention, the first step was the abdominal approach here the operation field was prepared and draped. The Verres needle was placed in Palmer point and the CO2 distention was initiated [Supp. Fig 2], then the first port was inserted 20 cm above the umbilicus [Supp. Fig 3], we used a telescope of 11mm with a 0° fore oblique lens, and four 5mm accessory ports were used on each side of the abdomen, with as energy source the LigaSure™ Retractable L-Hook laparoscopic sealer/divider (Medtronic™, Minneapolis, MN, USA). The bilateral salpingectomy thereafter a myomectomy of the pedunculated myomas was performed [Supp. Fig 4]. During the vaginal time, a Foley catheter was placed, the Gel Port® (Applied Medical™, Rancho Santa Margarita, CA, USA) was inserted, and CO2 was insufflated up to 12 mm Hg to maintain an adequate pneumovagina with the use of a 30°mm scope and Enseal® G2 (Ethicon®Endo-Surgery, Cincinnati, OH, USA). The cervix was pulled with Pozzi forceps and then circumcised with a sharp knife.; previously hydrosulfate with 10cm of lidocaine + epinephrine at the anterior fornix, the vaginal mucosa, and the bladder were pushed up along the uterine-cervical fascia whilst traction on the cervix was maintained.

Once the peritoneum between the bladder and the uterus was identified, it was opened using cold scissors. The same technique was used in the posterior fornix until the peritoneum of the pouch of Douglas was visualized and opened. Once the anterior and posterior peritoneum was opened, both sacro-uterine ligaments were identified, clamped, and cut using cold scissors then ligated with Vycril- 1® (Ethicon®, Piscataway, NJ). The following step was to put the Alexis retractor and the Gel port ® [Supp. Fig 6, Fig 8] (Applied Medical™, Rancho Santa Margarita, CA, USA.) An Alexis O Wound Protector/Retractor (Applied Medical™, Rancho Santa Margarita, CA, USA.) was placed in the pouch of Douglas then, the hysterectomy was performed, caudally to cranially, the remainder of the parametrium, the uterine arteries, and the ovarian ligament were cut and coagulated with advanced Bipolar energy, Enseal® G2 (Ethicon®Endo-Surgery, Cincinnati, OH, USA). [Supp. Fig 5 and 9]. The laparoscopic time was 124 minutes, and for vaginal time, 34 minutes [Supp. Fig 7 and 11], considering that both procedures were done at the same time. After hemostasis, the pneumoperitoneum was deflated, and the port device was removed. The uterus with the myomas was morcellated with a knife and extracted per vagina, and the colpotomy was vaginaly sutured using a Vicryl-1 ® (Ethicon®, Piscataway, NJ) suture. The abdominal 11mm port was closed with 2 Vicryl-2 ®, and all 5 mm ports were closed with Monocryl 4-0 (Ethicon®). The patient’s recovery wasunremarkable, and she was discharged 32 hoursafter the surgery. The total weight of the uterus andmyomas were 2285 grams. The pathology reportcame back as benign myomas.

We report a case of a hysterectomy and salpingectomy with ovarian preservation using LAv-NOTES being successfully performed on a patient with a very large poly-myomatous complicated uterus.

A thorough literature search has suggested that this is the first reported case doing a hysterectomy and salpingectomy with ovarian preservation using LAv-NOTES being successfully performed on a patient with a very large poly-myomatous uterus. The advantages were a double vision in the surgical field, the advantage being that anatomical structures were well visible and perfectly identifiable, minimizing the possibility of complications [Fig 3]. The LAv-NOTES technique is a way to invert the limitations of VH whilst maintaining its benefits, with the additional benefit of laparoscopic surgery. The significant differences between v-NOTES and LAv-NOTES are that in both situations it is possible to perform vaginal hysterectomy with the advantages described above but with LAv-NOTES additional information on the status of the abdominal cavity is provided, in addition to direct visualization of the ureters, the pelvic vessels, and important anatomical structures and complications are prevented in difficult cases. With this new technique, we are proving the facility to perform safe surgery in very complex cases like a large uterine size, stretched vagina, no uterine descent, or recently the number of cesareans sections, adhesions, and multiple surgeries are known to restrain vaginal accessibility.

We believe that young gynecologists or residents will be more confident with this surgical approach to performing hysterectomies. Then, the learning curve will be shorter for hybrid LAv-NOTES because the surgeon can see the anatomy from two points of view, abdominal and vaginal, therefore, LAv-NOTES can extend the scope and capability of conventional v-NOTES. The concept of minimally invasive surgery offers the advantage of minor trauma to the abdominal wall, shorter hospital stays, less pain, and fast recovery can be duplicated in hybrid LAv-NOTES. We believe that this new technique will change the surgical approach for very complex cases with a large uterus, keeping in mind that the cost will be higher, but the recovery, the safety, and the less invasive surgery will compensate.

Katrien Nulens, MD et al. published a Retrospective Cohort Study of 114 Patients on their data. The v- NOTES technique seems to be a safe, effective, and less invasive alternative to performing a hysterectomy in cases with a large uterus. Following the ISGE guidelines (that recommend AH in cases with an expected large uterus >280 g, especially when vaginal accessibility is limited), a laparotomy would have been proposed to most of the women in this study, whereas a v-NOTES hysterectomy was performed without needing conversion in 99% of the patients. [10].

The most performed procedure at present time is the hysterectomy, with the new hybrid surgical technique called, LAv-NOTES we can bring the procedure directly into the field of minimally invasive surgery with the advantages that vaginal hysterectomy offers, but without the disadvantages it, since this technique allows for a direct vision into the abdominal cavity, , and copes with the challenges in complex surgeries such as the very large uterus or poly-myomatous uterus.

More publications about v-NOTES are emerging in the gynecological surgical field, we need more evidence to prove the feasibility of this procedure. In the meantime, we started to apply the LAv-NOTES as the best choice for complex gynecological cases. Comparative studies to evaluate perioperatively outcomes of the patients are needed.