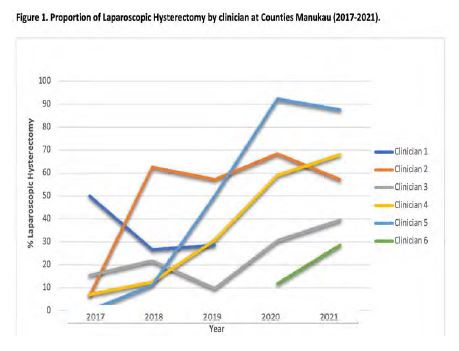 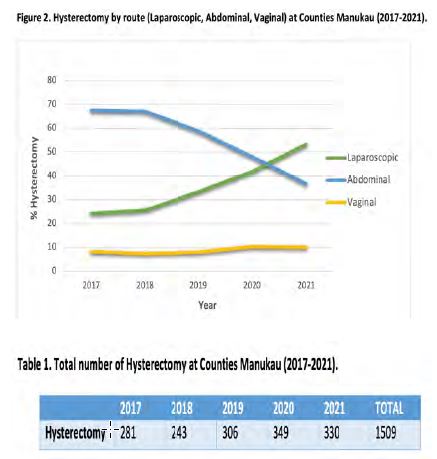 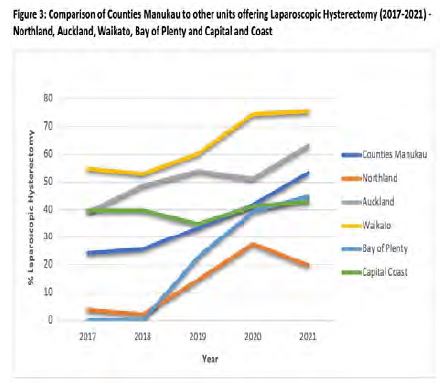 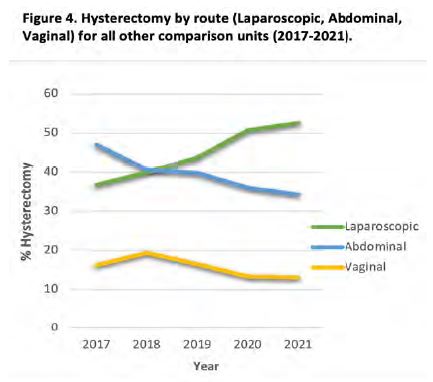 Hysterectomy is the most frequently performed major gynaecological procedure. Traditionally performed as an abdominal or open operation, laparoscopy has demonstrated to be both effective and safe with multiple well-established advantages including decreased rates of surgical complications and improved recovery with reduced postoperative pain and shorter hospital stay. For these reasons, Laparoscopic Hysterectomy (LH) is considered the gold standard surgical option for the treatment of both benign gynecological conditions and early-stage endometrial cancer (1,2).

Over last 5 years, Te Whatu Ora Counties Manukau Gynecology service have offered LH as standard of care. Over this time, we have observed surgical training to be a significant barrier to increasing LH numbers. There are multiple programs throughout Australia and New Zealand available to trainees who are want further training in advanced laparoscopic surgery. However, no current training program exists for Fellows of the Royal Australian and New Zealand College of Obstetrics and Gynecology (RANZCOG) motivated to upskill in LH.

To address this, our service has developed a structured, Consultant focused LH training program (SCLHT) supporting Senior Consultants experienced in traditional abdominal and vaginal approaches but completed training prior to paradigm shift towards minimal access surgery. Our aim is to present and evaluate this project by examining the primary outcome of 50% increase in the proportion of LH performed by clinicians after program completion. With additional secondary objectives to again observe an increase in the proportion of LH at our unit, Counties Manukau, with comparison to other units throughout New Zealand that also offer LH.

Review of the current literature supports the rational for specific LH training programs for Consultant Obstetrics and Gynecology (O&G) Specialists. An article published by Janda et al (2018) (3) surveyed Australia and New Zealand O&G Specialists and found the main barrier to increasing LH rates being a lack available structured training and mentoring opportunities to gain the necessary surgical skills (3). In response, Obermair et al (2019) presented a protocol and surgical outreach training model. This protocol proposes a stepped wedge implementation trial and has yet to be evaluated (4).

International evidence shows that structured education and training programs for O&G specialists are effective in increasing the rate of LH. A Finish study, Makinen et al (2013), demonstrated a reduction in abdominal hysterectomy rates from 58% to 24% and respectively, a significant decrease associated post-operative complication rates (5,6). A Canadian study, Geoffrey et al (2016) after implementing a program for Attending Gynecologist from two hospitals with a preceptorship model of training, demonstrated an increase in LH from 40% to 74% (7).
Following literature review, it is clear this project provides an opportunity to contribute to current literature.

Program description
Our program is based on a surgical preceptor and trainee model and developed based on current Australasian Gynecological Endoscopy and Surgery society (AGES) trainee LH Assessment of Procedural Skills (APS) form (procedure specific) and the International Society of Gynaecologic Endoscopy (ISGE) Accreditation in Endoscopy Guideline (for general laparoscopic procedures considering case complexity) (8,9). Together these guidelines provide a framework supporting a reproducible programme allowing for clear and objective documentation of progress, evaluation, assessment of competency and ultimately credentialing.

Senior Consultants, Fellows of the Royal Australian and New Zealand College of Obstetrics and Gynecology (RANZCOG), experienced in general laparoscopic surgical procedures (RANZCOG laparoscopy level 3) (10), motivated to develop surgical skills required for LH initiate the process by submitting a written request to the Clinical Director. Once accepted, participant requirements include attending an advanced cadaveric laparoscopic training course, reviewing videos of a LH via web-based learning module and regular use of a laparoscopic box trainer to practice laparoscopic specific surgical skills such as suturing and knot tying.
Preceptors are required to be experienced in both abdominal and LH, be committed to provide the necessary support to the trainee, complete the surgical skills assessments after every case and give constructive feedback.

Trainee assessments include a baseline assessment completed by the surgical preceptor, completion of the AGES LH Assessment of Procedural Skills (APS) form (8) after each LH and a 360-degree feedback form (communication, responsibility, and leadership skills). Preceptor and trainee operate together until the trainee can safely perform a LH independently with minimal input for the preceptor (approximately 15 procedures). Both Clinical Director and preceptor, sign off the trainee off marking completion of the SCLHT program and awarding official LH credentialing.

Since start of the project in 2017, with one clinician at any one time, five senior consultants have completed the 6–12-month training and credentialed, with one consultant currently undertaking the program.

We conducted a retrospective descriptive study to evaluate the impact this project has had on the proportion of LH. Data was collected from clinical coding including absolute Hysterectomy numbers and breakdown of route (laparoscopy, Abdominal, Vaginal) for both individual clinicians who have completed the SCLHT programme and Counties Manukau as a collective unit for the last five years (2017-2021). We then invited other units throughout New Zealand to be part of our project and provided their unit’s Hysterectomy data.

Our study’s primary outcome measure is a ‘clinician response rate’ defined as the proportion of clinicians after with a relative increase in LH greater than 50% after SCLHT programme completion and preformed a Wilson analysis. With additional secondary objectives to again observe an increase in the proportion of LH at Counties Manukau, with comparison to other units throughout New Zealand also offer LH.
No Health and Disability Ethics Committee approval was required for this study.

Primary outcome
The study’s primary outcome measure is a ‘clinician response rate’ defined as the proportion of clinicians after with a relative increase in Laparoscopic Hysterectomy greater than 50% after SCLHT programme completion. Analysis of the data indicates a clinician response rate of 100% (Wilson 95%CI 37.6%; 96.4%). All four clinicians (clinician two to five) included in the statistical analysis demonstrated significant increase in their proportion of Laparoscopic Hysterectomy/Total Hysterectomy (Figure 1). It is important to note, clinician one and six were not included in the statistical analysis and clinician one, the first to complete the course no longer works with our service and provides an explanation to why this individual has not performed any procedures after 2019. Clinician six is currently undertaking the SCLHT programme and started in 2020.

Secondary objectives
The study’s secondary objectives were to first demonstrate how the SCLHT programme has influenced LH rates by observing an increase in the proportion of Laparoscopic Hysterectomy/Total Hysterectomy at Counties Manukau 2017-2021 (Figure 2). As shown LH has dramatically increased over the last five years from 24.2% to 53.3%, a 120.2% percentage increase and is inversely proportional to Abdominal Hysterectomy rates. Interestingly, vaginal hysterectomy numbers have remained stable and clearly not compromised by an increase in laparoscopic procedures. A possible reason for this finding is the majority of Vaginal Hysterectomies are now performed in the context of pelvic organ prolapse by a small number (only three at Counties Manukau) of Consultants with a Urogynaecology special interest.

Table 1. Indicates that the rate of Total Hysterectomy performed at Counties Manukau are steadily increasing. It is important to note the COVID-9 pandemic has significantly affected elective operations and provides a justification to why there was a small reduction rather than an increase in the number of Hysterectomies performed 2020-2021. But surprisingly did not affect the proportion of LH preformed over this period.

Our project supports the rationale for a LH training programs for Consultant O&G Specialists. Analysis of the data indications that this SCLHT program is effective in increasing proportion of LH not only for clinicians individually, with all participating clinicians achieving a >50% increase in the proportion of LH, but also as a collective unit, when compared to other units throughout New Zealand.

Counties Manukau LH rates have dramatically increase from 24.2% to 53.3%, a 120.2% percentage increase since implementation of the SCLHT program.
The Counties Manukau Gynaecology unit serves a population with disproportionally high rates of obesity and obesity related endometrial cancer predominantly among Maaori and Pacifika communities. Women with higher BMI stand to gain the greatest differential benefit from a laparoscopic procedure given the alternative laparotomy is associated with higher rates of wound complications (infection and dehiscence) and sepsis particularly in the context of obesity. A service flexible enough to evolve and meet the needs of the community it serves is a fundamental value held by our Women’s health service and is the driving force behind the development of the SCLHT programme.
In addition to complexity associated with obesity, the population we serve have high rates of pelvic infection at its complications particularly tubo-ovarian abscess (TOA), endometriosis, multifibroid uterus and previous abdominal surgery (including caesarean sections) acting as potential confounding factors. Despite this, the service has steadily increased the proportion of LH and we believe this is reflective of a high level of surgical skills, training, and experience within the unit.

Inherent to improving patient outcomes, comes a commitment by all medical professionals to lifelong learning and professional development. Despite this, the preceptor/trainee relationship sometimes presented a challenge as consultant and trainee, are colleagues and often more senior in terms of experience than their preceptor counterparts. This model of training required a different approach to the traditional consultant/trainee – registrar relationship and called for a level of diplomacy.
It is important to mention, the COVID-9 pandemic has significantly affected the delivery of elective health care services. Particularly so at Counties Manukau, South East Auckland was the hardest hit region with the highest admission rates and COVID-19 related deaths in New Zealand. Due the disruption to elective operations, you would assume negatively affected Hysterectomy numbers but surprising this fact did not influence the proportion of Laparoscopic Hysterectomy performed over this period (2020-2021).

We believe the strengths of this study are that the SCLHT program provides a surgical preceptor and trainee model that is well described, effective, reproducible, scalable also transferable to other units and to other surgical procedures. Our project is limited by the retrospective study design and practicalities associated with only one unit with low absolute numbers and small sample size.

Our structured, Consultant focused LH training programme provides a surgical preceptor and trainee model that is well described, effective, reproducible, scalable also transferable to other units and to other surgical procedures. It has also proven to be effective by significantly increasing the proportion of LH for both individual clinicians and as a collective service.

Acknowledgments
Thanks to Dr Simon Edmonds who was instrumental in initiating the programme, Dr Ernest Mavuso, programme co-director and Koenraad D’Hollander who provided statistics support.