Under the impulse of NESA’s (New European Surgical Academy) president Michael Stark a data base has been developed. Bruno van Herendael took care of the endoscopic part of this database in collaboration with the Technical Institute of the University of Moscow (MIPT Moscow Institute of Physics and Technology) represented by Professor Ospan Mynbaev.

The aim is to make endoscopy safe for the patients by registering the peroperative methods of entering the abdomen, the operation performed and the eventual problems during surgery. A postoperative part registers the day od discharge and eventual problems.

The same data are collected for Caesarean Section and Vaginal Hysterectomy.

The aim is to implement this database for the whole of the African continent and this would be a world first. This is why NESA and ISGE do partner with SAGO ( Société AZfricaine de gynécologie et Obstétrie) Michael Stark and Bruno van Herendael did meet in a follow up meeting with the representatives of the Sheikh Anta Diop University in Dakar where the data are put into the computer database under the supervision of Professor Philippe Moreira. The department is headed by Professor Jean Charles Moreau and the endoscopic part is under supervision of Professor Alessane Diouf. For the SAGO were present its president Professor Namory Këita and Professor Biami Dao its technical director for Western Africa. For FIGO Africa its president René Xavier Perrin was active in the debates.

ISGE is actively involved in the endoscopic part and will support the scientific work originating from this database. There is a need for these result on the long term as was highlighted by the Secretary General of the Ministry of Health in Cameroon, Alim Hayatou. He did suggest to involve also the patients to has a solid base to introduce endoscopic surgery as the golden standard and eventually the standard of care in gynecological surgery. 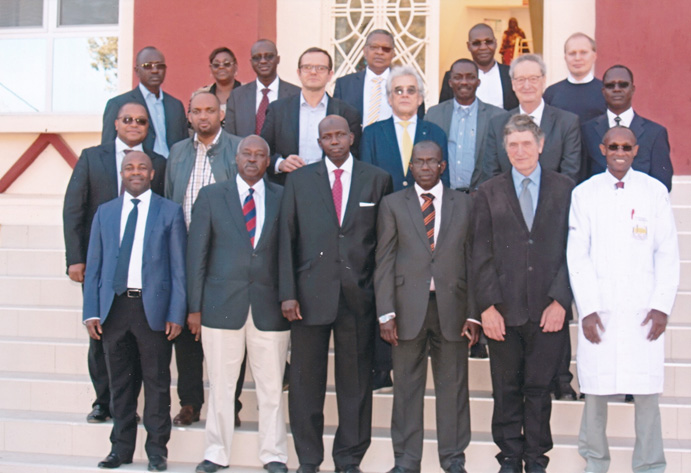