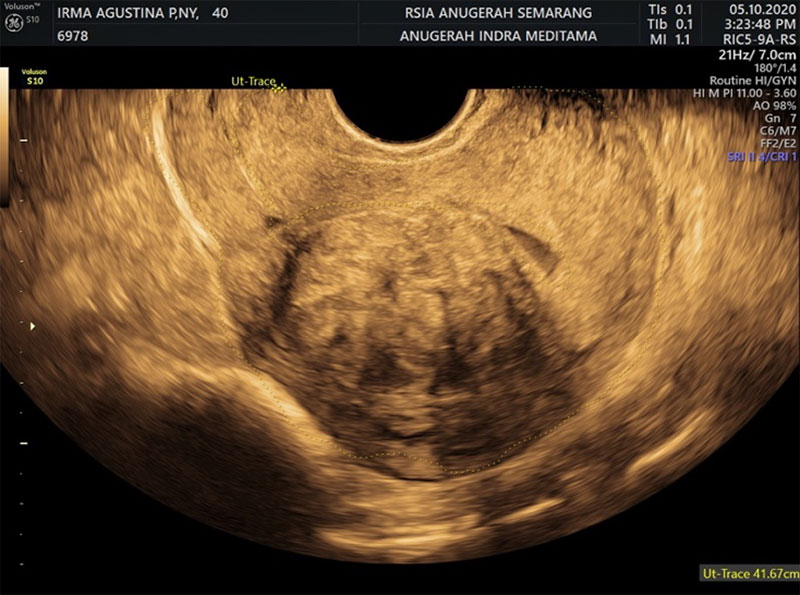 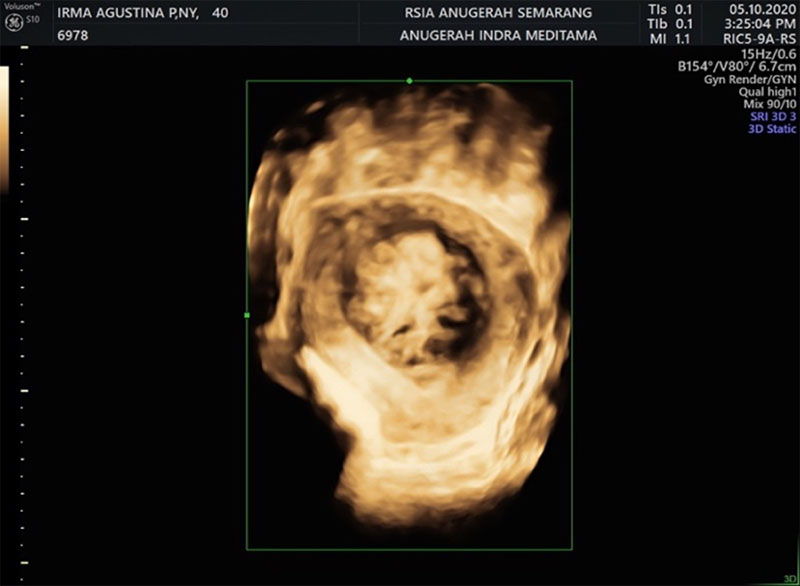 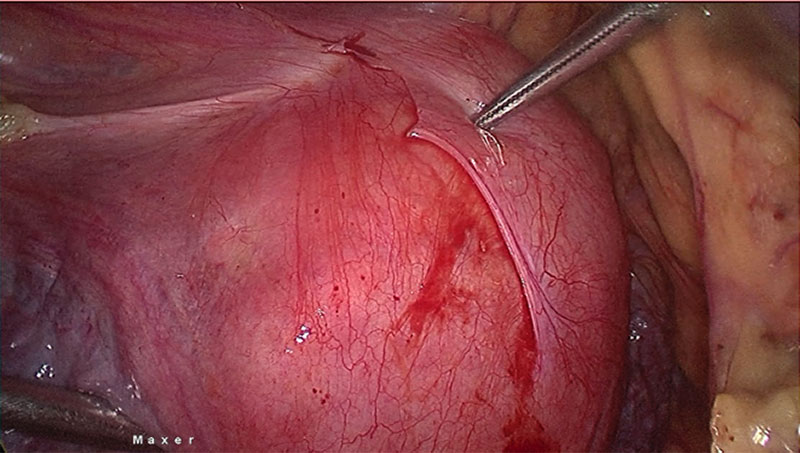 Fig 4. A Single mass fibroid sitting deep down the middle of 2/3 uterus 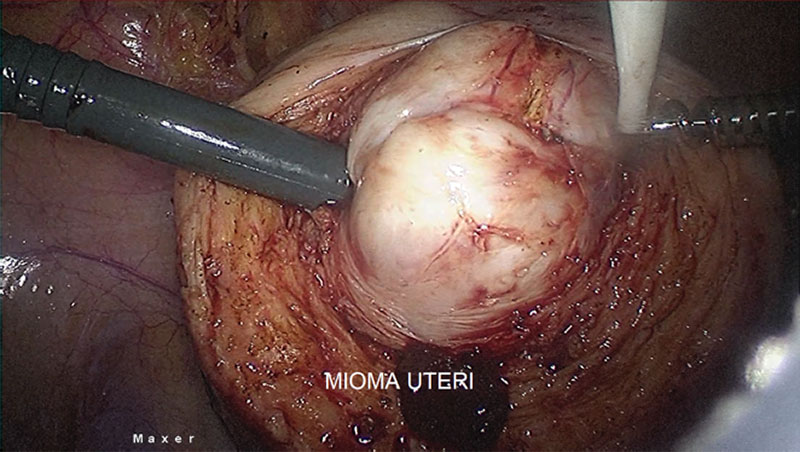 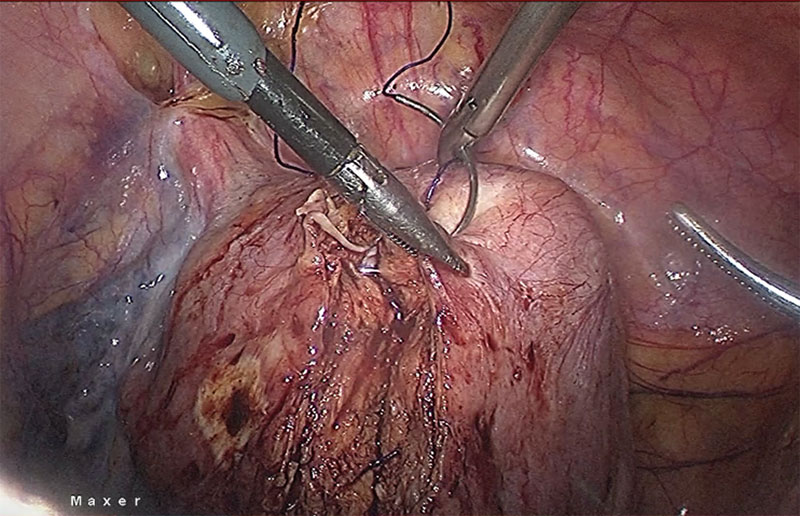 Background: The most frequent benign tumours in females are fibroids which are muscular and classically seen throughout the middle and later fertile years of reproductive cycle. These tumours usually arise from the smooth muscle layer of the uterus. The surgical option for submucous uterine fibroid is either myomectomy or hysterectomy, but nowadays when women have the freedom to choose, we can offer the best for them.

Cases Presentation: Submucous uterine fibroids tumours are the fibroids situated on inner side of the uterus under the inner lining of the uterine cavity. This type of fibroid usually appears as a single fibroid. Transvaginal Saline infusion sonohysterography finding showed massive soft tissue mass with diameter 6,2 cm II Submucous fibroid >50% uterine wall invasion originating from uterine cavity type. This article demonstrates a case of a 42 year-old premenopausal lady diagnosed heavy bleeding with painful mass in lower abdomen with pain, gradually increasing abdominal size with speedy growth in the past 6 months connected with difficulty of breathing and significant anaemia. The Lasmar’s pre-surgical score is 8, so an alternative approach non hysteroscopy technique,the laparoscopy myomectomy is considered.

Uterine fibroids or Leiomyoma also known as fibroid tumours are a major cause of morbidity in women of a reproductive age [and sometimes even after menopause] which usually arise in the uterus [1].

Even though they are structurally made of the smooth muscle fibbers which the structural fibbers of the uterine wall; however, fibroids fibbers are usually considerable thicker than normal myometrium of uterine wall. These benign tumours are usually round shaped. These fibroids frequently are usually restricted to the outer layer of the uterus. Some tumours known as submucosal fibroids tumours are situated on inner side of the uterus under the inner lining of the uterine cavity. [2]. Clinical studies have confirmed that myoma of uterus can cause infertility and anaemia, and even threaten the life in severe cases.

The results of a survey for patients with submucous myoma of the uterus showed that the disease can have a greater impact on the fertility and menstrual status of patients, and cause infertility, haemorrhagic anaemia and other symptoms. [3].They are found in nearly half of women aged over forty; the incidence increases during the reproductive age and decreases after menopause. The most likely presentation of fibroids is by their effect on the woman’s menstrual cycle or pelvic pressure symptoms[4]. The submucous uterine fibroids that carry no symptoms are sometimes not given any treatment until and unless no critical emergency situation arises.

However, large submucous uterine fibroids often create surgical difficulties as it grows as a huge fibroid mass [5]. The surgical option for submucous uterine fibroid is either myomectomy or hysterectomy, but nowadays when women have the freedom to choose the right choice the procedure we can offer them the best treatment. [6]. A well-managed and interesting case of a fibroid uterus is presented here.

A 42 year-old woman with 3 previous Caesarean Section, presented in a Anugerah Women & Children Emergency Ward with heavy bleeding and painful lower abdomen. She was presented with clinical history of serial blood transfusion and very low count of Fe Serum level. Regarding the menstrual history, menarche was at 13 years old and she noticed menorrhagia since 6 months ago with regular blood transfusion.

On physical examination, she was severely anaemic and had a grossly visible large mobile uterus size. On pelvic examination, she had a posteriorly displaced cervix with no lesions or inflammation. Her shortness of breath was likely due to the elevated diaphragm and severe anaemia. Her haemoglobin level was 6.2 gm/ dl. Transvaginal ultra-sonographic in saline finding (Fig 1) showed massive soft tissue mass with diameter 6,2 cm originating from uterine cavity as type II submucous fibroid (FIGO Classification). With 3 Dimension Ultra-sonographic in saline showed that type II Submucous fibroid >50% uterine wall invasion (Fig 2).

According to these Transvaginal Ultrasound we did a scoring system with Pre-Surgical score of Lasmar. From the Lasmar’s Pre Surgical Score, we found that the size of fibroid is > than 5 cm, sitting on the medium of the uterus extending more than 2/3 of uterus and penetrated > 50% of the myometrium. We found that the pre surgical point is 8 [consider an alternative approach to hysteroscopy technique] with adhesion area in different regions due to the previous 3x caesarean section (Fig. 3). During consultation with her and her husband, myomectomy is the recommended treatment of uterine fibroids in women aged 40 years and above with infertility and who wish to become pregnant.

If there is no need for further fertility preservation, hysterectomy should be offered, but she still insist for preserving the uterus because their wishes and faith. Then we plan myomectomy procedure for her. After correcting anaemia with 3 pints bags of packed cell 1 day before surgery, a laparoscopy myomectomy was done with HD 3 chip Laparoscopy integrated System (MAXER™). Uterus was hugely enlarged tightly occupying whole abdomen. Uterus was adherent posteriorly to the sacrum, occupying whole of the pelvis with restricted mobility. Midline uterus incision was given. Fallopian tubes and ovaries could not be reached. A single mass of fibroid tumour was removed from uterus. (Fig. 4). Although bleeding was average, one pint of blood transfusion was given during operation.

Histopathology showed leiomyoma (Fig 5). After securing the bleeding from tumour bed, we did a reconstruction of the uterus with 1.0 Knotless Tissue Control Suture ( STRATAFIX™) (Fig 6). We morcellated the fibroid with Cordless Laparoscopic Morcellator (LiNA Xcise™) from the centre camera port.

Myomectomy has become a commonly performed surgical procedure in recent years as more women desire conservation of their uterus in the presence of symptomatic uterine fibroids [7]. The results of a survey for patients with submucous myoma of the uterus showed that the disease can have a greater impact on the fertility and menstrual status of patients, and cause infertility, haemorrhagic anaemia and other symptoms [8]. These fibroids most often result in irregular menstrual cycles, pain in pelvic region, and exerts pressure symptoms on adjacent tissues and organs [9].

Although the incidence rate of submucous myoma of the uterus is only 5–10%, it can cause more serious clinical symptoms, mainly including excessive menstruation, prolonged menstrual period, shortened menstrual cycle and dysmenorrhea, which can also lead to secondary anaemia and infertility. They may be fatal in some cases when pressure effects involve the urinary bladder, ureters and other neighbouring organs [10].

Management of a patient with uterine fibroids is highly dependent on the presentation and patient wishes. In many cases, the management of the fibroids carries surgical risks, and in some women, the fibroids with symptom on Premenopausal age are best left alone. Women without symptoms who have small fibroids but are close to menopause or who are trying to conceive should be offered conservative treatment with analgesics and haematinics. Saline infusion sonohysterography based imaging is usually used as a supplementary or adjunct imaging modality for characterization of focal uterine masses diagnosed on B-mode ultrasound images.

During transvaginal ultrasound, a uterine mass may appear as an area of increased echogenicity bulging into the endometrial cavity with echogenicity similar to that of the myometrium [11]. Saline infusion sonohysterography is also effective in distinguishing diffuse endometrial changes and focal intracavitary protuberances. However, it is limited in its ability to differentiate between endometrial hyperplasia [premalignant polyps] and endometrial carcinoma [12]. The quality of the image obtained is dependent on the amount of deformation induced by the saline injection into the uterine cavity. If the amount of saline injected is too low, the deformation induced is too small to provide images with a reasonable signal-to-noise ratio.

This situation has led to generation of suboptimal strain images in some instances because of the minimal deformation of the tissue. The amount of deformation applied via saline injection is dependent on the ability of the patient to tolerate the discomfort induced due to saline injection into the uterus; in other cases, insufficient deformation is due to the presence of saline from a previous infusion and the inability to withdraw sufficient fluid before starting a new infusion [13]. In this case, the treatment possibility to treat this fibroid from patient who still want to preserved the uterus is Laparoscopy myomectomy procedure [14].

The case presented here indicates that the myoma was deep down uterine wall invasion transmural. After removal of the myoma of uterus, fallopian tubes and ovaries were visualized, both ovaries were normal. After surgery, she had at first no symptoms, so patient herself enjoyed expectant management. Medical management GnRH analogues are commonly used before myomectomy to make surgery easier and safer, but in this emergency case, in which the patient is suffering with pain, heavy bleeding and anaemia (haemoglobin 6.2 gm/dl we procced to do surgery without GnRHa therapy[15]. Even fast developing lumps may not be excised as routinely practiced because the possibility of a malignant leiomyosarcoma is very rare; only 0.23 percent has been reported in one study [16].

The procedure for myomectomy in premenopausal women should be focussed towards improvement in symptomatic relief and quality of life of patient who desire to retain their uterus; proper counselling and probability of myomectomy are suggested in patients carrying symptomatic fibroids as well as in those patients with huge, asymptomatic fibroids [17]. If the GnRH analogues medical treatment continue for long time, it is usually connected with extraordinary cost, weakness of bone due to demineralization, high risk of recurrence and menopausal symptoms [18]. Negligence of women’s reproductive health, perpetuated by law, is part of a larger, systematic discrimination against women.

Laws obstruct women’s access to reproductive health services. Laws protecting of women’s reproductive health are rarely or inadequately implemented [19]. With Pre Surgical Lasmar Score more than 8, a laparoscopy surgical management was needed. An exploratory and adhesiolysis laparoscopy was the only method available due to the size and location of the mass. Laparoscopic myomectomy for large submucous myomas is a technically feasible procedure. It can be performed by experienced surgeons irrespective of the size or depth of the myoma [20]. The risk of massive blood loss specifically due to increased vascularity of the tumours is the major technical hazard of surgical removal of large uterine fibroids [21].

A woman’s experiences after hysterectomy symptom such as severe vaginal dryness and decreased libido are common and important considerations of the menopausal transition; they are the main issued women avoid hysterectomy and choose to preserved their uterus. In order to avert the complications like an incomplete excision, we perform laparoscopic myomectomy for patients with large submucous fibroids more than 5 cm.

The presence of a submucous fibroid larger than 4 cm and with an intramural extension greater than 50%, laparoscopic rather than hysteroscopic myomectomy can be performed for the sake of safety and, if needed, for the concomitant removal of fibroids of a non submucous type. However, this particular approach should be performed only by surgeons skilled in laparoscopic suturing. Recurrency for Submucous fibroid is very low due the decline in ovarian function toward the later part of the reproductive age and the consequent hypoestrogenic state that ensues.