Primary umbilical endometriosis with menstruation from the umbilicus: a case report and review of the literature

Primary umbilical endometriosis with menstruation from the umbilicus: a case report and review of the literature 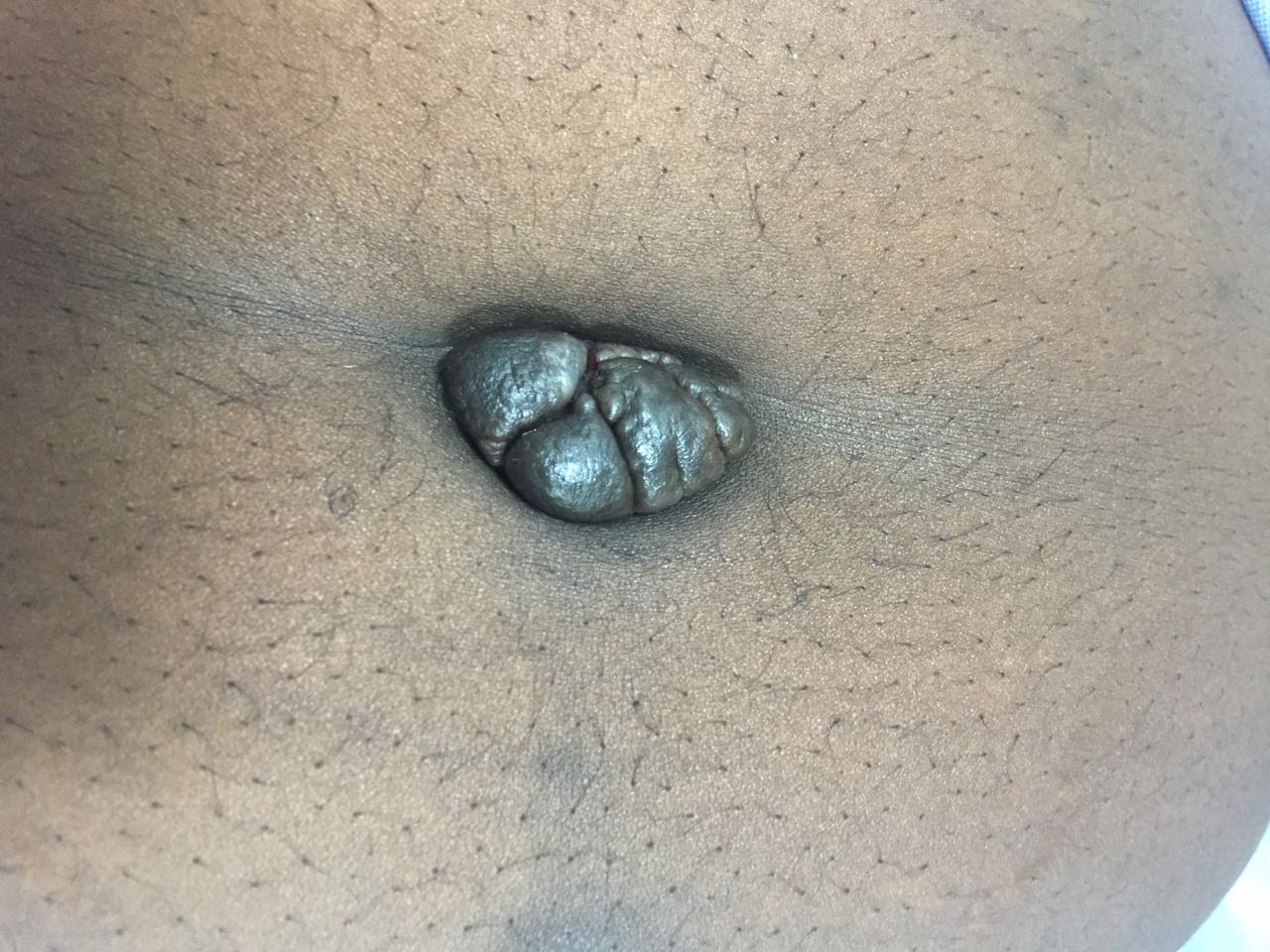 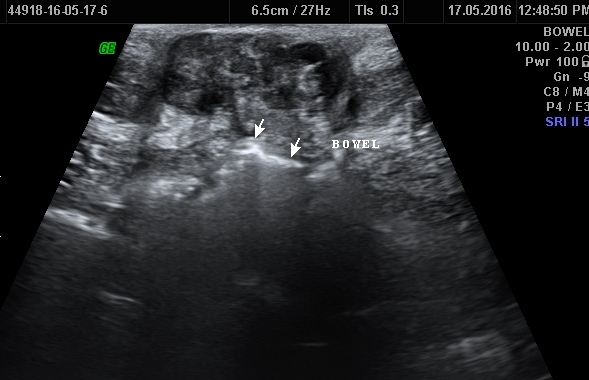 Fig. 2a hypoechoic lesion at the umbilicus 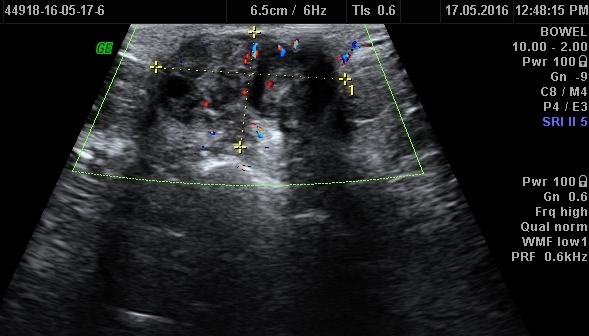 Fig. 2b hypoechoic lesion at the umbilicus 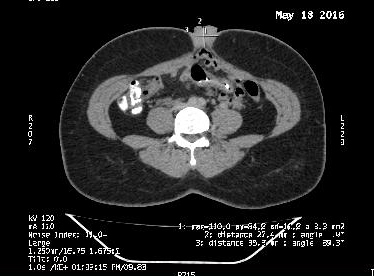 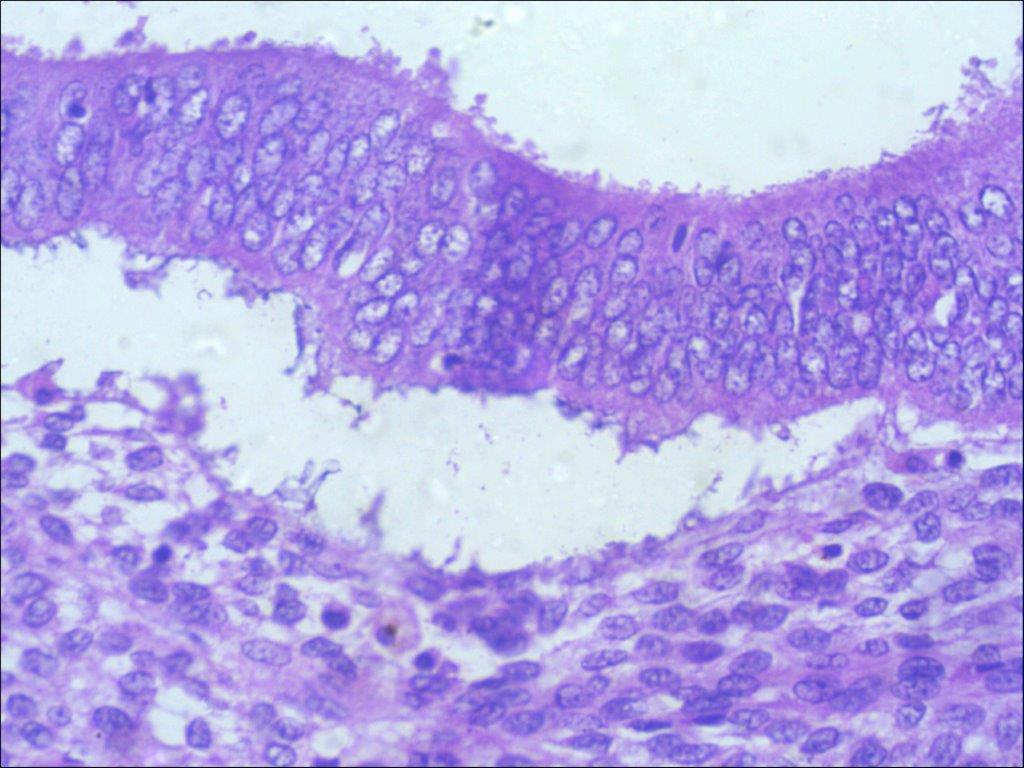 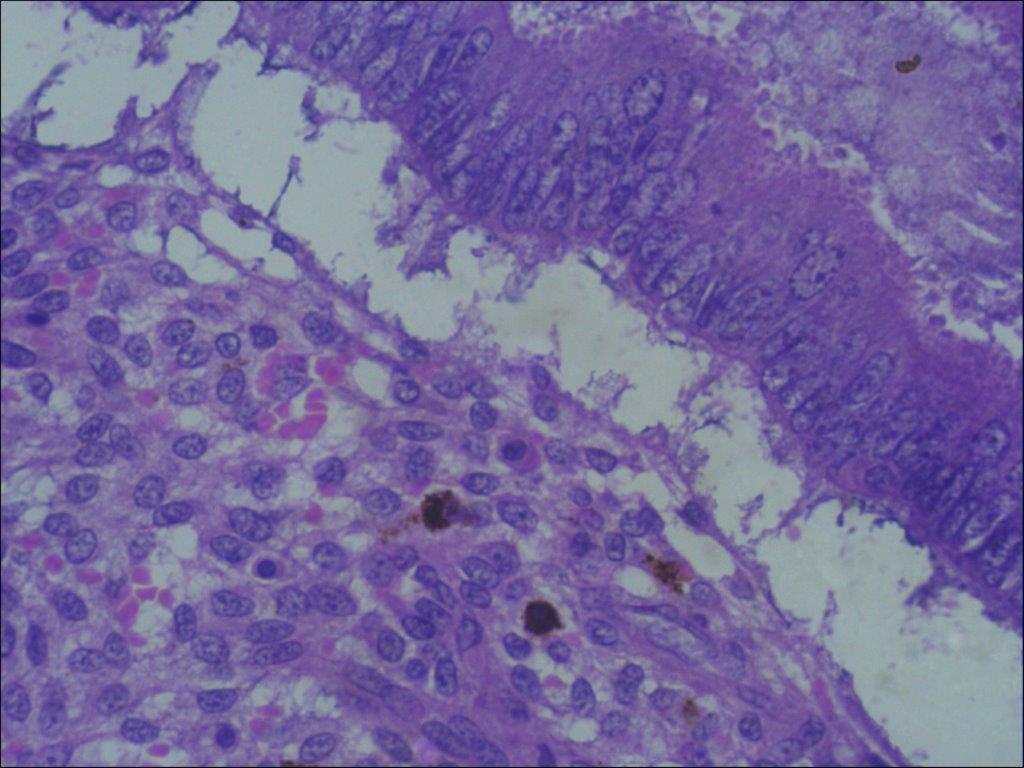 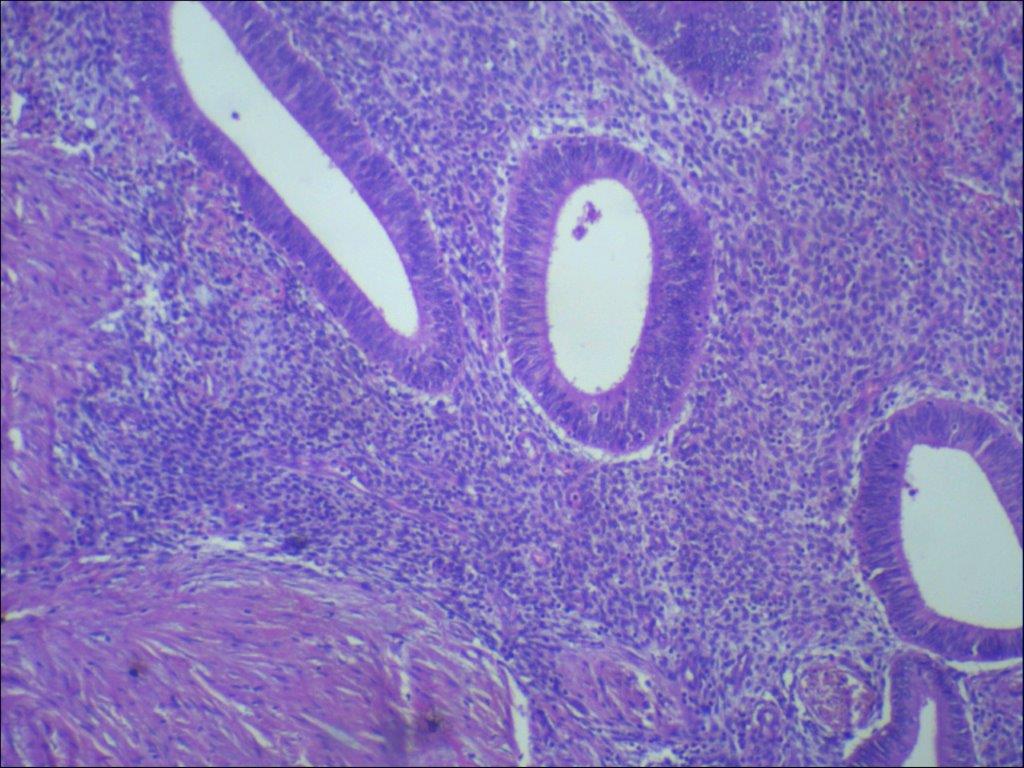 Case presentation: A patient with painful mass in the umbilicus during menstrual period is studied in this paper. A 40-year-old African woman presented with painful umbilical mass that bleeds during periods of menstruation. Clinically her umbilicus had a vivid coloured mass tender on examination. An ultrasound was performed which revealed a 32mm soft tissue echogenic nodule. It was followed by Contrast Enhanced Computed Tomography (CECT) of whole abdomen to make a possible diagnosis of umbilical endometriosis. The possibility of subcutaneous endometriosis should be considered when an umbilical mass is detected despite the absence of previous surgery. The patient underwent a wide local excision of the nodule and surgical exploration revealed a subcutaneous dark coloured lobulated swelling at the umbilicus. Histopathology confirmed the diagnosis of umbilical endometriosis. The patient was asymptomatic at 3 month and 6 month follow-up, but nevertheless warned of the risk of recurrence.

Conclusion: Primary umbilical endometriosis is a rare, benign and under-recognized phenomenon. Pelvic endometriosis is a common condition, but the diagnosis of PUE is difficult. This case highlights the importance of including PUE in the differential diagnosis of women with a painful umbilical nodule. Complete excision with successive histology is recommended for obtaining a definitive diagnosis and optimal treatment.

Endometriosis, a term first used by Sampson, is the presence of endometrial glands and stroma outside the uterine cavity and musculature [1]. It is a benign disorder, which affects 6-10% of all women in the reproductive age group [2]. It commonly occurs in the pelvic organs, especially the ovaries, the uterosacral ligaments and the pouch of Douglas. Endometrial implants maybe categorised as cystic, mixed or solid, with cystic implants being the most common[3]. Women with endometriosis often present with dysmenorrhea, menorrhagia, pelvic pain and infertility.

A 40-year-old healthy African parous woman presented with a painful and vivid coloured nodule in the umbilicus which gradually evolved over the past 8 months. She had cyclical umbilical pain and bleeding from the umbilicus. The bleeding would start two days before her menses and continue for the entire duration of her period. It was accompanied by pain and swelling in the umbilical area. The patient had regular, heavy and painless menstrual periods and did not wish for any treatment for such.

She had two previous spontaneous vaginal deliveries. She was not using any form of hormonal contraception. Her medical history was not significant and she never had any abdominal surgeries. Clinical examination revealed that the patient has a 4×3 cm dark coloured soft-firm nodule involving whole of the umbilicus (Figure 1). It was not reducible by gentle digital pressure. She then underwent an ultrasound scan that showed a 32 mm complex soft tissue echogenic, predominantly hypoechoic lesion at the umbilicus, approximately 5 mm below the skin surface (Figure 2a,b,c). She was then taken for CECT abdomen to look for intraperitoneal communication and other sites of endometriosis (Figure 3). The key clinical feature that led to the correct diagnostic hypothesis of umbilical endometriosis was the temporal association of the bleeding from the umbilical nodule with her menstrual period.

The patient was offered surgical management as she had taken some medical treatment in her home town back in Africa which did not solve her problem and the swelling continued to persist. The risk of recurrence and scar endometriosis were explained to her. The patient successfully underwent excision of the nodule with accompanying umbilical reconstruction. Histology confirmed the diagnosis of endometriosis and revealed the presence of endometriotic glands with mucinous type metaplasia and extravasation of the mucinous secretion into the adjacent stroma (Figure 4a,b,c).

No epithelial atypia was seen and the excision appeared complete. The patient was seen six weeks after the surgery and found to be asymptomatic with a normal umbilicus.

Endometriosis is a benign disorder, which affects 6-10% of all women in the reproductive age group [2]. The umbilicus could be an extra-ordinary site of endometriosis and is affected in 0.5-4% of women with endometriosis [8]. Umbilical endometriosis was first described in 1886 and since then more than 100 cases have been described [6]. Majority of these cases occurred secondary to surgical, commonly laparoscopy, scars.

In English literature, only 37 cases of PUE have been described [8]. An umbilical endometriotic lesion without surgical history is a rare condition [6,7]. Some case reports have also described the presence of umbilical endometriosis during pregnancy [9]. There has been great speculation about the pathogenesis of this phenomenon and several theories have been proposed. Latcher has classified these theories into three main categories: a) the embryonal rest theory, which explains endometriosis adjoining the pelvic viscera by Wolffian or Müllerian remnants [6,7]; b) the coelomic metaplasia theory, which states that the embryonic coelomic mesothelium dedifferentiates into endometrial tissue under stimulus such as inflammation or trauma [10];c) and the migratory pathogenesis theory, which explains the dispersion of endometrial tissue by direct extension, vascular and lymphatic channels, and surgical manipulation. Still others suggest cellular proliferation of endometrial cells from initial extraperitoneal disease along the urachus [11,12]. The real mechanism still remains a mystery. The most widely accepted theory however is that endometriosis results from metastatic implantation from retrograde menstruation [Figure5a,b]- [13Umbilical endometriosis patients are usually in the reproductive age group and present commonly with swelling, pain, discharge or cyclical bleeding from the umbilicus.

There may be associated symptoms of coexistent pelvic endometriosis These lesions are usually bluish-black in colour and become painful, larger and bleed about the time of menses. They range in size from 0.5 cm to 3 cm, but can enlarge to even more enormous sizes [6]. While the diagnosis is primarily clinical, Ultrasonography (USG), Computed Tomography (CT) and magnetic resonance imaging (MRI) can be useful in evaluating patients with suspected endometriosis.

Adnexal/pelvic endometriomas appear as cystic masses with low level internal echoes. However non-adnexal endometriosis has non-specific USG features in the literature; lesions maybe multi-cystic, solid or mixed cystic and solid [20]. The pattern of echogenicity is thought to be related to the amount of distribution of haemorrhage and fibrous tissue components [21]. Most nonadnexal endometriosis shows vascularity at colour Doppler USG as multiple dilated feeding vessels at the periphery of the mass or single vascular pedicle. Often internal vascularity is seen as in our case.

These vessels show low velocity flow.At (CT), anterior abdominal wall endometriosis may be non-specific but it typically appears as a solid tissue mass with mild to moderate enhancement after the administration of intravenous contrast material[3]. On MRI, endometriosis is homogeneously hyperintense on T1-weighted sequences [14].

Histological findings are characterized by irregular glandular lumina embedded in the stroma with a high cellular and vascular component resembling the stroma of functional endometrium. A fairly recent study has suggested a distinctive dermato-scopic feature in cutaneous endometriosis — that of comprising small red globular structures called ‘red atolls’ [15].

Other causes of painful swelling in the umbilicus are shown in Table 1 [8].

Surgical excision is the standard treatment of this condition. By increasing the awareness of PUE as a potential diagnose of painful discoloured umbilical swelling, we hope this condition will be recognised and treated optimally.

CONSENT: Written informed consent was obtained from the patient for publication of this case report and any accompanying images. A copy of the written consent is available for review by the Editor-in-chief of this journal.

COMPETING INTERESTS: The authors declare that they have no competing interests.

ACKNOWLEDGEMENTS: The authors do thank Lilo Mettler, Ibrahim Alkatout and Bruno van Herendael for their valuable suggestions and positive criticism.