Bilateral and Multiple Mature Teratomas of the Ovary; A Case Report and Brief Review of Literature

Bilateral and Multiple Mature Teratomas of the Ovary; A Case Report and Brief Review of Literature 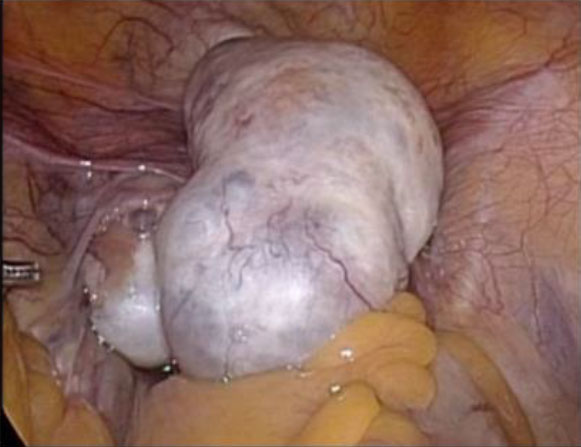 Figure 1. Figure 1 and 2 showing right ovary enlarged mass before and after detorsion. 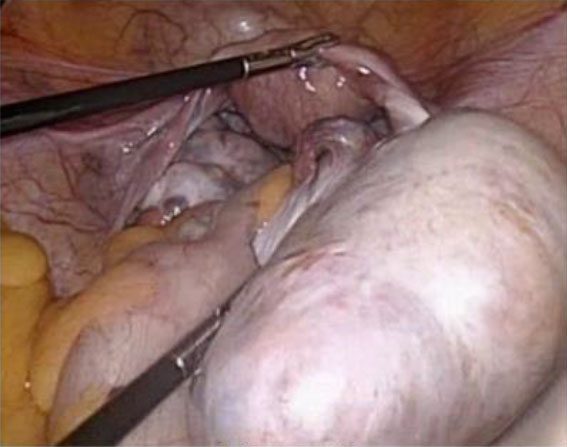 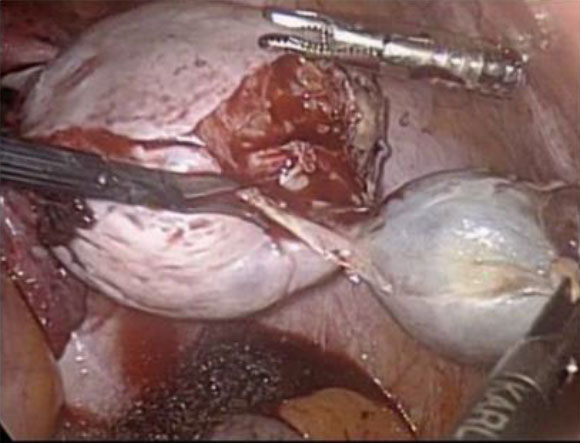 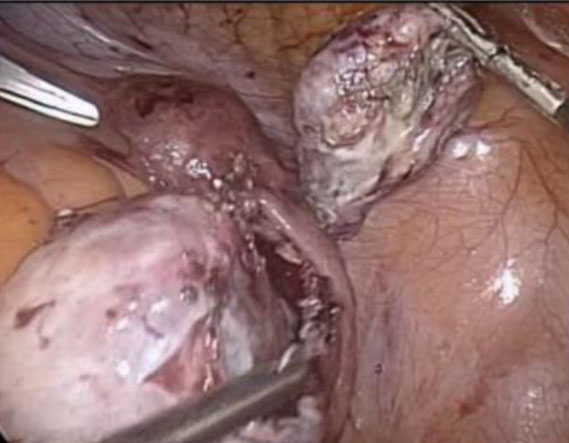 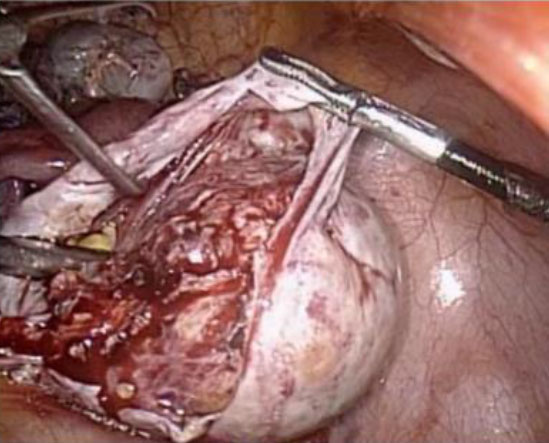 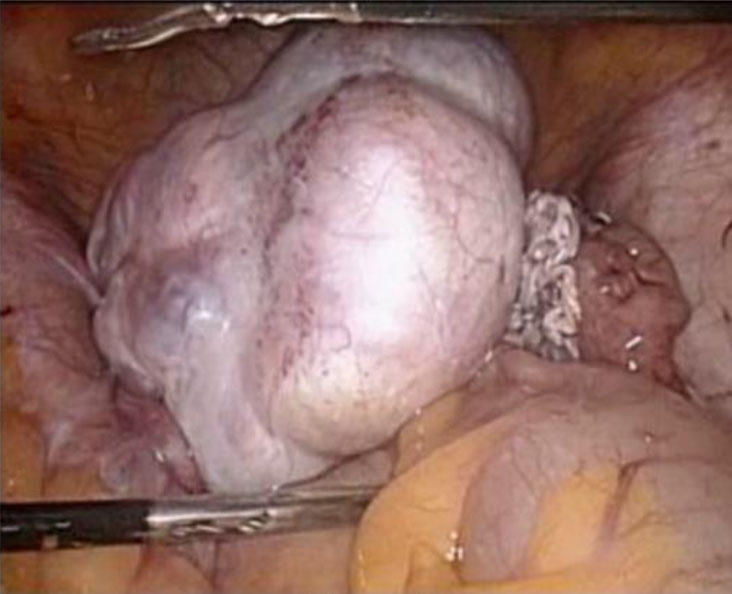 Figure 6. Figure 6 and 7 showing enucleation of the mature cystic teratomas on the left ovary. 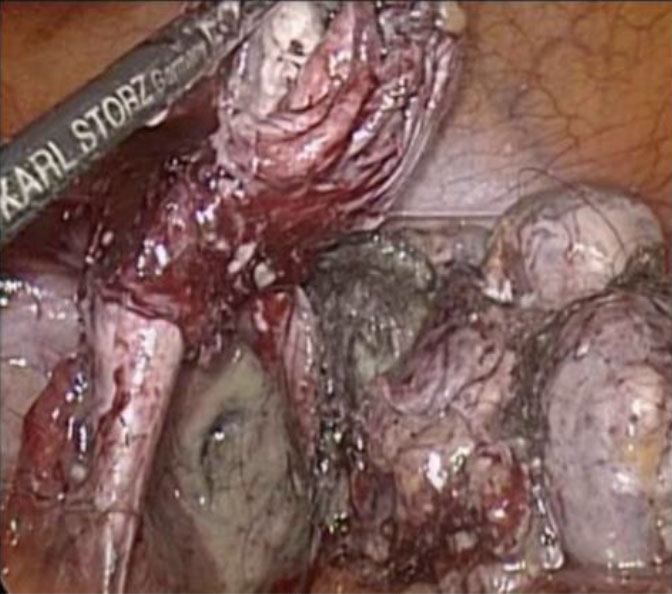 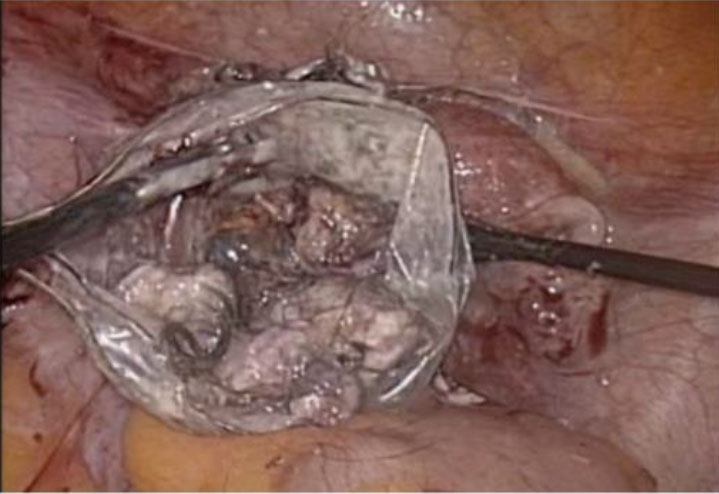 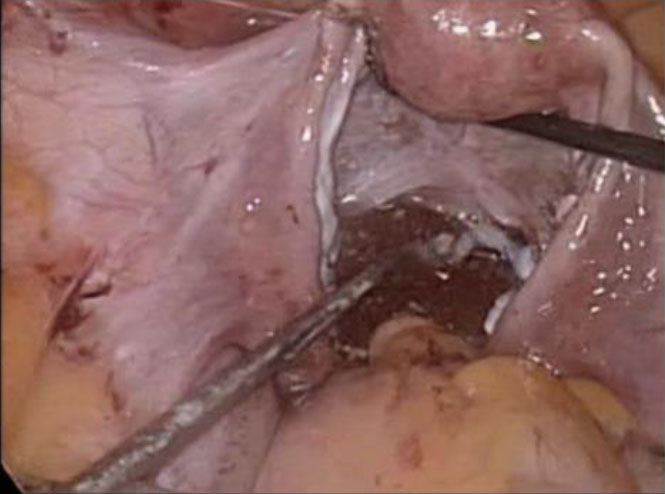 Multiple and bilateral mature teratomas of the ovary are a rare occurrence. Mainstay of treatment remains surgical excision. We report a rare case of a 27-year-old female with a total of 12 ovarian dermoid cysts, 9 on the left and 3 on the right. She underwent laparoscopic bilateral cystectomy. She presented with a 3 weeks history of severe acute onset right iliac fossa abdominal pain. Her abdominal examination was unremarkable. A transvaginal ultrasound done revealed cystic masses on the right ovary measuring 4.71cm in diameter with features suggestive of partial torsion and a multi-cystic left ovary. On laparoscopy a right enlarged ovary was found with partial torsion. Detorsion was done and 3 large dermoid cysts enucleated. The left ovary was enlarged and a total of 9 dermoid cysts which were enucleated. The remaining ovarian tissue was reconstructed. Post-operative period was uneventful. The case demonstrated the rare occurrence of multiple bilateral ovarian cystic teratomas and need for complete enucleation to prevent recurrence. It further showed use of laparoscopic ovarian sparing surgery as a viable option in cases of desired future fertility.

Torsion is the most common serious complication, occurring in 3-16% of cases and a significant cause of mortality 3. Torsion is more common in intermediate size tumors and may lead to venous congestion, formation of adhesions and even parasitic teratomas.

A 27-year-old nulliparous female, presented to us on April 2019 with right iliac fossa pain for 3 weeks. The pain was dull in character, constant, acute in onset, severe and non-radiating with no report of per vaginal bleeding, abnormal vaginal discharge, fever, nausea or vomiting. She reported associated right sided dyspareunia. Her menses were regular, every 28 days lasting for 1 to 3 days with associated dysmenorrhea. She had no prior surgical or medical history and had a smoking history of 2 pack years and occasional alcohol consumption. On examination the abdomen was not distended, non-tender and had no obvious organomegaly. Transvaginal ultrasound done on admission found cystic masses on the right ovary measuring 4.71cm in diameter with features suggestive of partial torsion and a multicystic left ovary. The uterus was anteverted and normal in size. An abdominal-pelvic CT scan done revealed bilateral well circumscribed large ovarian masses consistent with dermoid cysts. Other investigations included Antimullerian hormone level of 0.98ng/ml and Ca-125 at 11.5. A diagnosis of bilateral mature ovarian teratoma with partial torsion was made and laparoscopic cystectomy scheduled.

Patient was put under general anesthesia in semi lithotomy position. On laparoscopy the right ovary was noted to be enlarged and twisted 3 half times around its support structures and lying anterior to the uterus. Detorsion was done successfully and 3 large dermoid cysts enucleated. The left ovary was enlarged occupying the entire pouch of Douglas. A total of 9 dermoid cysts were enucleated from the left ovary and removed in toto. The remaining ovarian tissue was reconstructed bilaterally using vicryl suture. The cysts were then removed via an endobag with careful attention to avoid spillage of cysts content. Extensive peritoneal lavage was done with suction of any debris. Estimated blood loss was less than 100mls. Post-operative period was uneventful. Pathology examination confirmed the diagnosis of bilateral multiple ovarian cystic teratomas. On follow up, over 1 year, our patient has had regular menses and serial ultrasounds have demonstrated normal ovaries bilaterally with no evidence of cysts. Repeat Anti-Mullerian hormone levels 3 months post operatively was reduced at 0.40 ng/ml. She currently does not desire fertility but has been informed of the need for assisted reproductive technology if she does.

Mature cystic teratomas of the ovary are classified as germ cell tumors which are derived from primordial germ cells. Germ cell tumors may be benign or malignant and occur in various sites from gonadal to extragonadal sites. Teratomas contain cells from the various germ layers, histologically referred to as ectoderm, mesoderm and endoderm. Teratomas are further classified as mature or immature depending on the degree of differentiation and components of the tumor. Immature tumors have more malignant potential 6.

Mature ovarian teratomas account for 10-12% of all ovarian neoplasms occurring most commonly between the ages 20 to 30 years. Our patient was a 27-year-old female at presentation. They occur bilaterally and are multiple in 10 to 15% of cases. Immature teratomas occur more rarely accounting for 5% of all ovarian neoplasms 6. In our case we found enlarged ovaries bilaterally. The right ovarian mass measured 4.2cm in diameter.

Imaging remains the mainstay in diagnosis of mature teratomas of the ovary. Mature teratomas are detected as cystic or solid masses with fat or calcific differentiation in 90% and 50% of cases respectively 2. We carried out transvaginal sonography on our patient and found an enlarged cystic mass on the right ovary with features suggestive of partial torsion and an enlarged multifollicular left ovary. Detection of multiple teratomas in one ovary may be more difficult on ultrasonography 4 necessitating use of other modalities such as MRI or CT scan. An abdominal-pelvic CT scan on our patient confirmed a diagnosis of dermoid cysts based on findings of bilateral well circumscribed large ovarian masses. Imaging modalities are however not sufficient to differentiate mature teratomas from immature ones 6.

Our patient underwent a laparoscopic cystectomy as detailed. A conservative approach with ovarian tissue preservation was important in deciding the mode of intervention considering our patients age and low ovarian reserve as evidenced by her Antimullerian hormone level of 0.98ng/ml. Intraoperatively this was ensured by minimizing use of electro surgery and reconstruction of remaining ovarian tissue by endo-suturing. We performed a laparoscopic cystectomy successfully despite the large number of dermoid cysts showing that minimally invasive surgery is a viable option. It has not showed an increase in complications and has additional benefits of less bleeding, shorter hospital stay and quick recovery8. Other complications and risks in laparoscopic ovarian cystectomy such as spillage of cyst contents leading to adhesion formation have been further mitigated by use of an endobag 4 which we used during our operation. We further performed extensive peritoneal lavage and suctioning of any debris and spilled cyst content.

Recurrence of mature teratomas of the ovaries has been reported to be higher in cases with bilateral cysts at a rate of 2.5% following conservative treatment over 8 years of follow up 10.Recurrence, though rare, may be due toincomplete enucleation during surgery andworsened by spillage of cyst contents 2. Thisstresses the need for complete enucleation of allcysts especially in cases of multiple cysts in oneovary. Furthermore, mature teratomas possess a1-3% risk of malignancy most frequentlypresenting as squamous cell carcinomas with apoor prognosis.

Multiple and bilateral ovarian teratomas present a unique challenge in diagnosis and management. Our case, despite the high number of dermoid cysts, demonstrates that use of minimally invasive surgery is a viable approach as well as conservative surgery in order to preserve fertility. Furthermore, complete enucleation during surgery prevents recurrence due to small undiagnosed cysts and eliminates chances of malignant transformation.