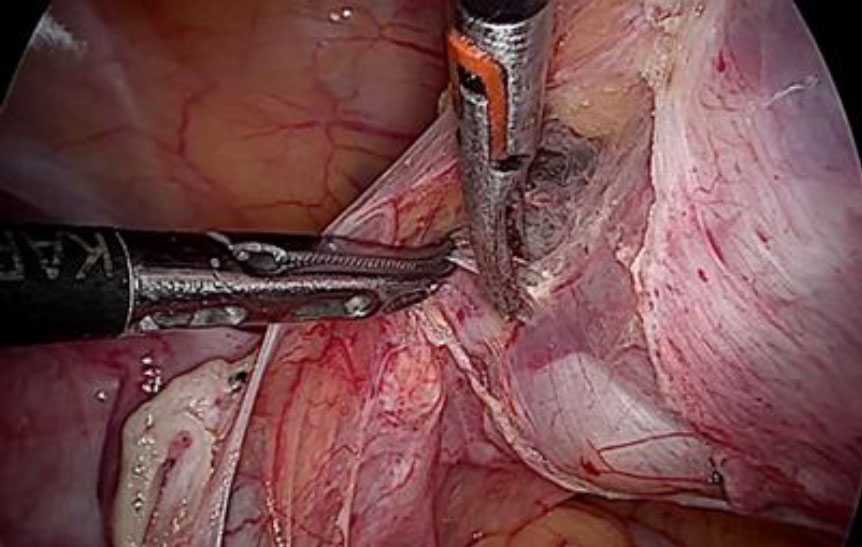 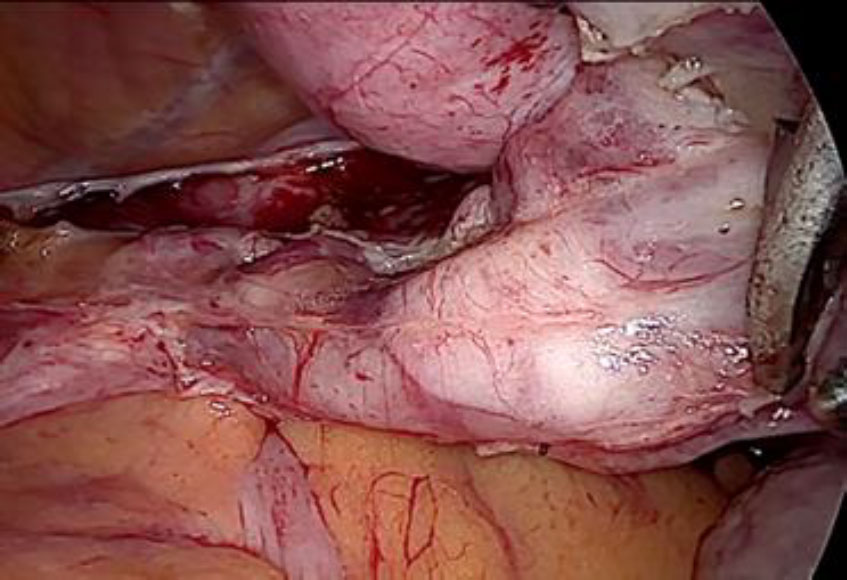 Figure 3: Following the fleshy tumor inside, the entire length of left uterine vein dissected (marked by green arrow at each end). 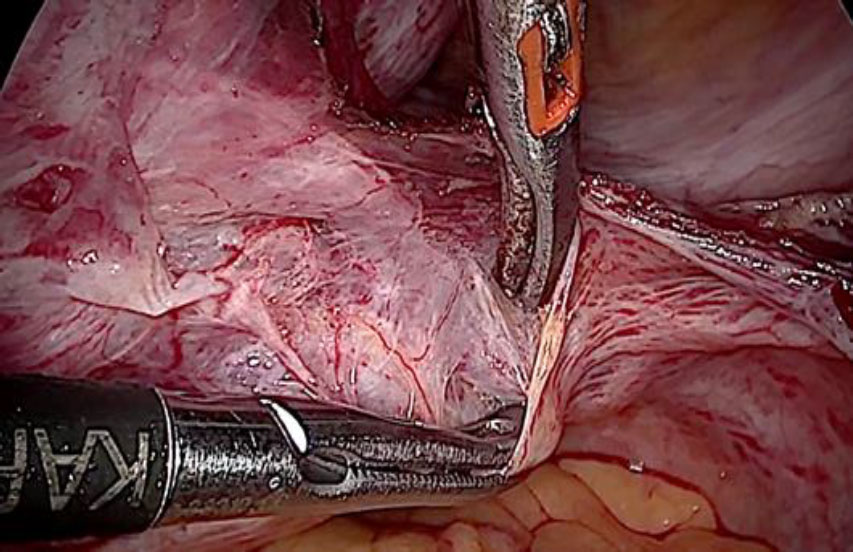 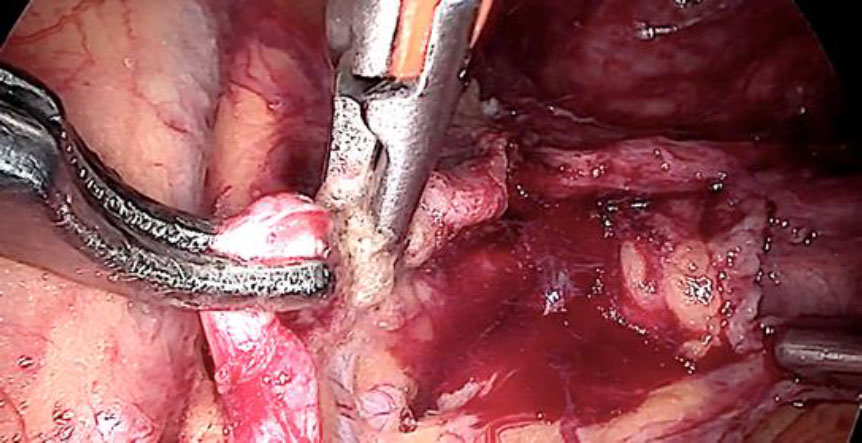 Figure 5: The left uterine artery ligation at origin, after ureterolysis 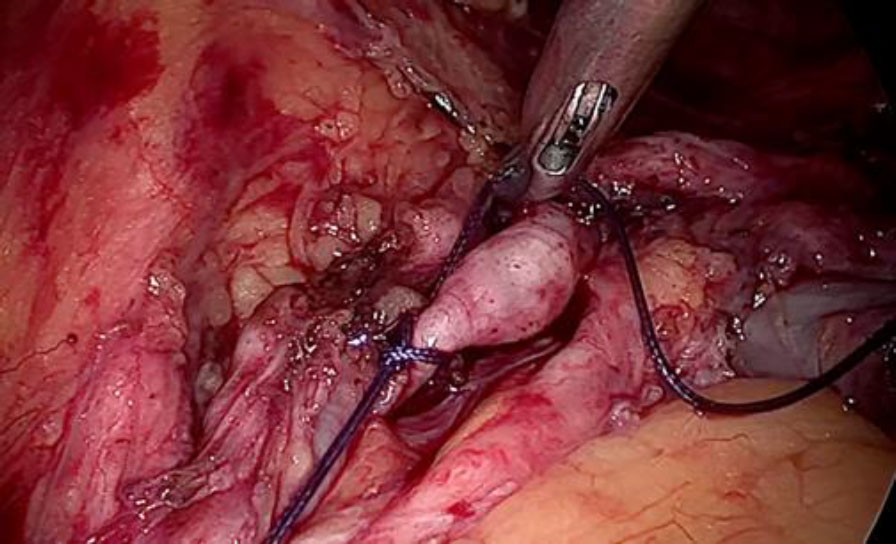 Figure 6: The deep uterine vein being secured with double ligature beyond the tumor limits to prevent complications like bleeding, slipping of the ligature or embolisation. 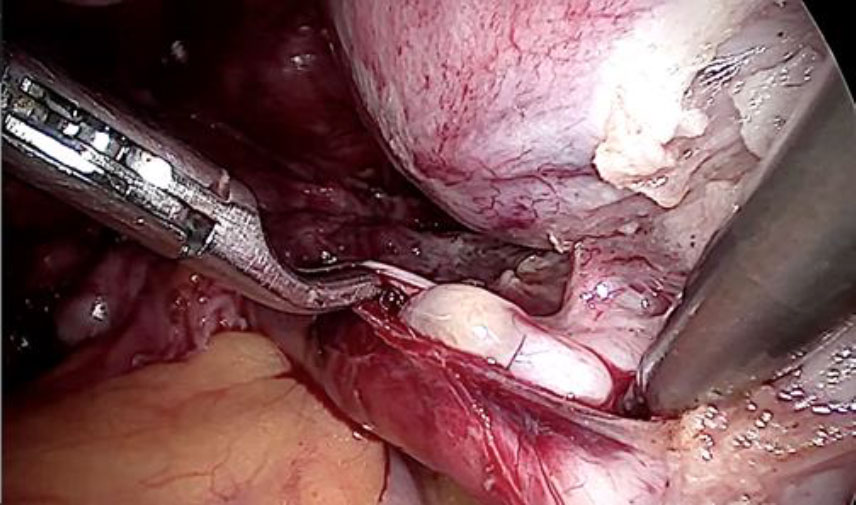 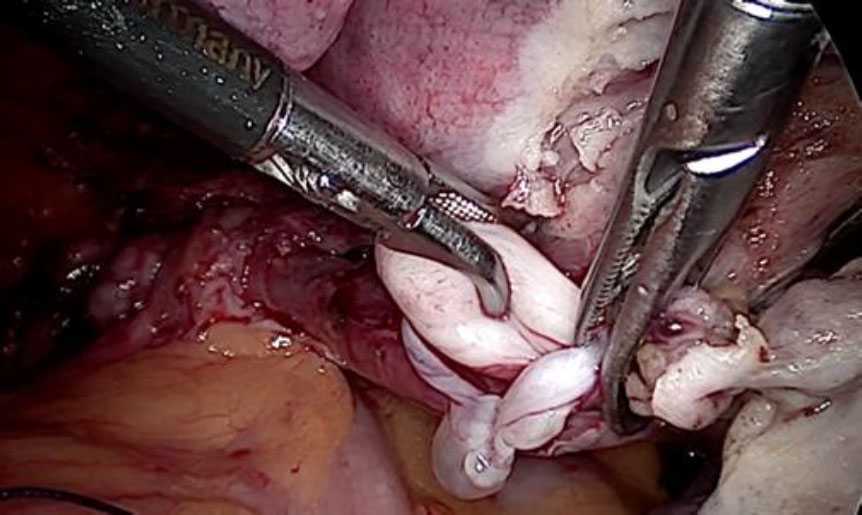 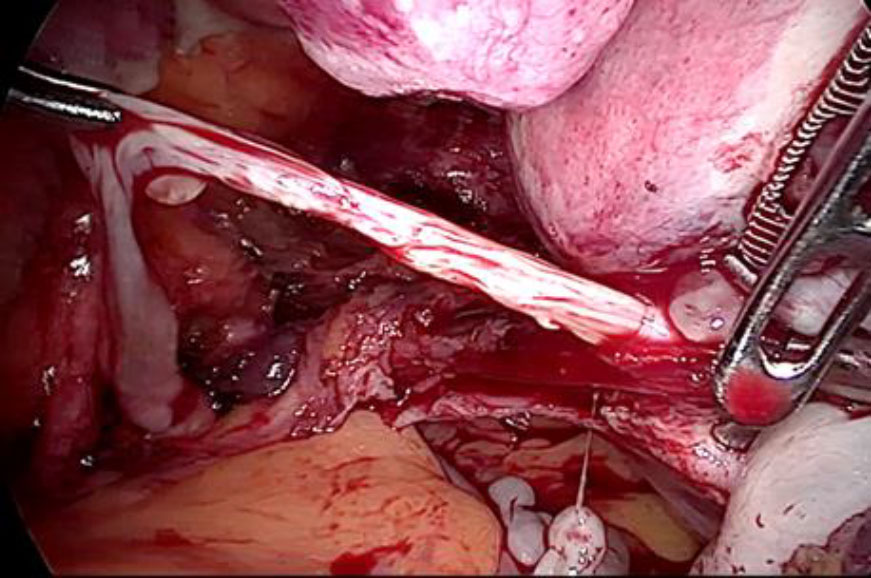 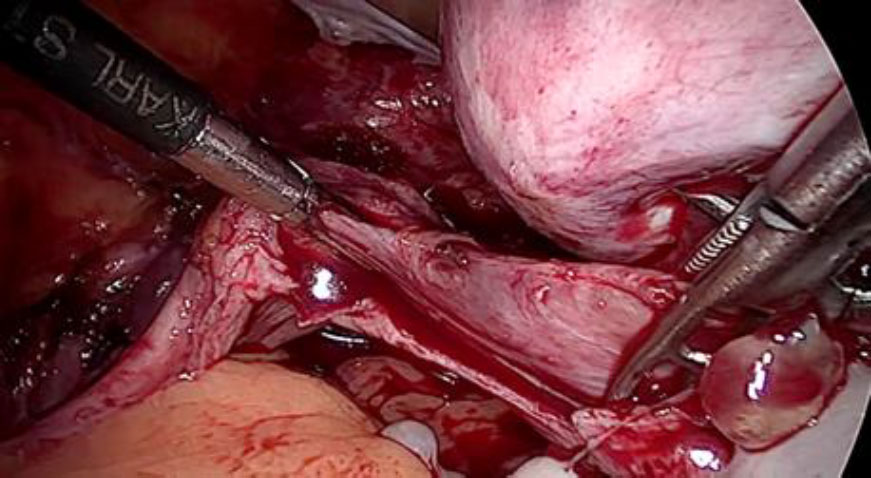 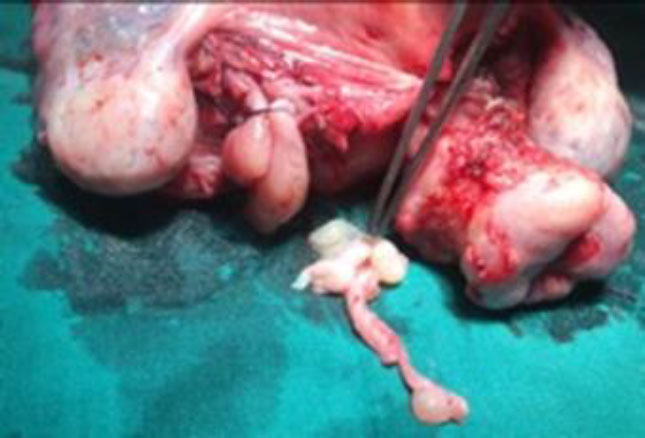 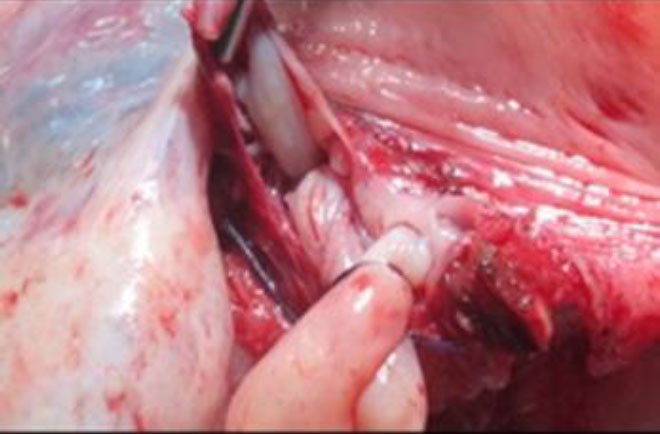 Figure 12 The closer view of the smooth tubular non-luminal tumor attached to the uterus & within the vein lumen.

A 49-year-old woman, P2L2, presented with abnormal uterine bleeding due to uterine leiomyomas. She had no other associated symptoms. During total laparoscopic hysterectomy, the left uterine vein was exceptionally dilated with a fleshy lumpy fluctuating mass within suspected of intravenous leiomyoma (IVL). IVL is extremely rare, with no more than 300 cases reported worldwide. A stepwise surgical management of a case of IVL is presented.
Disclosure statement: The authors declare that they have no conflicts of interest and nothing to disclose.
Funding: None

It is a known fact that benign and malignant uterine smooth muscle tumors occur throughout the female genital tract, from the vulva to the broad ligament including the adnexa.

Benign masses of the myometrium are inconsistently known as fibroids, myomas, leiomyomata, fibromas, or fibromyomas. Globally leiomyomas are detected in nearly 3/4th of all hysterectomy specimens, irrespective of the indications, and the average number of independent tumors per uterus has been estimated to be more than six.[1] As a result, these are the most common tumors. Although only one in four women of reproductive age is symptomatic; it adds a significant onus to healthcare worldwide.

Intravenous Leiomyoma (IVL) is a peculiar condition in which a fibroid growth extends in a tubular pattern involving the venous lumen. Dreadfully, it may extend up to the vena-cava, heart and lungs triggering lethal complications. Fortunately, it is a rare condition with not more than 300 cases reported worldwide.[2] It is difficult to diagnose as these patients are clinically asymptomatic and may only present with symptoms related to leiomyoma or intra-cardiac extension. Primarily they concur with leiomyomas and are coincidentally encountered at the time of surgery for leiomyomas.

Thus, catching the surgeon unaware in a situational stress of unknown extent and likely exertions. Herein, one such case of IVL diagnosed incidentally at the time of total laparoscopic hysterectomy and its stepwise surgical management is presented. 0.

A 49-year-old multiparous (P2L2) female was suffering from abnormal uterine bleeding with dysmenorrhea due to uterine leiomyoma for 6 months. Her bleeding was not controlled with medical therapy. On Clinical examination she had a uterus up to 14 weeks of gestation with irregular contour affirming multiple leiomyomas. Pelvic ultrasound confirmed multiple uterine leiomyomas of variable sizes and locations. She was advocated surgical management, and subsequently, opted for total laparoscopic hysterectomy which was carried out in standardized stepwise manner as follows.

Primary an intra-umbilical 11 mm trocar was inserted after three liters of CO2 pneumo-insufflation using Veress’ needle. Subsequently, three 5 mm secondary pelvic trocars were placed. One each in the left and right iliac fossa and one in the midline four cms sub-umbilically. Intra-operatively the uterus was found to be enlarged, irregularly distorted due to multiple leiomyomas, both adnexa were normal. There were no leiomyomas noted except in the uterus.(fig 1).

Upon opening the left side posterior peritoneum, left uterine vein appeared exceptionally dilated with a fleshy lump fluctuating within. The contralateral uterine vein was examined and found to be normal. (fig 4) A left intravenous leiomyoma was suspected. (fig 2,3).

The plan to trace the extent was laid down. Therefore, before the tackling the uterine pedicle, retroperitoneal dissection was carried out and the ureter was moved out of harm’s way. The left uterine artery origin and the uterine vein with IVL reaching up to internal iliac vein were exposed and isolated with careful dissection. The extent of IVL was traced by gentle palpation using a pair of atraumatic graspers and its tail end was found extending up to ¬¬the left internal iliac vein (fig 5).

Prophylactic ligation of uterine artery done at its origin. The ligation of the vein beyond the tumor limits is the most essential step to reduce the blood loss or probable failure to seal it by using electrical energy due to unusually larger and flaccid lumen (fig 6,7).

The tubular tumor was extracted by venotomy. (fig 8,9,10) Subsequently, a hysterectomy with bilateral salpingectomy was completed.
On gross examination of the specimen, the intravenous tumor revealed to be a smooth tubular non-luminal tumor with similar consistency as a leiomyoma (fig 11,12). Histopathological examination confirmed the diagnosis of IVL.

Fibroids are extremely heterogeneous in their pathophysiology, size, location and clinical symptomatology. New information is rapidly accumulating about the genetic subgroups that lead to fibroid formation, which might aid further understanding of the clinical heterogeneity of this disease and lead to individualized treatments. Uterine smooth muscle tumors are largely benign, but may exhibit features of malignancy in few cases. The clinical prediction and diagnosis of such intermediate tumor is challenging. This spectrum of smooth muscle neoplasia covers numerous morphologically benign smooth muscle proliferations with the features of malignancy namely, local infiltration, intra-vascular extension or invasion, dissemination and distant extension or metastasis. In most cases, histopathologic features as there are the presence or absence of atypia, proliferative activity, and a particular pattern of necrosis are easy to identify as to determine if a smooth muscle neoplasm is benign or malignant.

IVL belongs to a class of smooth muscle tumors with a malignant potential . This means for the most part, that these tumours are benign yet have some growth pattern that mimicks malignancy. Specifically, these features include vascular invasion and growth, disseminated growth within the uterus or abdominal cavity, and possible spread to the lung. There have been no long-term studies of intra-tumoral vascular invasion, but it may be a forerunner of IVL in some cases and may be the origin of the enigmatic disorder called benign metastazing leiomyoma in other cases. With further growth, this smooth muscle proliferation may extend into the uterine wall, and a tumorous source may not always be evident. This pattern of intravascular growth also may be seen in renal cell carcinoma & endometrial stromal sarcoma.

The origin of this unusual smooth muscle proliferation is unclear. Knaeur et al stated, the tumor is comprised of smooth muscle cell arising directly from venous walls of uterine or pelvic vein.[4] Clement et al have reported a series of cases in which the histologic features of IVL were similar to that of benign uterine leiomyomas.[5]

Kir et al studied the immunoprofile of IVL and found it to be matching the myometrium and benign leiomyomas, and not the vascular endothelium[6] Sitzenfry et al stated, the intima of venous channels is invaded by leiomyomatosis cells originating from the uterine myometrium.[7] Cytogenetic studies have also specified IVL of uterine origin. Karyotypes of both the lesions have shown a derivative chromosome viz (?), der(14)t(12;14)(q15;q24) which was commonly observed in uterine leiomyomas The ability to grow within venous spaces reflects some additional genetic variations. Intra-venous extension might be considered an aggressive biologic property. Despite this malignant character, the IV growth is usually slow.[8]

The extension is usually unilateral and occurs more commonly through the lumen of uterine vein, towards the internal iliac to progress towards the common iliac and finally the inferior vena cava(IVC). Less common is the extension via the ovarian vein towards the renal vein and the IVC. Adhesion to the vessel wall and atypical histology may be associated with an aggressive clinical course. A relationship to benign metastasizing leiomyoma in the lung also has been suggested.[9]

diagnosis is difficult because patients maybe asymptomatic despite an extensive intravenous extension. Patient present with pelvic pain and bleeding when the IVL is associated with uterine leiomyomas. When the tumors grow into the larger vessels and intracardiac extension is present the patient presents with dyspnoea, syncope or abnormal ECG or even sudden cardiac death.

Imaging studies are essential for the diagnosis of IVL. CT scan and MRI are useful for diagnosing intra-luminal tumors. In most cases the diagnosis may be intra-operative or post-operative.

In most cases, excision to prevent hemodynamic consequences and hysterectomy to remove leiomyomas are sufficient to cure the condition. With complete resection the recurrence is rare. Still the recurrence rate of IVL is around 30%[10], hence follow-up is mandatory. Bilateral oophorectomy should be carried out in all cases as 75% of the recurrences were found in patients in whom the ovary was preserved.

In this case, the diagnosis of IVL was made intra-operatively and managed without any complications. Patient has been counselled about the rarity of the condition, need of follow up and to report in case of cardio-respiratory symptoms.

High degree of suspicion may lead the surgeon to intra-operative diagnosis of IVL whenever the uterine veins are unusually large, non-collapsible and manifest pink instead of the usual blue color, in the patients undergoing surgery for leiomyomas. Knowledge of retroperitoneal dissection steps and the existence of the IVL will result in a favorable surgical outcome.