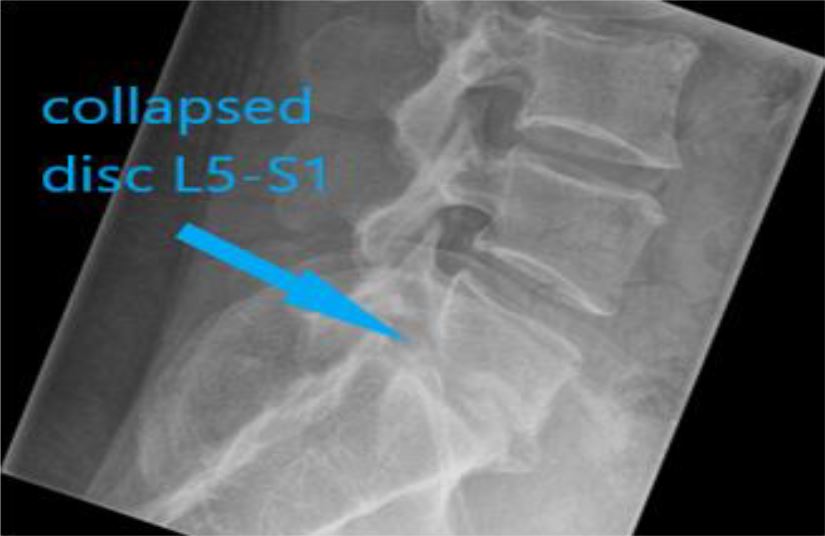 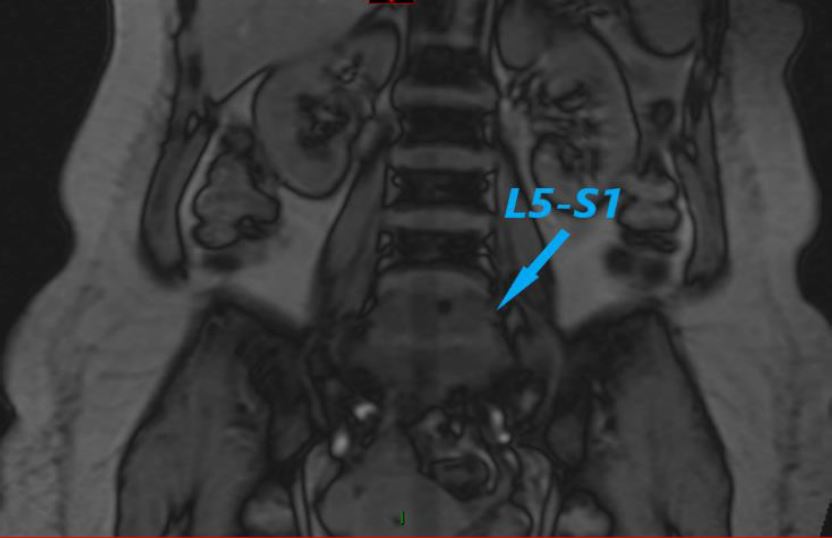 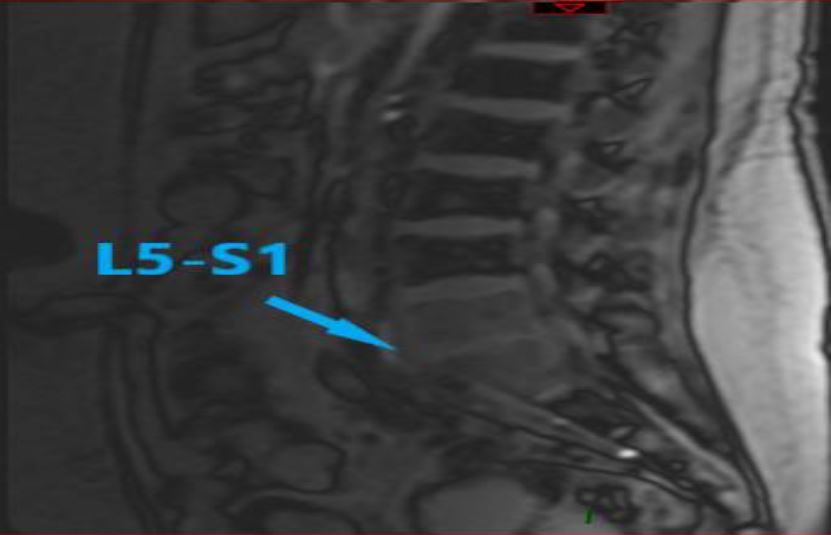 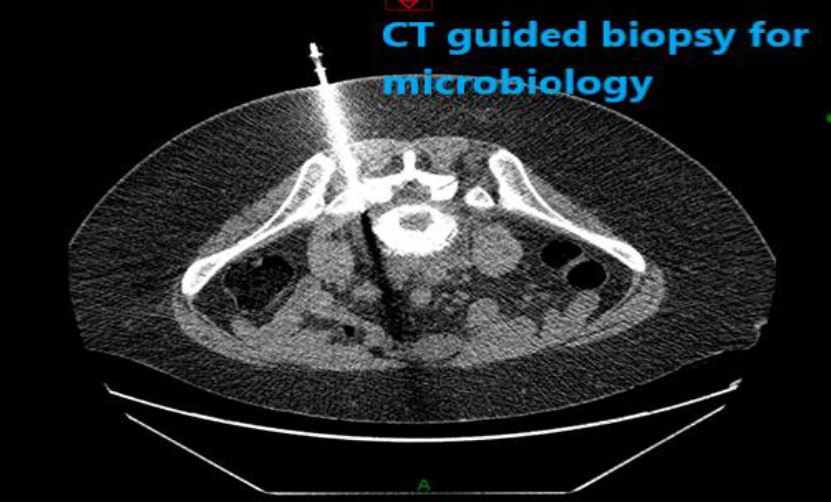 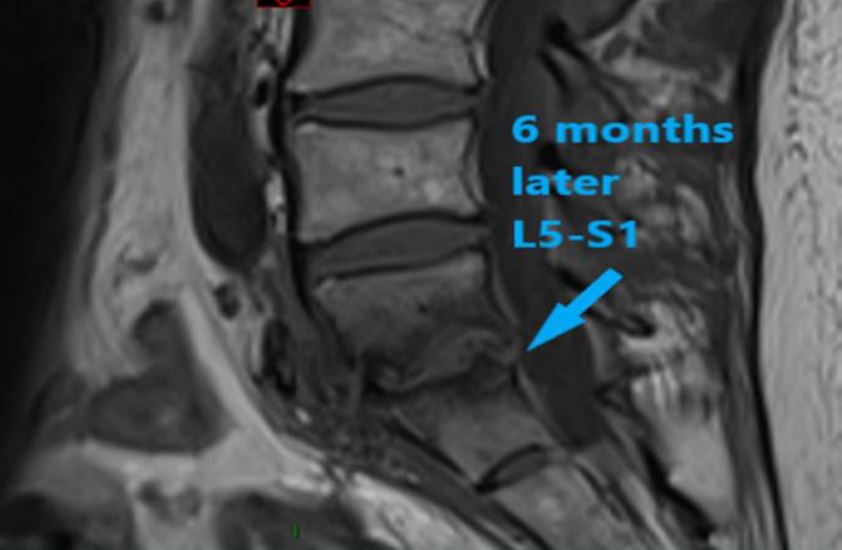 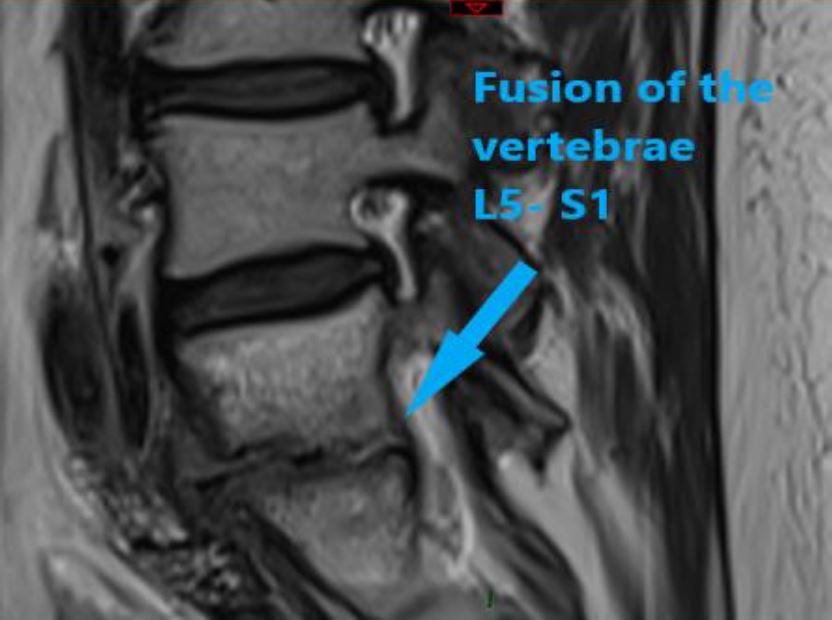 We present a case report of spondylodiscitis after sacro-hysteropexy: A 47-year-old patient reported severe back pain after laparoscopic sacro-hysteropexy with a PVDF mesh and Ethibond “0” suture as an attachment method to the anterior longitudinal ligament of the spine. Initial treatment with intravenous antibiotics helped, but after symptoms recurred, the mesh was completely removed laparoscopically a year later. Your symptoms gradually improved over the next year. She regained her full mobility but there was still minimal back pain.

The knowledge of typical symptoms such as lower back pain, radiating pain symptoms after laparoscopic sacro-hysteropexy leads to a timely diagnosis. MRI is a diagnostic gold standard for the final diagnosis of lumbar spondylodiscitis. Careful suturing in the anterior longitudinal ligament only at the level of the promontory / S1-S2 while avoiding the intervertebral disc space is of the greatest importance. Rapid diagnosis and multidisciplinary management are the cornerstones of successful treatment.

Laparoscopic sacrohysteropexy (LSH) is an often-used method to correct apical prolapse while preserving the uterus using an alloplastic material (polypropylene, PVDF or other mesh). Lumbar sacral spondylodiscitis is a rare but serious mesh complication after laparoscopic sacrohysteropexy or ventral mesh rectopexy (VMR). A distinction is made between infectious and non-infectious discitis [1]. In most cases, spondylodiscitis is referred to as pyogenic discitis and vertebral osteomyelitis and is restricted to the intervertebral disc (discitis) and the adjacent vertebrae (vertebral osteomyelitis) [2]. So far, only one case using PVDF structures (Dynamesh) and non-absorbable sutures (Ethibond 0) as an attachment method to the anterior longitudinal ligament of the spine has been published. Most case reports relate to polypropylene net and titanium screws or staplers.

A 47-year-old patient with a BMI of 31 was referred by the family doctor in May 2017 after a failed physiotherapy with symptoms of uterine prolapse. Her medical history reported four spontaneous births with large babies and one laparoscopic gastrectomy.
The gynecological examination showed a descensus. Essentially an isolated uterine prolapse POP-Q stage III (+3 cm). In addition, a mild cystocele as well as a mild one (up to +1 cm) Since these were compensated for by the reduction of the uterus alone, no additional interventions were planned for the LSH). In the general anamnesis, the patient reported mild stress incontinence as well as severe bipolar disorder.

In January 2018, the laparoscopic sacrohysteropexy was performed using a PVDF (DynaMesh) with fixation on the anterior longitudinal ligament of the spine and on the posterior wall of the uterus. The mesh was fixed in both directions with Ethibond 0. Inpatient care was uncomplicated and the patient was discharged home on the same day.

In the following months the patient gradually developed increasing back pain. The patient had persistent symptoms such as: stiffness of the lumbosacral portion, low back pain (LBP), persistent swelling, inability to bend over, pain radiating to the right lower extremity, pain radiating to both buttocks and occasionally the front of both thighs and even with temporary paresthesia of the back of both feet, as well as very limited general leg mobility. The patient was admitted to the orthopedic surgeon’s office in April 2018. The symptoms could be alleviated using non-steroidal anti-inflammatory drugs and opiates.

In an interdisciplinary conference (MDT) with the participation of colorectal surgeons, urogynecologists, orthopedic surgeons, neurologists, neurosurgeons and physiotherapists, the patient is treated with a class IV antibiotic (teicoplanin) for a further eight weeks. The symptoms only improve slowly but ultimately significantly.

The symptoms reappeared after the therapy was discontinued, which led to resumption two months later (09.2018) with increased inflammation markers and severe back pain. The CRP had increased significantly from 11 mg / l in the previous week to 131 mg / l. This was addressed with a second antibiotic treatment (flucloxacillin for four weeks), which was again associated with the significant improvement in symptoms.

The MDT subsequently decided to remove the mesh in order to reduce the risk of the symptoms recurring or recurring and the inflammatory reaction recurring in the future. In January 2019, a laparoscopic total mesh removal was carried out, a total of one year since the first operation.
Three years after the initial surgery, the patient was able to return to normal daily activities and mobility. Occasional intermittent LBP or electrical stabbing pain that radiates to her right leg at rest or when moving is still present. She describes an improvement in stress incontinence but reports of a de novo overactive bladder (OAB).

The current gynecological examination shows the following anatomical results: A medial cystocele stage POP-Q II, a rectocele stage POP-Q II. The cervix descends up to approx. 2 cm from the introitus. She does not indicate any bowel problems. As an alternative, we offered her a laparoscopic pectopexy with PVDF mesh (DynaMesh PRP) for treatment.

Up to December 2019, 33 published cases of lumbar spondylodiscitis after sacral hystero-, colpopexy and (or) rectopexy with meshes could be identified in PubMed. [3] The median time to onset of symptoms was 14 months and ranged from 6 days to 8 years. In our case, the symptoms appeared soon after the procedure. Lower back pain occurred in all cases, 38% suffered from fever, 35% from referred leg pain. 71% of the patients developed a local pathogen infection. Antibiotics alone were only effective in 12% of the total cases. Mesh removal and debridement were effective in most cases, while multidisciplinary surgery, mainly orthopedic, was required in 44% of the cases. 88% of the patients were able to return to their normal daily activity and only 6% of the patients had intermittent LBP.

Neurosurgical intervention was required in 24% (n-10) of patients. In our case, the decision to remove the mesh was delayed by a year due to the initial improvement in symptoms with intravenous antibiotics. Due to the recurrence of symptoms, a multidisciplinary team has usually recommended that the mesh be completely removed.

Persistent LBD and referred leg pain after promonto fixation or sacropexy (even 18 months later) can be a symptom of lumbar spondylodiscitis. Today, MRI is a diagnostic gold standard for detecting lumbar spondylodiscitis. Knowledge of the typical symptoms, timely diagnosis, and consideration of early network removal should always be taken into account.
The further improvement of surgical practice while observing careful suture or staple placement only in the anterior longitudinal ligament of the spine at the level of the S1-S2 while avoiding the intervertebral disc space is an option to avoid the complication. Rapid diagnosis and multidisciplinary management are the cornerstones of successful treatment.

Unfortunately, it is not possible to differentiate which role the fastening material plays, just as the fastening location has a more decisive influence than the mesh itself. Since the sutures or staples and screws ultimately penetrate the disc, the mesh does not. 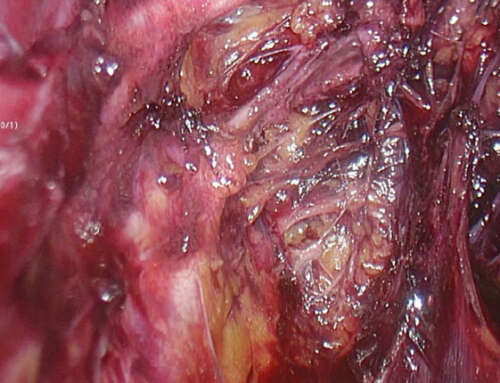