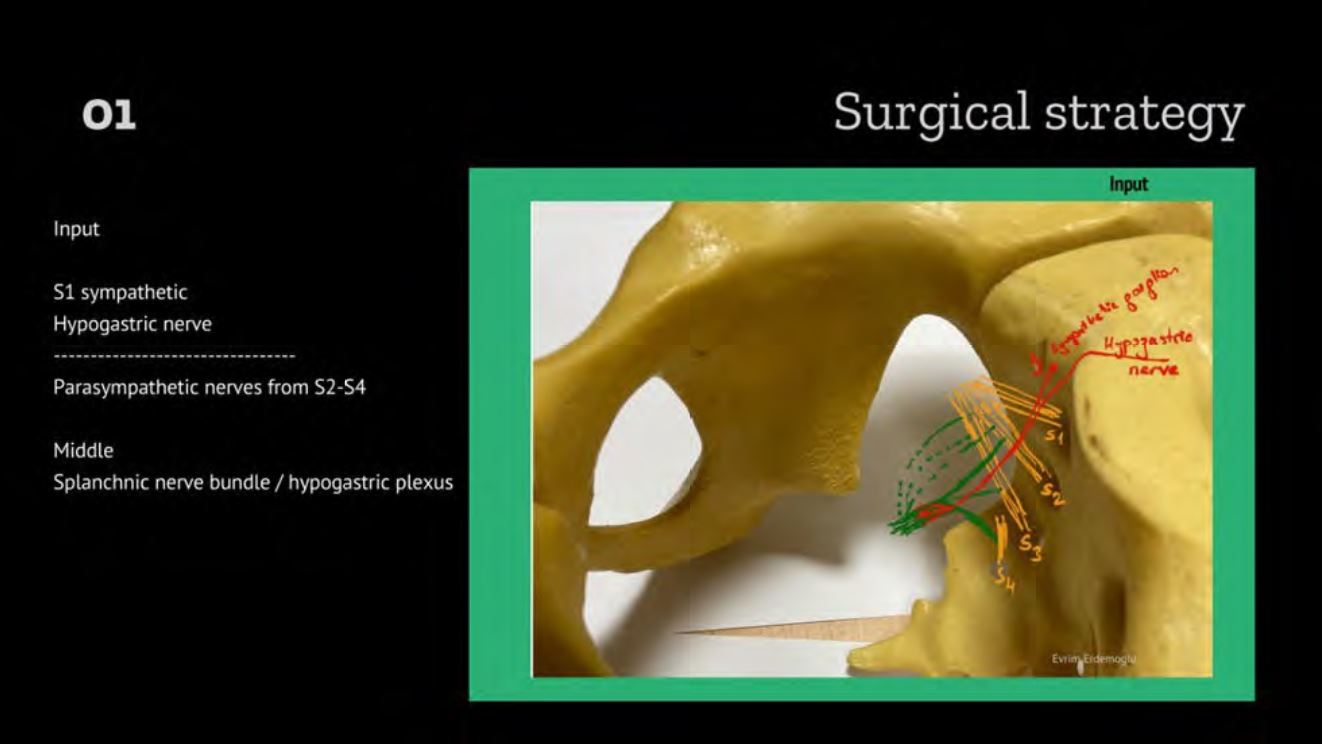 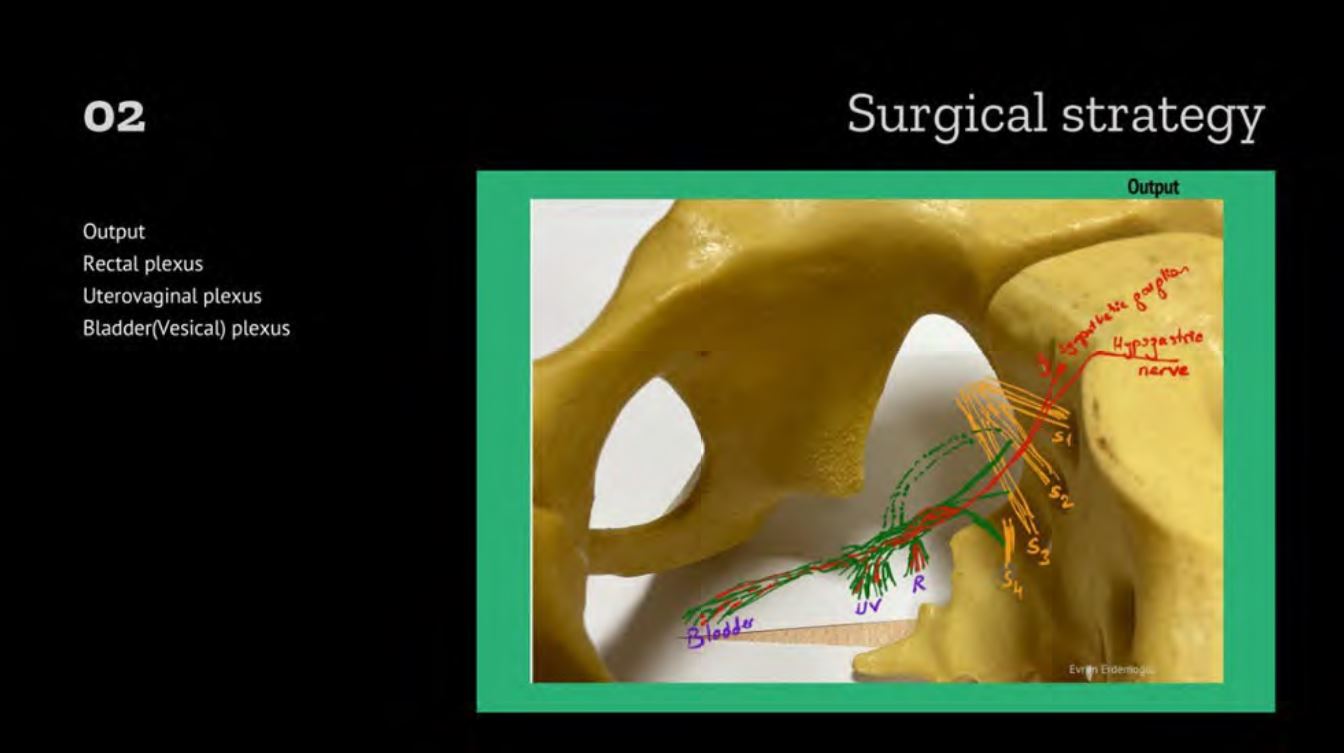 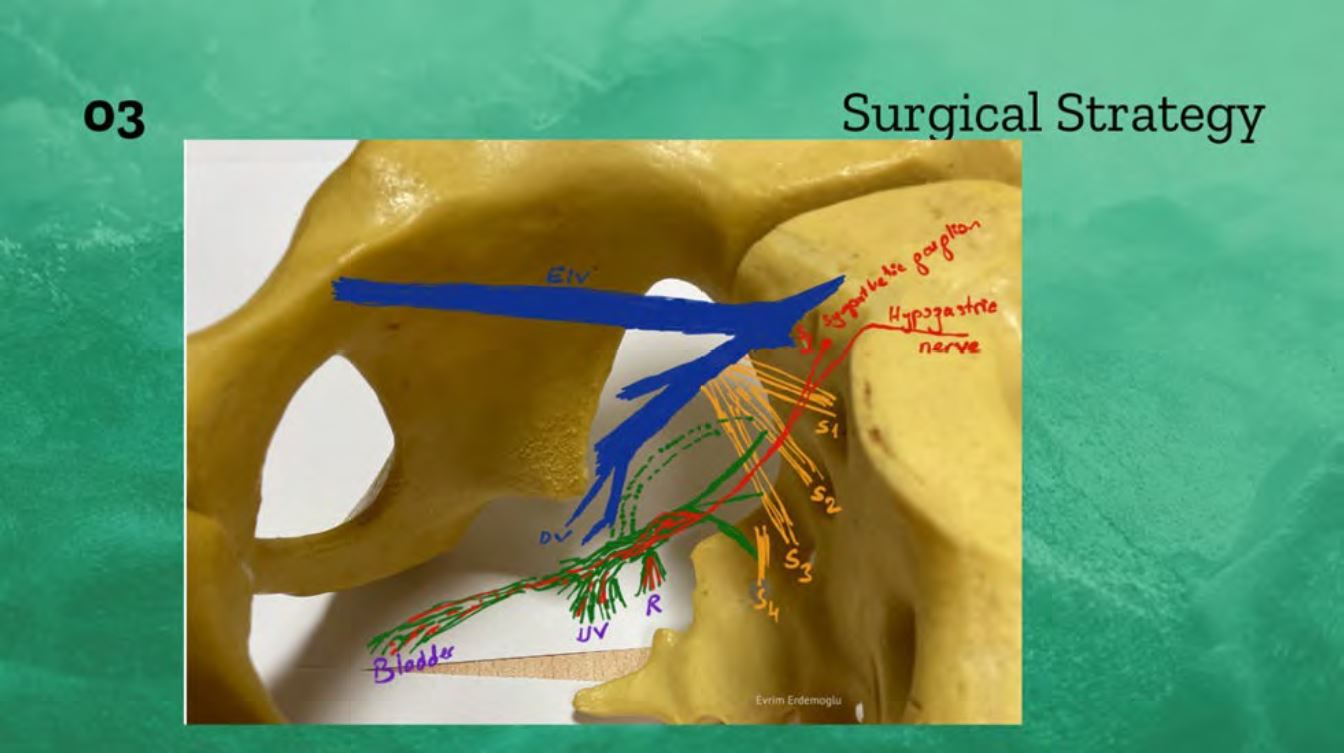 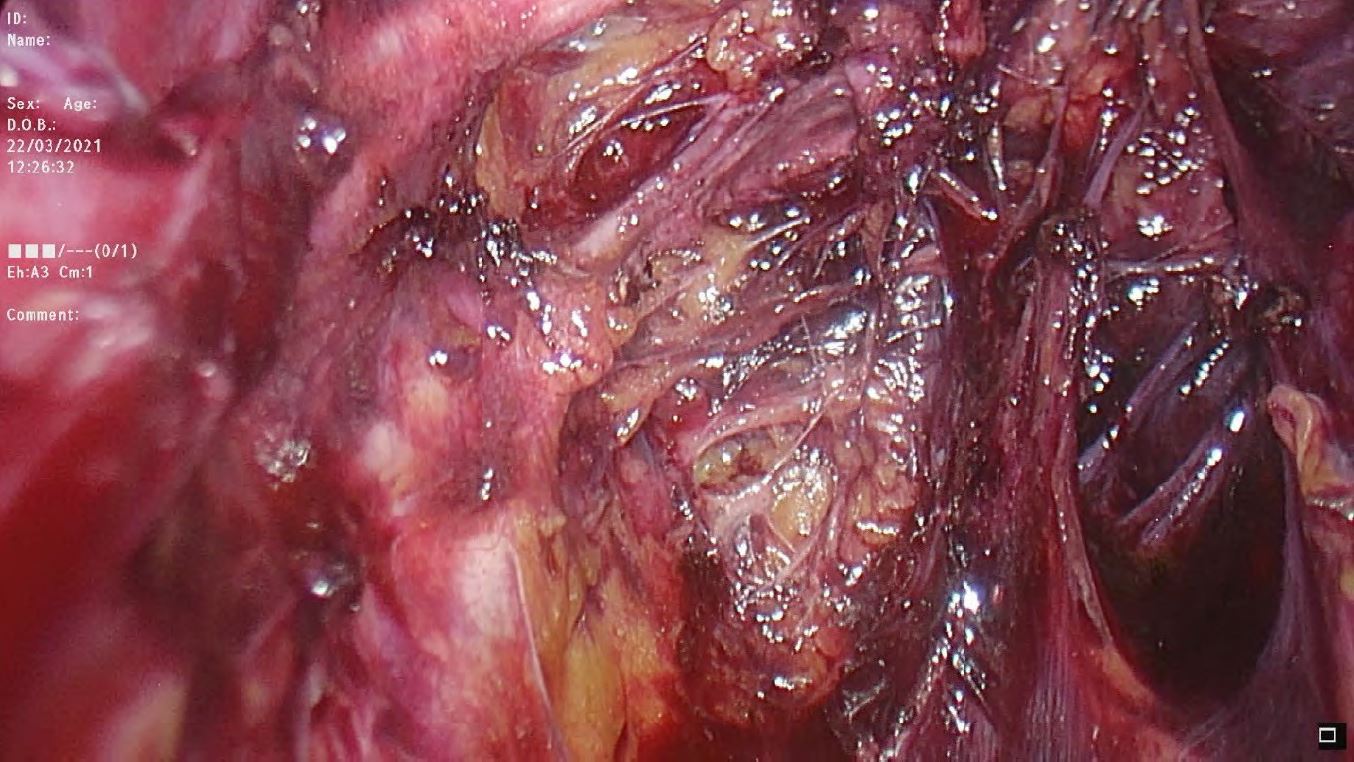 Figure 2: Laparoscopy enables magnification, optimizes dissection and tailoring of surgery as well as preservation of pelvic nerves in previously irradiated patients. Splanchnic nerves and branches emerging from the S2-S4 root are shown on the left parametrium.

The use of radiotherapy has a devastating effect on pelvic tissues. TGF beta and cytokines mediate significant effects of radiotherapy on tissues. Radiotherapy causes excessive collagen deposition, increased extracellular matrix, fibrosis and inflammation. The molecular effects are clinically evident. An important side effect is vascular damage and hypoxia. These may lead to nerve damage and propensity for bladder and rectum dysfunction, as well as a more complex surgery. Laparoscopic nerve-sparing surgery after chemo-radiation is rarely reported. The aim is to demonstrate the feasibility and technique of laparoscopic nerve-sparing surgery without the use of a uterine manipulator in recurrent/persistent locally advanced cervical cancer after chemo-radiation.

A step-by-step demonstration of the technique in a surgical video, including the strategy for protecting pelvic nerves and achieving complete surgical resection.

Although a considerable debate about the results of the LACC trial, claiming the overall survival is worse in laparoscopically treated early-stage cervical cancer, is popular and ongoing, there have been reports of prospective non-randomized trials of the safety of laparoscopy and robotic surgery after chemoradiation for locally advanced stage cervical cancer (1-3). However, literature about laparoscopic nerve-sparing surgery after chemo-radiation is scarce. Pelvic exenteration or radical hysterectomy is the standard treatment in selected patients with persistence/recurrence after chemo-radiation.

Not only oncological outcomes but the quality of life is also an important measure for cervical cancer patients. Therefore, laparoscopic surgery can provide optimized visualization of pelvic nerves, structures and meticulous dissection, early ambulation, less need for analgesics and early discharge (2). Nervesparing technique by laparoscopy can improve outcomes of surgery and minimize pelvic dysfunction rates. Laparoscopic nerve-sparing radical hysterectomy is safe and feasible in experienced centers even after chemo-radiation which may cause severe adhesion and fibrosis.

Three women aged 35, 59 and 52 with BMI of 22, 27 and 24 had laparoscopic nerve-sparing radical hysterectomy for persistent tumor after chemo-radiotherapy. All had a history of laparoscopic extraperitoneal lymph node dissection followed by pelvic IMRT irradiation in 25 fractions 1.8 Gray totaling 45 Gray along with cisplatin 35mg/m2 and brachytherapy HRCTV in 5 fractions 6 Gray totaling 80.9 Gray. Pelvic nerves were protected on both sides in two patients in whom 1/3 upper vagina was resected. The third patient had a persistent mass on the right lateral fornix and cervical corner therefore surgery was tailored to resect splanchnic nerves on the right side after exposing nerves with dissection and the nerves on the left side were preserved. Half of the vagina was incorporated into the specimen in this patient.

One umbilical and three ancillary trocars were placed in the lower abdomen, in case of necessity a fourth trocar in the left upper quadrant was also placed. No uterine manipulator was used during the surgeries. The details are shown in the video article. After exploration of the cavity, the retroperitoneum was opened parallel to the Infundibulo pelvic ligament. Medial and lateral para-vesical and para-rectal spaces were developed towards the pelvic floor. Retro-peritoneal structures were identified; the external iliac artery/vein, the internal iliac artery/vein, the uterine artery and the deep uterine vein, the obturator nerve and the superior vesical artery. The Okabayashi space was developed. The pelvic splanchnic nerves from S2-S4, the hypogastric nerve and the branches of the deep uterine vein were dissected. Figure 2. The uterine vein, the iliac vein, the ureter, the sacrum, the middle rectal artery and the pelvic floor are the structures that help to reach the splanchnic roots.

The rectovaginal and vesicovaginal spaces were developed. Strategically mobilization was started from caudal to cranial and the uterine vein was first coagulated and transected. Splanchnic nerves were mobilized followed by dissection of the ureter along the tunnel and the uterine artery was preserved as long as the dissection allows. The uterosacral ligaments were transected. The ureter was mobilized first anterolaterally and then anteromedially in the tunnel. Branches of nerves running towards the bladder were identified and protected. Nerve branches running towards the cervix were transected. The bladder pillars were identified. The round ligament was transected. Deep and superficial pillars were transected lateral to the ureter. On the lateral side of the tunnel and bladder pillars, a meticulous dissection of veins running towards the bladder in the paracervical tissue was performed. The endopelvic tissues lateral to the ureter and bladder were all mobilized. Resection of the specimen was tailored under visualization of the pelvic nerves, the vessels, the ureter and the other tissues. The vaginal cuff was laparoscopically sutured in two patients and vaginally sutured in one patient.

Persistent/recurrent cervical carcinoma after chemo-radiation can be safely treated by laparoscopic nerve-sparing radical hysterectomy in experienced centers and the technique is feasible without a uterine manipulator. The good magnified visualization and meticulous dissection provided for during laparoscopic surgery make the approach advantageous for the protection of nerves. In addition to the general benefits of laparoscopy, this approach in previously irradiated patients may prevent the worsening quality of life.