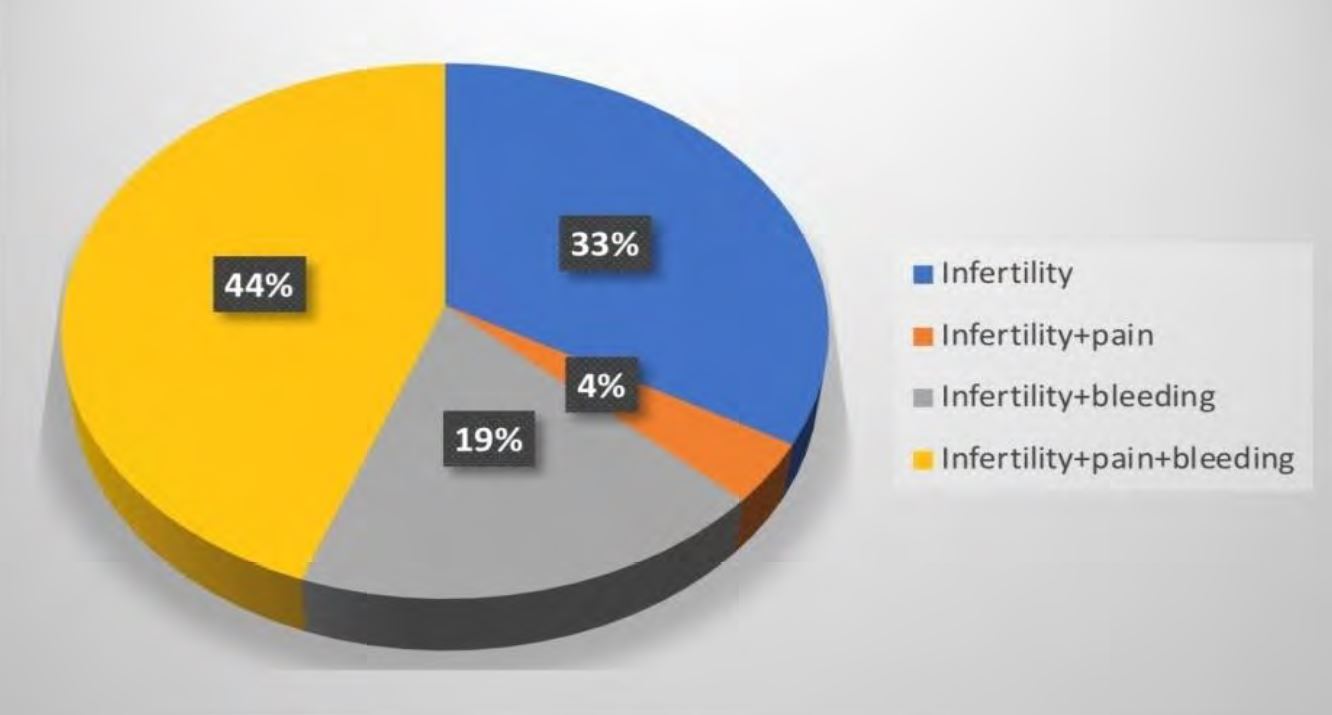 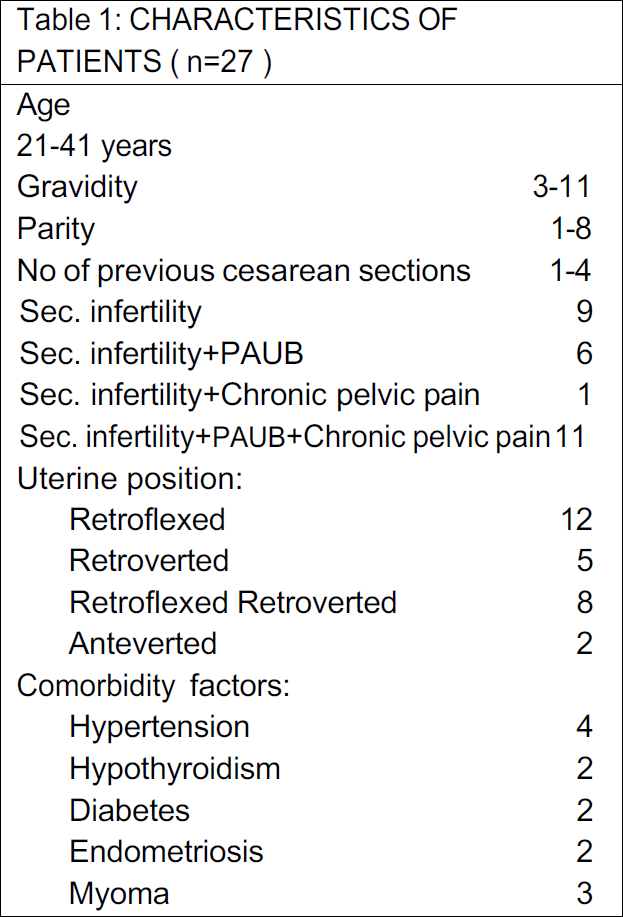 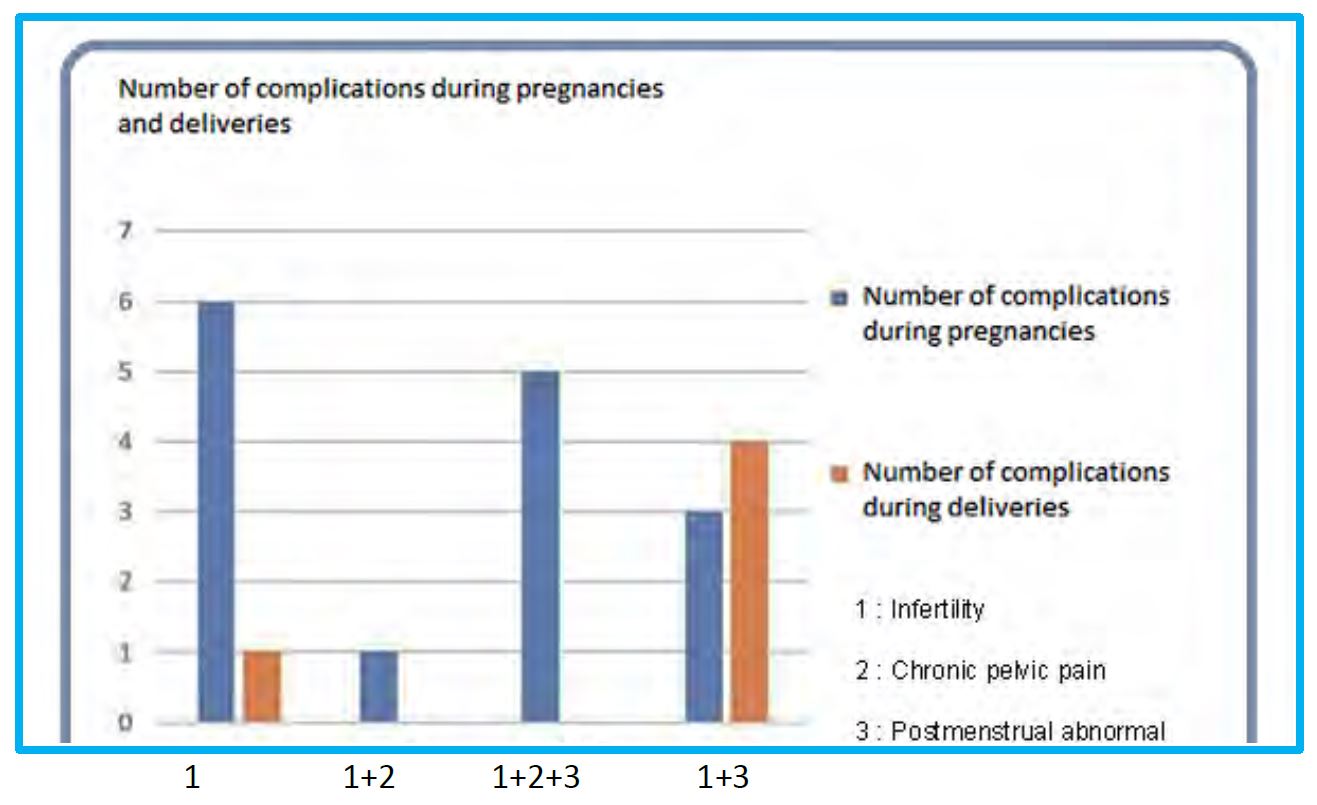 Fig.2 Number of complications during pregnancy and delivery according to symptoms 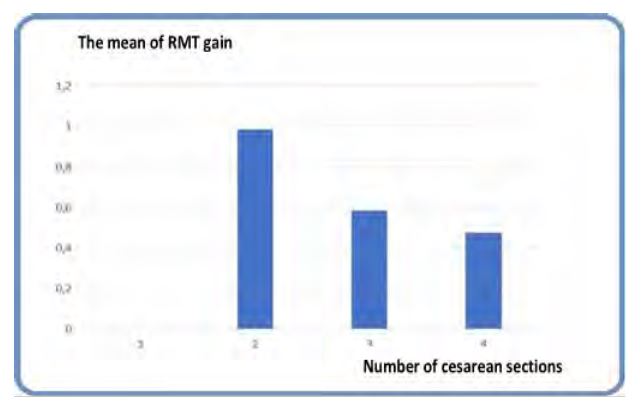 Fig.3 The mean of RMT gain according to the number of Cesarean Sections 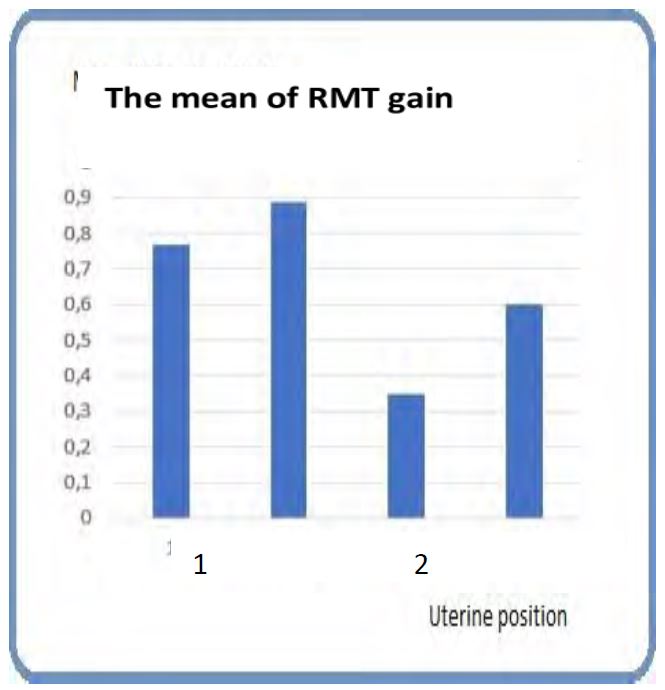 Fig.4 The mean of RMT gain according to uterine position 1 Anteverted 2 Retroverted 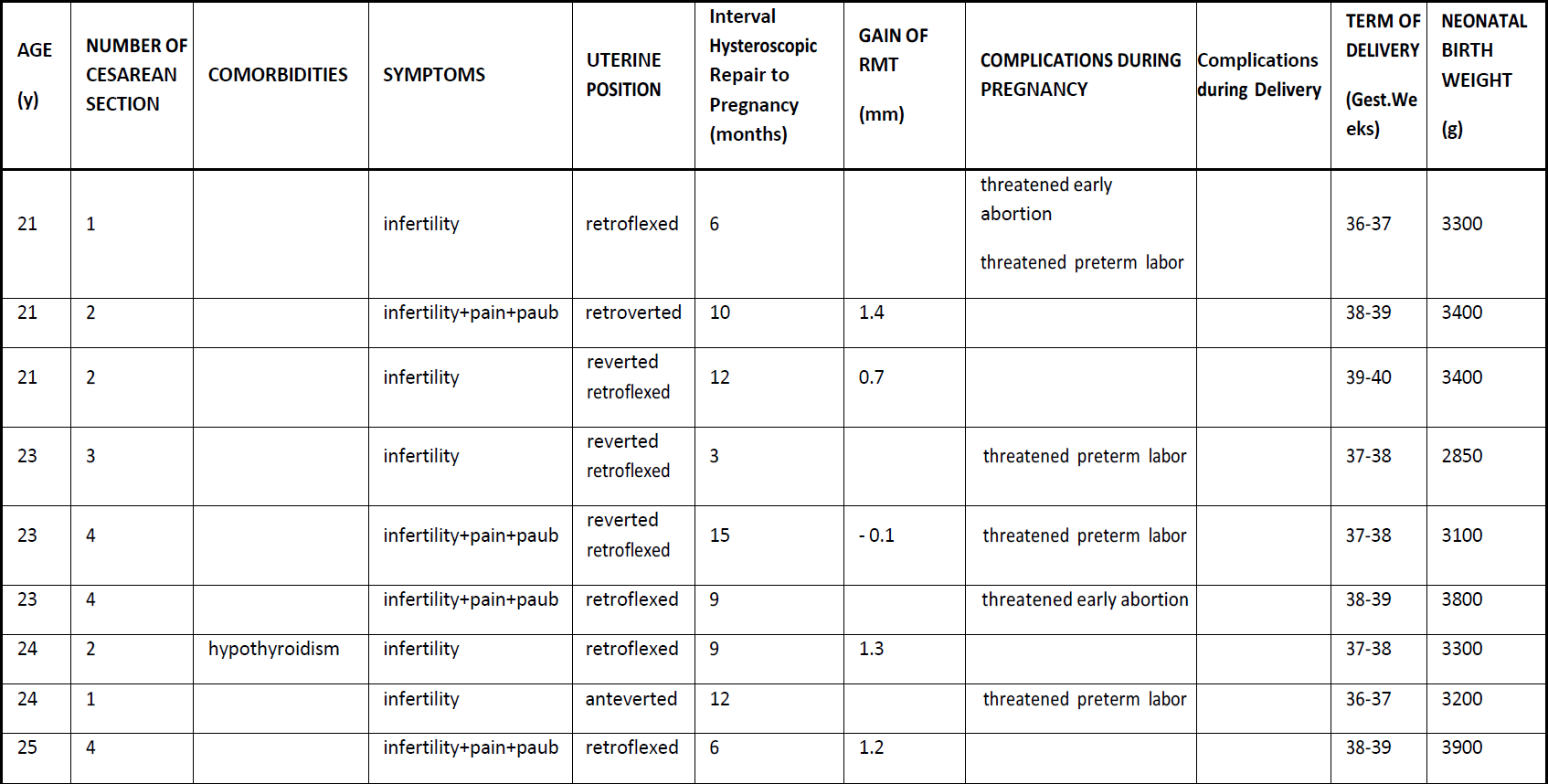 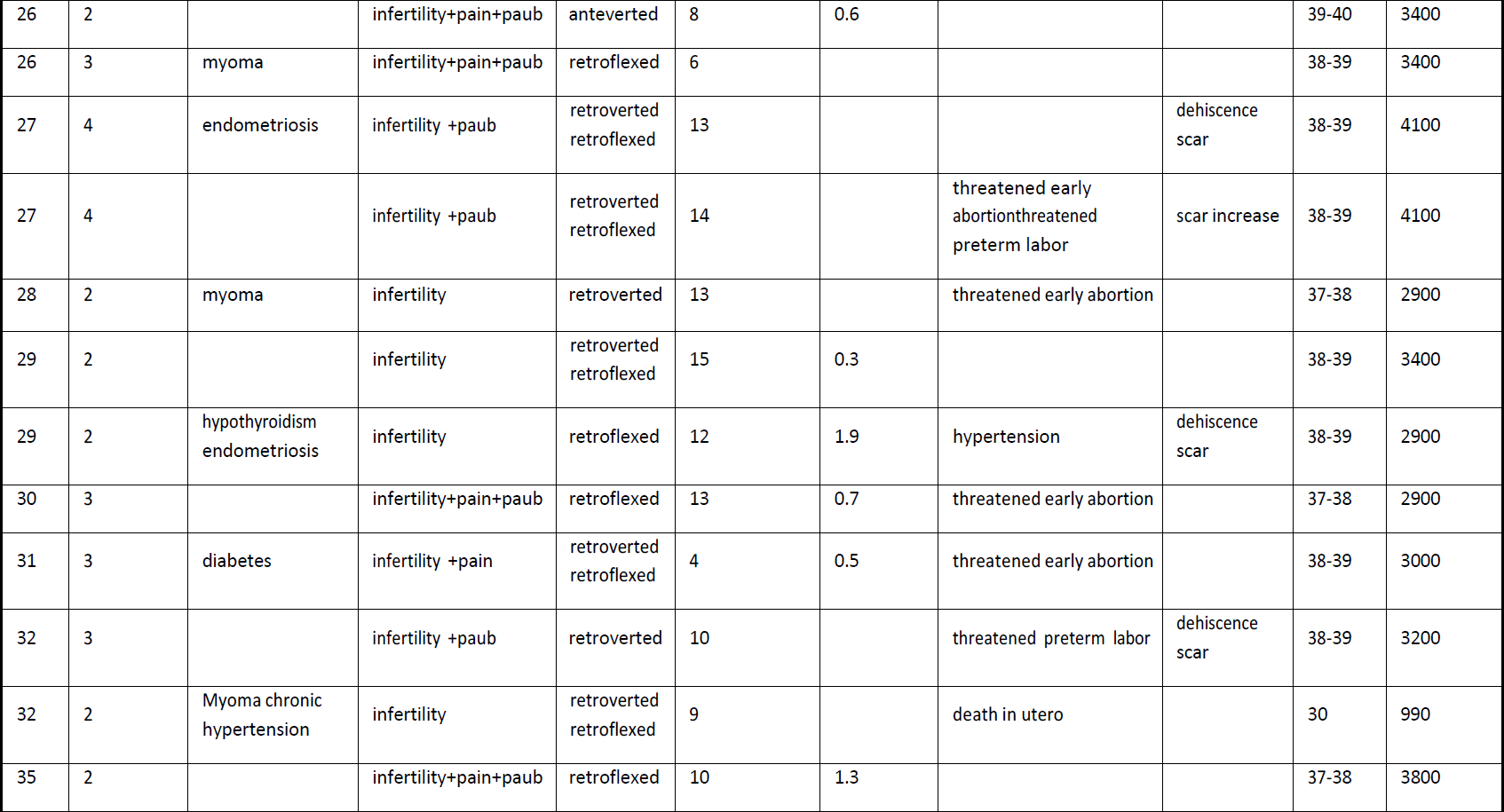 Isthmocoele, or cesarean scar defect, is an indentation standing for myometrial discontinuity in the anterior wall, with a base communicating to the uterine cavity at the site of the previous cesarean section scar (1). The possible symptoms of the latter are: infertility, postmenstrual abnormal uterine bleeding, dysmenorrhea, chronic pelvic pain, and dyspareunia which have an impact on the quality of life. The study at hand aims at evaluating obstetrical outcomes as well as residual myometrial thickness after hysteroscopic repair of symptomatic isthmocoele. The investigation included 27 isthmocoele patients suffering from secondary infertility regardless of the other associated symptoms, such as pelvic pain or postmenstrual abnormal uterine bleeding.

For all patients, the defect was diagnosed by transvaginal ultrasound and confirmed by office hysteroscopy. The goal of hysteroscopic surgery is to facilitate cyclic drainage by resecting the inferior edge and superficial cauterization of the defect (2-3-4-5-6). Among the 27 patients, 24 had at term deliveries with complications during pregnancy and delivery, such as threatening early abortion, preterm labor, uterine dehiscence and increase in volume of the scar. In infertile women with residual myometrial thickness superior of 2.5 mm, hysteroscopic repair is found to be an efficient management to ensure at term pregnancies and safe deliveries (7) even if the residual myometrial thickness did not increase after surgery.

Cesarean Section (CS) is one of the most performed surgeries in the world. Recently, the number of Cesarean deliveries has hugely increased due to various sociocultural factors (8). The prevalence of isthmocoele is still unknown. However according to the most recent available data, the Cesarean Scar Defect (CSD) rate ranges from 6 to 27.2% after one CS and reaches 100% after at least three CS (9- 10- 11). Isthmocoele was first described by Poidevin in 1961 as a, “wedge shaped defect in the uterine niche” (12). The latter mentioned is also referred to as cesarean scar defect or pouch. Isthmocoele is characterized by an indentation of more than 2.5 mm standing for myometrial discontinuity in the anterior wall, with a base communicating to the uterine cavity at the site of the CS scar (13). To make the diagnosis, sonohysterography and hysteroscopy are the gold standard (14- 15). As far as the physiopathology of an isthmocoele is concerned, there is no exact underlying mechanism to explain the occurrence of such a disease. For the sake of simplicity, one main factor could be identified as contributing to the manifestation of the CSD; inadequate healing of the CS scar. Various risk factors are associated with an isthmocoele. These comprise more than one CS, a retroflexed uterus, pre-eclampsia, maternal age less than 30 years, a duration of labor for more than five hours, cervical dilation of more than 5 cm at the time of delivery, a lower station at delivery, an incision in the cervical area, the use of oxytocin, the exclusion of the endometrial layer during the repair, onelayer closure of the myometrium, the use of slow absorbable sutures, and a more ischemic closure (16-17-18-19).

Generally speaking, most of isthmocoeles are asymptomatic. However, some symptoms might arise from CSD. These include prolonged menstruation, postmenstrual spotting, continuous brownish discharge, chronic pelvic pain, dysmenorrhea, and secondary infertility. Some obstetrical complications have been mentioned such as ectopic pregnancy in the CSD and uterine rupture in future pregnancies (20- 21). The resection of the inflamed tissue at the site of CSD can be performed either by operative hysteroscopy, laparoscopy, or vaginal surgery (22-23-24-25-26). Two different surgical approaches are used currently to treat CSD namely the hysteroscopic approach and/or the laparoscopic one. The choice of the specific approach is highly dependent on the residual myometrial thickness (RMT) (27-28-29-30-31).

Among the patients who have been treated for CSD, some will experience a normal pregnancy. The present study has focused on the patients’ pregnancy course after being subject to the treatment of a CSD. In the literature, many studies reported the resolution of symptoms and infertility outcomes after hysteroscopic repair. One of the most relevant papers is that of Gubbini and al in 2011. Gubbini reported in a series of 41 patients, 100% pregnancy and 90.24% of live birth rate. Tsuji and al in 2020 obtained in a series of 38 patients, a pregnancy rate of 71% and 85.18% of live birth rate (7-10).

This retrospective study was conducted at a private clinic in Oran, Algeria from January 2019 through February 2021. 27 patients with secondary infertility due to CSD whether associated or not with abnormal uterine bleeding and/or chronic pelvic pain with a residual myometrium thickness superior than 2.5 mm at transvaginal ultrasound (TVS) were included.

Patients with a residual myometrium thickness less than 2.5 mm, secondary infertility due to factors other than an isthmocoele were excluded, also excluded were patients lost in follow up. The diagnosis of isthmocoele was established using TVS and confirmed by office hysteroscopy using a 2.9 mm rigid telescope 30⁰ fore oblique final lens (Karl Storz SE & Co KG, Tuttlingen Germany) between day 7 and day 12 of the cycle.

Operative hysteroscopy was performed by the same surgeon, in most of cases, under general anesthesia using a 26 French bipolar resectoscope with a 12⁰ fore oblique lens (Karl Storz SE & Co KG Tuttlingen, Germany). The uterine cavity was distended using a saline solution; an automatic pump (Karl Storz Se & Co KG Tuttlingen, Germany) was used in order to obtain a pressure of 110 mm Hg. The surgical technique consisted in the resection of fibrotic tissues at the inferior edge of the defect using a cutting loop and pure cutting current of 50 – 100 watts. The bottom of the pouch was treated by superficial coagulation with a roller ball electrode. No intraoperative complications have been noted.

All the patients included presented secondary infertility with or without abnormal uterine bleeding and/or chronic pelvic pain (Figure 1).

Baseline anamnesis included: age, gravidity, parity, previous CS, comorbidity factors, and position of uterus (Table 1). The mean of age was 29.25 ±6.31 years. Related to number of previous CS all women had at least one previous CS (7.4%), 9 women (33.3%) had 2 CS, 9 women (33.3%) had 3 CS and 7 women (25.9%) had 4 previous CS. As for the comorbidities, 11 patients had various chronic pathologies such as hypertension, diabetes, hypothyroidism, endometriosis, and the presence of myoma. Regarding the uterine position, 92.5% of patients presented with a retroflected uterus and 7.4% with an anteverted uterus respectively. The (RMT) was measured by transvaginal ultrasound before surgery in all patients and only 17 had measurements 3 months after surgery (it was not possible to perform the measurements in 10 patients).The RMT significantly increased from 3.45 ± 0.55 mm (range,2.9-4.0) to 4.15 ± 1.15 mm (range,3.0-5.3) after operative hysteroscopy (P< 0.001), whereas it decreased in 2 cases (-0.1 mm).

All patients conceived between 3 and 17 months during the follow-up, 22 spontaneously and five after IVF. While 18 patients became pregnant within one year and 9 during five months after treatment. Two pregnancies were interrupted due to early miscarriages and another one resulted in an intrauterine fetal death at 30 weeks of gestation due to chronic hypertension. 24 pregnancies were carried to full term. In three of the patients, cervical cerclage for incompetent cervix was performed. Three patients experienced threatened early abortions, five patients threatened preterm labors, and two patients experienced hypertensive disease. All deliveries were scheduled as CS: three delivered between 36-37 gestational weeks (GW), eight delivered between 37-38 GW, eleven delivered between 38-39 GW and two delivered between 39-40 GW. All babies were born healthy and the mean birth weight was 3725 ± 875g. During CS, three patients presented with scar dehiscence and two patients with a scar increasing

In the series at hand the patients were followed up for 26 months after surgery, the procedure was successful in all cases without complication. All participants became pregnant between 3 and 17 months. 24 of them had at term deliveries with complications during pregnancy and delivery such as threatening early abortion, preterm labor, uterine dehiscence and scar increase (88, 8% of live birth).

18 women (66.6%) conceived during the first year of follow-up. The patients who conceived after 12 months, were either older than 30 years (32) or had less gain of RMT. Two patients did lose 0,1mm of RMT. Except the cases of pregnancy terminations, the problems occurring during their pregnancies were not severe: threatened abortion and threatening preterm labor have been managed medically. The sub-group of patients with more than two CS associated to Postmenstrual Abnormal Uterine Bleeding (PAUB) presented with more complications during pregnancy (57%) and delivery (80%) (Figure 2).

The scar dehiscence’s were associated with endometriosis in two cases, with fetal macrosomia in one and hypothyroidism for the second one, despite a gain of 1.9 mm RMT. The explanation for this gain of RMT could be attributed to fibrotic tissue (33- 34). The enlargements of the scar were associated to fetal macrosomia in two cases and hypertension in another one. Other complications such as placenta accreta, placenta praevia, ectopic pregnancy in CSD or uterine rupture were not present during our follow up as has been reported in some other studies (35). With regards to the number of previous CS, the observation made in this study is that patients who had two CS gain more in RMT than those who had more of two cesarean sections, 1.1± 0.8mm vs. 0.5±0.4mm respectively (Figure 3).

There was a statistically significant relation between the gain of RMT and position of the uterus. The less gain was observed in retroverted retroflexed uteri and the highest one in retroflected uteri (Figure 4).

It is important to note that there was no correlation between improving infertility and anatomic results after surgical correction of the defect. Several studies published previously reported that the Isthmocoele produces a toxic environment due to chronic endometritis and modification of microbiotope, obstructing the passage of sperms and preventing embryo implantation (5, 8, 17). Therefore, the removal of such tissue by hysteroscopy might contribute to improve the environment in the uterine cavity and pregnancy outcomes without improving RMT (5, 23, 26). For researchers the RMT is the most useful measurement in the evaluation of Isthmocoele before and after surgery. In our series, 11 patients out of 27 became pregnant despite a low gain of RMT (0.1- 0.9 mm). Moreover, two patients out of 27 became pregnant later in spite of 0.1mm loss.

These findings lead to speculate that the hysteroscopic treatment of the inflammation associated to an Isthmocoele and the resection of its edges, allowing for cyclic drainage of blood, is more determinant for improving fertility than increasing myometrium thickness.

Therefore, a sub-group of patients could be identified at high risk for obstetrical complications after hysteroscopic correction in relation with their history of abnormal uterine bleeding, endometriosis, retroverted and retroflexed uterus, number of cesarean sections greater than two, and last but not least factors of incomplete wound healing

The present study suggests that hysteroscopic resection is an effective and safe method not only to improve fertility but also to ensure at term pregnancies as well as safe deliveries. The Isthmocoele, even deep, is not a contraindication for a future pregnancy provided that efficient management is applied.

The limits of this study are its retrospective design, small number of patients and missing data, especially in measurements of the RMT. That’s why a prospective study should be performed with a large sample size to confirm these findings.