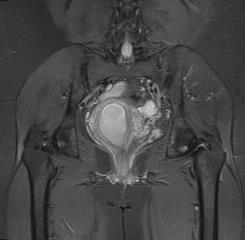 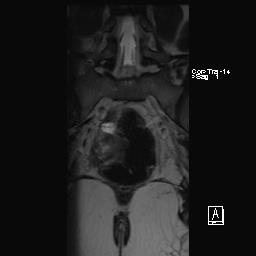 Figure 1: MRI done showing a large antero-verted uterus, with a poorly defined cervix; it demarcates a distinct separation between the cervix and the vaginal canal. 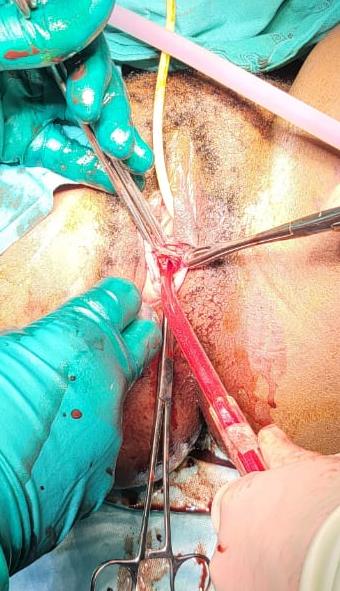 Figure 2: Crucial incision at the level of the vaginal vault 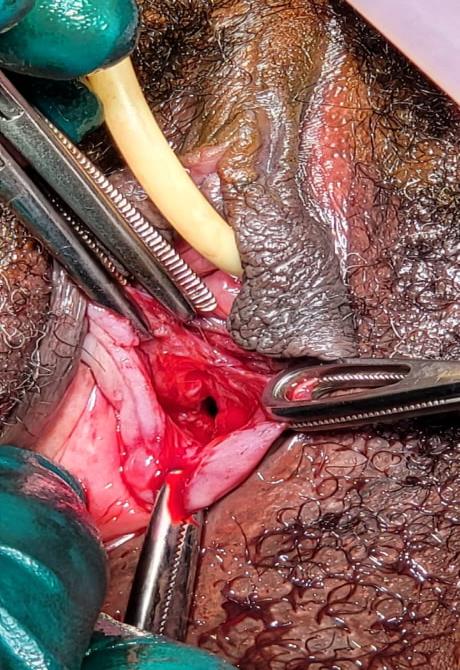 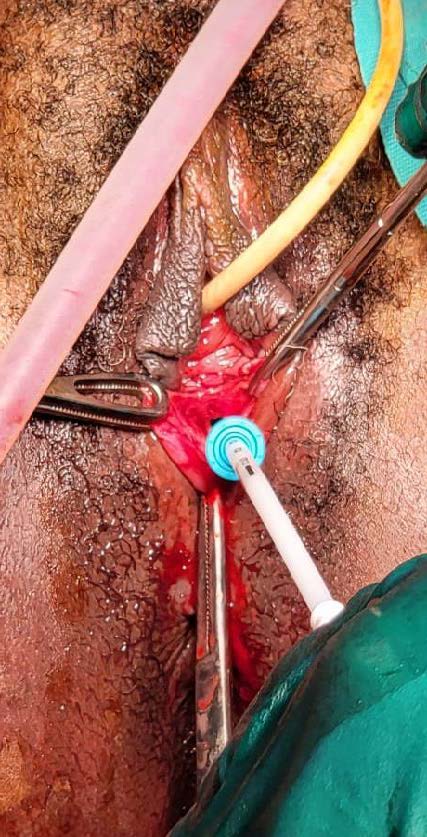 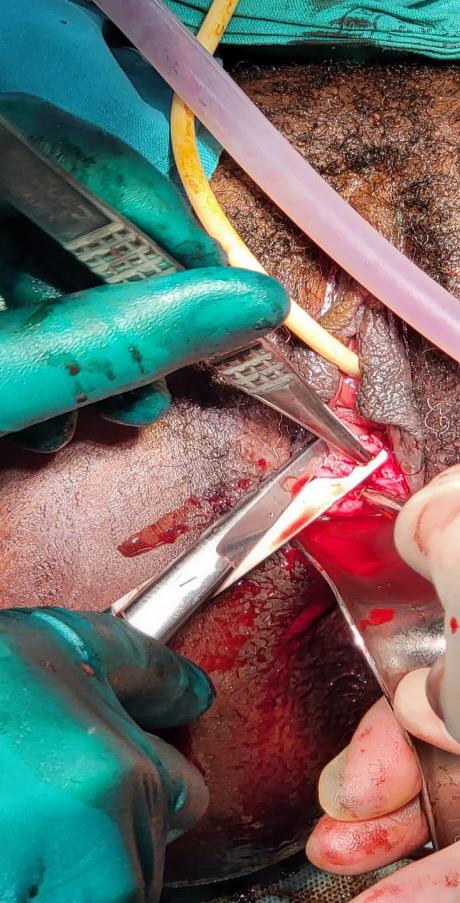 Figure 5: Excess vagina trimmed off, and the remaining vaginal edges sutured in a manner to maintain the opening of the vagina

Background: Haematometra is a condition which results in the blockage of the female urogenital tract, leading to an accumulation of blood in the uterus. This condition is more commonly noted to present due to congenital abnormalities, such as a transverse vaginal septum, but may also be acquired later on in life following procedures performed on or within the female genital tract. As noted in the literature however, haematometra following a caesarean section is a rare, and avoidable complication, and one that will be discussed in this case report.

Case: Our patient is a 31-year-old female, para 1 gravida 1, who underwent a low transverse caesarean section delivery for a prolonged second stage of labour at another institution. She presented to us, three years after her caesarean section delivery, with severe pelvic pain and secondary amenorrhoea which resolved after vaginal excision at the apex of the vagina, and identification and dilatation of the cervix, which was covered entirely by the vaginal apex.

Conclusion: Systematic inspection of the vagina should be undertaken following a caesarean section. Haematometra following caesarean delivery, while rare, should be managed similarly to a high / transverse vaginal septum.

Haematometra, which results from a partial or complete obstruction of the lower female outflow genital tract, may be congenital or acquired (1). This rare condition, results in a pathological accumulation of blood in the uterine cavity (2). Primary, or congenital, haematometra are most commonly noted in adolescents with congenital abnormalities of the lower genital tract such as an imperforate hymen, transverse vaginal septum, and vaginal stenosis (1,3). Secondary, or acquired haematometra occur in women with normal menses prior to amenorrhoea and are usually iatrogenic following procedures performed on the female genital tract, such as dilatation and curettage, cone biopsies, endometrial ablation, or cryocoagulation (1, 4).

Other potential causes may be senile atrophy of the endocervical canal, endocervical malignancies and subsequent radiation therapy, scarring of the isthmus by synechiae (2, 4, 5). Haematometra following a caesarean section is a rare, and avoidable condition, with an unknown incidence rate (3). Management of haematometra as a result of a caesarean section, is most commonly by dilatation and evacuation of the haematometra, followed by a placement of an intrauterine catheter, thus allowing for continuous drainage (4, 6).

Our patient is a 31-year-old female, para 1 gravida 1, who underwent a low transverse caesarean section delivery for a prolonged second stage of labour at a district hospital. Theatre notes from the time, documented that she had no underlying risk factors, and that the procedure itself was uneventful. She was discharged two days post-operation. Following the delivery, she breastfed for one year, and reports no use of contraception since the operation, until the date of presentation to our institution.

She presented to us, three years after her caesarean section delivery, with severe pelvic pain, which was increasing in severity since cessation of lactation, together with secondary amenorrhoea. The patient was admitted to the original institution where she had the initial procedure, 8 weeks prior to her presentation to us, where, according to the history and notes provided, an attempt was made to drain the haematometra, without any improvement or solution. For this reason, she was referred to our urogynaecology unit at the Charlotte Maxeke Johannesburg Academic Hospital (CMJAH) for further workup and management.

On presentation, the patient described the pain as a severe pressure that was localised within the pelvis, and radiating to the lower back. The pain was not improved or relieved by emptying of the bladder or analgesics. When discussing the cessation of her menses, she reported that prior to her caesarean section, she had regular menses (28-day cycle), with bleeding on days 1-4, with minimal, if any, pain. On examination of the patient, the patient was systemically stable and healthy, with normal vitals. On more focused examination, the abdomen was noted to be soft, non-peritonitic, with a palpable mass above the symphysis pubis extending to the umbilicus; an equivalence to an 18-week-uterus. The mass was non-tender, mobile, well-circumscribed, smooth, and with no ascites noted. On pelvic examination with a speculum, a normal vulva was noted, the vagina was smooth, normal in length and calibre, but was observed to be a blunt ending vagina (no cervix was noted), but with a pinpoint in the middle of the vaginal vault, which was found to be fluctuant on digital examination.

On medical workup for the patient, blood work was found to be within normal limits, as was the urine dipstick. A transvaginal ultrasound was done, showing a distended endometrial cavity with fluid collection and a stretched myometrium. Magnetic resonance imaging (MRI) was done in order to confirm our diagnosis of haematometra, which showed a massive fluid-filled antero-verted uterus, measuring 133mm in length, with the widest endometrial stripe being 17mm. A poorly defined cervix was observed with a thin, irregular ill-defined cervical canal, which was described as being a likely stenosis/stricture or as a result of a previous gynaecological intervention. There was no obvious discernible mass lesion noted, and fluid was observed within the vaginal canal (Figure 1).

The patient was taken to theatre for examination under anaesthesia (EUA), and for definitive management of the haematometra. It was noted, that the cause of the haematometra was due to the suturing of the opening of the cervix during her previous caesarean section, done at the initial institution. This was noted as there was no communication between the vaginal vault and the cervical canal, which was also noted on her MRI. The surgical management of this patient, consisted of making a crucial incision at the level of the vaginal vault (Figure 2). The crucial incision was made once the bladder was catheterised and a Hegar dilator (number 8) was inserted into the rectum, in order to avoid further injury to either the bladder or the rectum (Figure 3). Once the crucial incision was done, the cervix was identified. The anterior lip of the cervix was grasped using a Vulsellum forceps, the cervix was then dilated with Hegar dilators (up to number 8) and drained approximately 300ml of old blood. As opposed to the placement of an intrauterine catheter, to allow for continuous drainage, as noted in some cases in the literature (4, 6), a decision was made to insert a Mirena Intra-Uterine System (IUS). This was undertaken in order to maintain the communication between the cervix and the vaginal canal, as well as for its anti-estrogenic effects, which will result in endometrial atrophy, and cessation of the menses (Figure 4). Cessation of the menses was to prevent haematometra formation, as well as per the patient’s request (prevention of pregnancy). Excess vagina was trimmed off, and the remaining vaginal edges were sutured by simple continuous suturing, in order to maintain the opening of the vagina (Figure 5).

Haematometra should be suspected in women with a history of secondary amenorrhoea with cyclical pain following a caesarean section delivery (7). Haematometra is a rare complication of a caesarean section, caused by a blockage of the genital outflow tracts in females, resulting in the pathological collection of menstrual blood in the uterus (4). It is a condition that is most commonly observed to be congenital (such as in cases of an imperforate hymen or transverse vaginal septum) but can also be acquired, most commonly with an underlying iatrogenic cause (4). Literature has shown that there are a number of associated risk factors for haematometra, including, but not limited to: placenta praevia, placenta accreta and percreta, multiple previous caesarean sections, and previous cervical operative procedures (7). Haematometra following a caesarean section may be due to the inappropriate closure of the uterus, due to poor surgical technique, or due to the stitching of the anterior and posterior uterine walls, thus creating a uterine pouch where blood may accumulate over the years, as was the case for our patient (5). Transvaginal sonography is the first imaging modality for the diagnosis of haematometra (8, 9), which, in our case showed a distended endometrial cavity with fluid collection and a stretched myometrium.

In order to confirm the diagnosis of haematometra, an MRI may be done in order to assess the uterine anatomy and level of obstruction (9, 10). An MRI may also provide information of any other associated changes, such as haematosalpinx. It allows for a more detailed evaluation of the anatomy in question, without exposing the patient to ionized radiation. In our case, the MRI was invaluable as it showed a massive fluid-filled antero-verted uterus, a poorly defined cervix with a thin, irregular ill-defined cervical canal, which was described as a result of a previous gynaecological intervention. In having a clear, detailed understanding of the patient’s anatomy, together with the patient’s risk factors in developing haematometra, a holistic and all-encompassing treatment plan may be constructed. The only identifiable risk factors in our case presented, included secondary amenorrhea, and a previous caesarean section coupled with poor surgical technique, which was done at her base district hospital. With increasing rates of caesarean section deliveries occurring on a global scale, there is an equivalent increase in rarer complications occurring such as haematometra (7). In order to reduce the risk of these complications becoming more common, we suggest some secure measures to be taken intra-operatively; It is advisable that after securing the angle of the uterine incision, a Hegar dilator (number 6 or 8) should be inserted through the cervix and then discarded. Once the communication of the uterine cavity, cervical canal, and vagina is confirmed, the uterine closure may then be performed with a single or double layer, respecting the correct approximation of the cut margins (decidua, myometrium, serosa). In doing so, the accidental closure of the cervix may be avoided. Additionally, a thorough examination of the patient at follow-up (including pelvic) should be performed to rule out any iatrogenic complications (3).

Whilst haematometra is a rare condition, it should always be a differential diagnosis in patients presenting with amenorrhoea and cyclical pain when other common causes are ruled out. The index of suspicion will be raised when there are positive findings on ultrasonography, and the patient has risk factors (for either congenital or acquired haematometra). As in our case, systematic inspection of the vagina should be undertaken following a caesarean section. Haematometra following caesarean delivery, where possible, should be managed similarly to a high / transverse vaginal septum.