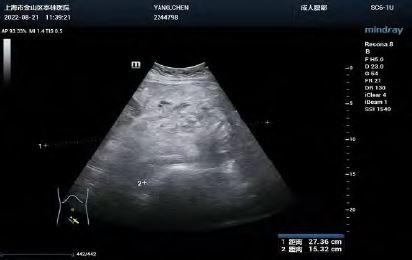 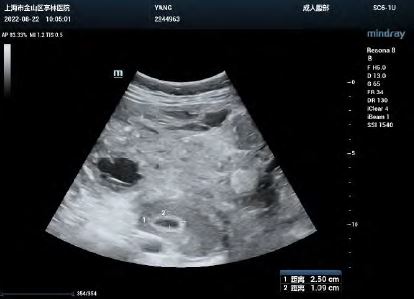 Fig 2 a-b: Ultrasound images of the pelvic mass, at the bottom of the picture the uterus is seen squeezed to posterior. The cavity is hypoechogenic 13x18x9 mm (1+-2+). No signs of an evolving pregnancy 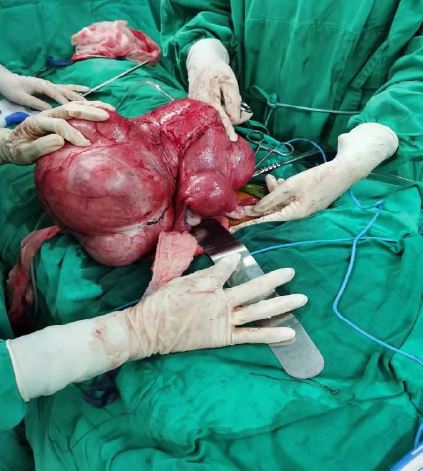 Fig 3 Peroperative image of the enlarged uterus and the huge pelvic mass. On the right the uterus and adnexa. 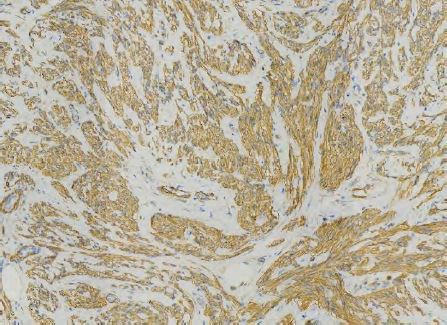 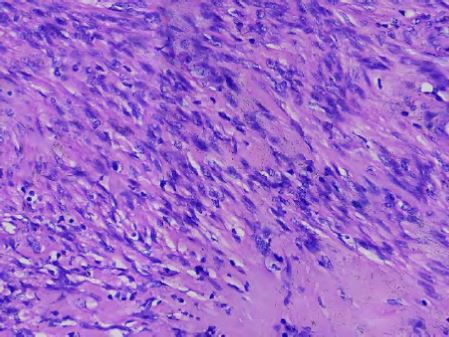 Fig 4 a and b: the different pathology staining with final diagnosis leiomyoma

Case history: The patient was admitted to the hospital with a complaint of: menstruation being retarded for 50 days and a painless pelvic mass palpated by the patients some nine days before admittance. Since some four months the patient occasionally experienced a bloated feeling. However, she did dismiss the feeling and did not seek for treatment.

Uterine body: difficult to palpate; Pelvis: palpable huge lump, upper edge of the lump is located three fingers under the xiphoid sternum, irregular in shape, no tenderness. The final diagnosis made is one of a huge uterine fibroid with pregnancy.
The postoperative pathology diagnoses the giant lump as a leiomyoma according to immunohistochemical results. Immunohistochemical report: CD10 (+), desmin (+) SMA (+), CD117 (-), NSE (-), S – 100 (-), Caldesmon (+), Ki – 67 (+ 2%), Vim (+) and CD34 + (blood vessels).

Fibroids are the most common benign tumors of the reproductive organs in women of childbearing age. Among these, the overall prevalence of uterine fibroids in pregnancy is about 0.3% (1). Huge gestational fibroids like the reported one are even rarer, most fibroids during pregnancy are asymptomatic and their size may change, but these changes vary from person to person. Most fibroids stop growing or shrink during the puerperium. The effect of fibroids on pregnancy depends on their number, size and location. Multiple fibroids or isthmic fibroids increase the probability of caesarean delivery (2). Therefore, it is necessary to carry out regular screening ultrasound scans before and during the pregnancy to diagnose and prevent possible fibroid related obstetric complications. The most common complication is red degeneration or myoma enlargement. The location can have a special effect the progression of labor. The patient reported had a delayed menstruation, she did feel abdominal discomfort and a huge mass was found, indicating that fibroids grow rapidly. In this case this is related to the patient’s lacking routine examination before and during the pregnancy.

The patient was admitted to the hospital with a complaint of: menstruation being retarded for 50 days and a painless pelvic mass palpated by the patients some nine days before admittance. Since some four months the patient occasionally experienced a bloated feeling. However, she did dismiss the feeling and did not seek for treatment.

A pregnancy test was positive. Doppler enhanced ultrasound examination after admission did reveal: an echo poor structure in the uterine cavity 13x18x9 mm, no obvious fetal shadow or yolk sac. A huge echo dense area is revealed in the abdominal cavity, measuring 275x155x273 mm, the outline is still clearly visible, the internal echoes are heterogeneous, blood flow signals are visible in the periphery, and there is no obvious boundary with the anterior wall of the uterus.

Uterine body: difficult to palpate; Pelvis: palpable huge lump, upper edge of the lump is located three fingers under the xiphoid sternum, irregular in shape, no tenderness. The initial diagnosis made is one of a huge pelvic fibroid equaling the size of a first trimester pregnancy. In view of the extension of the abdominal mass open abdomen surgery is decided upon to confirm the preoperative examination and diagnosis. At the start of the abdominal exploration no ascites is seen. The abdomen is flushed with 50ML of peritoneal irrigation solution and sent for pathology, no tumor cells were seen. The lower border of the tumor is close to the bladder, the upper border reaches up to the umbilicus, the left border is close to the pelvic wall, by palpation the uterus feels like a 7 weeks gestation. The uterus is squeezed by the tumor into the right pelvic lateral fossa, both ovaries are normal, the capsula of the mass is opened and gradually separated, it is noted that the lump originates at the level of the anterior isthmus of the uterus extending towards the cervical canal and the left broad ligament, the blood supply is abundant, the lump is removed and weighs 4500g with a diameter 28 cm. The intraoperative bleeding is 300ml, and the surgery progresses smoothly.

Uterine fibroids have been reported to grow significantly in early pregnancy and then shrink or stop growing in the third trimester (3). Most women with uterine fibroids have an uncomplicated pregnancy (4). If fibroids do not give rise to symptoms and do not affect embryonic development, they can be followed up. For patients with fibroids affecting embryonic development or fibroid degeneration, symptomatic treatment such as antipyretic analgesia can be given, if conservative treatment is ineffective, myomectomy has to be performed. The best timing is the second trimester, because at that time the risk of miscarriage is relatively low. The risk of miscarriage after myomectomy has been reported in the literature to be between 18% to 35% (5). In the case reported, the uterus is squeezed by the large tumor, resulting in insufficient space for embryo development, resulting in no fetal heartbeat on ultrasound. Although didrogesterone is given before and after surgery to protect the fetus, the outcome is not that good. The patient reported had a feeling of abdominal distension and after diagnostic tests revealed not to be suitable for a continuing expectant management. The patient and family were informed of the risks of surgery before surgery, and the patient did give her consent for an abdominal myomectomy. According to the literature, there is no significant difference in the effect of laparoscopic and transabdominal myomectomy on pregnancy and fertility. Therefore, in the second trimester, minimally invasive surgery is the recommended method because of its advantages in the patient’s postoperative recovery (6). In order to reduce the impact on the fetus, it is recommended to administer medication before and after surgery to prevent pregnancy loss (didrogesterone, progesterone injection, magnesium sulfate, ), and adapt the duration of the medication according to the clinical symptoms, blood HCG and progesterone measurements and ultrasound findings.

For patients with uterine fibroids in the third trimester of pregnancy, there is no unified conclusion on whether to remove fibroids during cesarean section, some researchers believe that the removal of uterine fibroids at the same time by cesarean section can easily lead to an increased probability of postpartum hemorrhage. Therefore, myomectomy should be carried out with caution, subject to strict selection of surgery indications, and performed by experienced physicians, the incidence of uterine rupture in subsequent delivery is < 1% (7), and vaginal delivery is encouraged unless fibroids block the exit of the birth canal or cause persistent abnormal fetal positioning.

Especially in the first trimester of pregnancy there are not many literature reports nor on experience nor on treatment methods. Therefore, prevention becomes even more important. For women who are planning to become pregnant. The impact of the size, the location, and the nature of the fibroids on a future pregnancy should be carefully evaluated after examination of the fibroids. In our institution classification is done according to the following three categories:

1> Subserosal uterine fibroids: subserosalfibroids are related to a decrease in implantation rate, clinical pregnancy rate and an increase in miscarriage rate. It can be expected that fibroids of less than 3cm, with no compression, degeneration nor torsion, allow, generally, a normal pregnancy.

2> Myometrial fibroids exceeding a certainsize >5 cm, even without deformation of the uterine cavity, may negatively affect fertility (8). Regardless of whether these interfere with menstruation. It is recommended to try pregnancy after surgical resection. Pregnancy is recommended one year after surgery to reduce the occurrence of uterine rupture.

3> Submucosal fibroids can negativelyaffect fertility and can cause abnormal uterine bleeding, uterine infection, anemia and eventually other symptoms. For submucous fibroids or endometrial polyps ≥ 1cm, hysteroscopic resection is recommended before pregnancy (9), The surgeon has to pay attention to protect the normal endometrium during surgery. Pregnancy can be tried 1 month after endometrial polyp removal and 3 months after submucous fibroid surgery, if ultrasound examination and menstruation are normal.

The biggest difficulty in the case reported is that the duration of the gestation is still short, the fibroids are huge and symptomatic. Here the question is: how to remove fibroids in the most beneficial way for the patient. The patient already has abdominal distension and discomfort, and continued observation will cause worsening of symptoms, so surgery is indicated. Due to the special position of the uterus. The policy adopted consisted in first the removal of the fibroids followed by medical abortion. Safe removal of fibroids trying to preserve embryos is related to many aspects, not only related to the size, location and nature of fibroids, but also closely related to the development of the embryo itself.

Acknowledgment: The authors thank Bruno J van Herendael for his positive criticism and help during the writing.