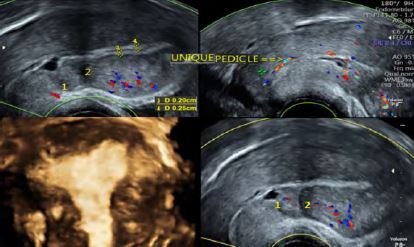 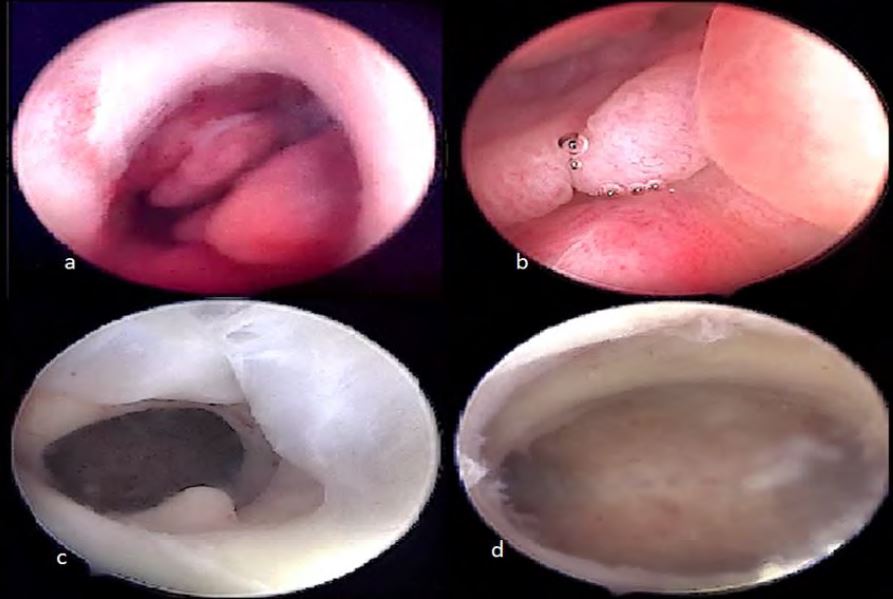 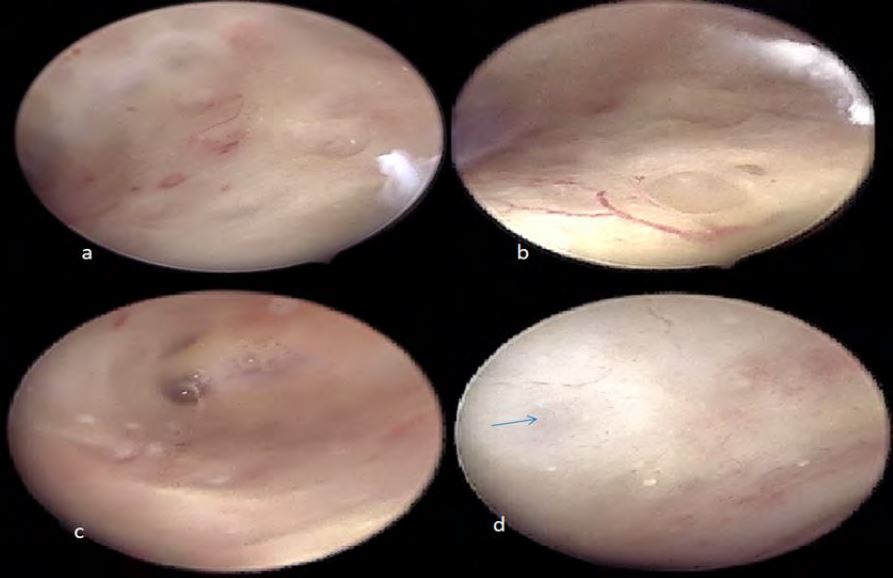 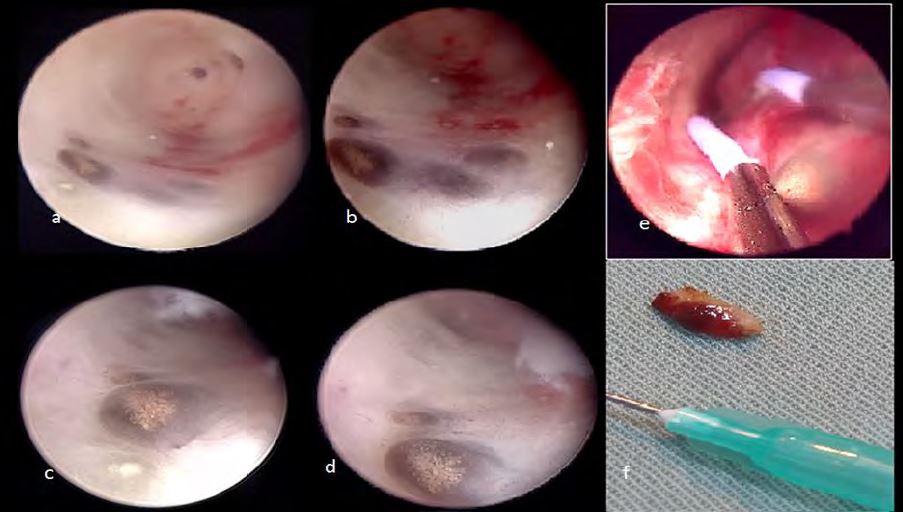 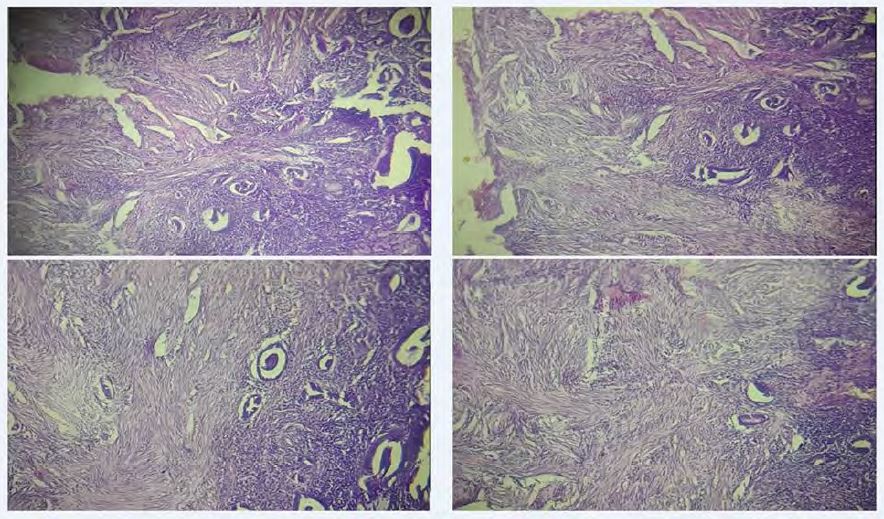 Figure 5: histopathological examination: atrophic endometrium with the presence of endometrial glands and stroma within the underlying myometrium.

Study Objective: to demonstrate a new hysteroscopic pattern for adenomyosis supported by histopathologic examination.
Design: A didactic description of the hysteroscopic sign and the diagnostic steps through a case report.
Setting: A private clinic in Algiers, Algeria.
Case description: 57-year-old, gravida 6 para 6 patient, with a history of 2 cesarean sections, recurrent urinary infections and a recent asymptomatic COVID-19 incidentally discovered at systematic blood tests. The patient presented with post-menopausal uterine bleeding. Ultrasound revealed an anteverted adenomyotic uterus with two distinct scars, a Doppler-free irregularly thick endometrial stripe and a unique vascular pedicle in the cervical canal arousing suspicion of endocervical polyp.
Intervention: Hysteroscopy revealed four small endocervical polyps, two uterine scar niches and a small isthmic millimetric polyp in the posterior wall of the distal isthmocele. The uterine cavity is triangular, with an arcuate fundus. The endometrium is atrophic and inflammatory in places, with numerous mucosal defects suggesting adenomyosis, diffuse throughout the entire cavity. At the right posterior-lateral edge, bluish circular lesions are seen with fine yellowish gold-like dots distributed on the surface. The latter was sampled and sent in a separate container to the pathologist.
Main result: Histological exam confirmed simple endocervical and endometrial polyps, as well as adenomyosis for the unusual dotted pattern.
Conclusion: Adenomyosis can present in different patterns at hysteroscopy. To our best knowledge, this is the first case demonstrating an additional sign for adenomyosis presenting as bluish lesions with a fine yellowish gold-like punctuation.

Although stronger levels of evidence remain necessary, many authors agree on the significance of some endometrial signs as indicators of adenomyosis at diagnostic hysteroscopy: cystic hemorrhagic lesions displaying a dark blue or a chocolate brown appearance, irregular endometrial surface with focal defects, increased vascularization and fibrous cystic appearance of intrauterine lesions (1,2).

In addition to allowing direct visualization of the endometrial lesions, hysteroscopy also provides the possibility of visually-guided sampling for a proper histopathologic examination. In this article, we report circular bluish lesions with a fine yellowish gold-like punctuation at the surface.

We report the case of a 57-year-old, gravida 6 para 6 patient, with a history of two caesarean sections, recurrent urinary infections and a recent asymptomatic COVID-19 incidentally discovered at systematic blood tests. The patient, menopaused at age 51, presented for post-menopausal uterine bleeding, with no additional symptoms or signs at physical examination. Transvaginal ultrasound revealed an anteverted anteflected adenomyotic uterus –in accordance with the recent diagnostic criteria for adenomyosis (3) – with two visualized uterine scars. The endometrial stripe was irregularly thick but remained within normal limits and did not exceed 4.5 mm of thickness. There was a thin layer of intra-cavitary fluid. At Doppler, a constant endocervical vascular pedicle was observed and aroused suspicion of an endocervical polyp (Fig 1).

Diagnostic hysteroscopy was performed through vaginoscopic route with a 5mm continuous flow office hysteroscope, 30° scope of 2.9mm diameter and revealed four small mucous-appearing endocervical polyps and two uterine scar niches: the distal was bigger with Nabothian cysts in its distal edge; the proximal one was smaller without inflammatory signs. A small millimetric simple-appearing endometrial polyp was observed in the posterior wall of the distal iche (Fig2).

Moreover, the uterine cavity was triangular with a slightly arcuate porous fundus. The endometrial mucosa was atrophic and inflammatory in places, with numerous mucosal defects suggesting adenomyosis, diffuse throughout the entire cavity. Another observed sign of adenomyosis was the presence of increased vascularity and fibrous cystic appearance of intrauterine lesions (Fig3).

At the right posterior-lateral edge, near the tubal ostium, bluish circular lesions were seen with fine yellowish gold-like dots distributed on the surface with a discrete hypervasularity surrounding them (Fig 4).
With the semi-circular loop of an 18.5 F bipolar 12° miniresectoscope and without cervical dilatation, all the polyps were removed. The unusual dotted bluish lesions were also resected until the endomyometrial layer and sent in a separate container to the pathologist.

Histopathologic examination confirmed the benign nature of all the removed endocervical and endometrial polyps, as well as adenomyosis for the unusual dotted pattern, defined by the presence of both endometrial glands and stroma in the underlying myometrium (Fig 5). There was no histopathologic explanation for the yellowish dots however, although the possibility of lipid deposits could not be ruled out.

Adenomyosis is a benign condition where endometrial glands and/or stroma are present within the myometrium. Heavy menstrual bleeding, pelvic pain, subfertility, and a higher risk of miscarriage/obstetrical complications are the most common symptoms although two in three patients are asymptomatic (4). Moreover, it is one of the entities of the PALM-COEIN FIGO classification of abnormal uterine bleeding (Polyp; Adenomyosis; Leiomyoma; Malignancy and hyperplasia; Coagulopathy; Ovulatory dysfunction; Endometrial; Iatrogenic; and Not yet classified – International Federation of Gynecology and Obstetrics).

Adenomyosis, defined as the presence of functional endometrial glands/stroma within the myometrium, is distinct from endometriosis, as the latter is defined by the presence of functional endometrial glands/stroma outside of the uterus. However, their association is often reported, also with other gynecological benign conditions, such as uterine fibroids (4,5).

In terms of pathogenesis, despite the condition being not yet fully elucidated, there is an increasing amount of studies highlighting the role of sex steroid hormone receptors, inflammatory molecules, extracellular matrix enzymes, growth factors, and neuroangiogenic factors in the genesis of adenomyosis (5).

Although it is classically considered as the condition of the over 40 years old multiparous woman, the epidemiological data increasingly report adenomyosis in young symptomatic and/or asymptomatic women by using imaging techniques such as transvaginal ultrasound and magnetic resonance imaging (MRI) (3,4). However, there is no agreement on the definition and classification of adenomyotic lesions from both the histopathology and the imaging point of view. A classical histological definition for adenomyosis consists of the invasion of the myometrium by functional endometrial glands and/or stroma, deeper than 2.5 mm from the endometrial–myometrial junction, accompanied by adjacent smooth muscle hyperplasia (6). Meanwhile, other heterogeneous histopathological definitions coexist, ranging from the simple disruption of the endometrial–myometrial junction to a more than 8 mm invasion-depth of adenomyotic tissue.

Thanks to the progress of imaging techniques, adenomyosis is progressively moving from a histological diagnosis to an ultrasonographic entity that could also be diagnosed by ultrasound and MRI (3,6).
Hysteroscopic examination of the endometrial mucosa allows visualization of subtle changes which are suggestive of adenomyosis although the pathological value is still to be proven. Among the significant signs, but still not pathognomonic: hyper-vascularization, irregular endometrial surface with focal defects, submucosal hemorrhagic cysts displaying a dark blue or a chocolate brown appearance and fibrous cystic appearance of intrauterine lesions (1,2,6) (Fig 3). All these signs were documented in our patient. Another described sign for adenomyosis is the strawberry pattern (2,6): a reddish area punctuated with irregularly spaced white dots, which is already known as a sign for chronic endometritis (CE) (7). However, CE as currently defined, is a problematic entity which we have already addressed in previous works, as it does not acknowledge the physiological chronic inflammation of normal endometrium, neither does it acknowledge the role of factors other than germs in causing the disorder (8). This is the reason why a more convenient terminology was proposed to name inflammatory disorders of the endometrium, which is Impaired Inflammatory State of the Endometrium (IISE) (8). The strawberry pattern is one of the signs for chronic IISE as it reflects a variable hypotrophy of the interglandular stroma, causing the underlying vascular network to be more visible (explaining the red color) and also explaining the irregular distance between glandular orifices (the white dots) (7,9). Moreover, in a recently published work, the impact of ectopic endometrium on the eutopic one was stressed and consistent data do reveal the role of endometriosis in causing increased intrauterine endometrial inflammation (10). Hyperemia and strawberry pattern were observed in our patient near the bluish cysts as well as the yellow-punctuated ones.

Histological examination of hysterectomy specimens has been the gold standard to make the final diagnosis of adenomyosis. Hysteroscopic exploration of the sub endometrial myometrium provides the opportunity to make the histopathologic diagnosis of the disease without hysterectomy (6). Consequently, the sampling is ideally performed using a resectoscope (or a miniresectoscope) allowing the resection of the endomyometrial layer beneath the lesion. In order to obtain an adequate biopsy with this approach, some authors advocate performing first a resection of a superficial specimen including both the endometrium and the underlying myometrium layer and then a second biopsy deeper into the dent left behind by the first resection, including only myometrial tissue (2). It is of utmost importance to respect all the precautions inherent to a good quality sampling for interpretation by pathologists (11). In our patient, the endometrial atrophy has allowed to sample a sufficient amount of underlying myometrium at one resection (Fig 4). Our iconography illustrates a good correlation between ultrasound, hysteroscopy and histopathology. Meanwhile, the coexistence of scar niches, endometrial polyp and intracavitary fluid can be considered as interfering factors, potentially impacting the hysteroscopic appearance of adenomyosis. Consequently, further observations are needed.

In our practice of hysteroscopy, a number of patterns are suggestive of adenomyosis, despite the need for stronger histopathological evidence. The lack of consensual diagnostic criteria, as well as the interobserver variation even between experts are part of the factors making it difficult to interpret the findings from the different available studies. To our best knowledge, this is the first case providing an additional sign for adenomyosis, presenting as bluish lesions with a fine yellowish gold-like punctuation, and proven by histopathology. Further studies are needed to determine the specificity and sensitivity of this hysteroscopic pattern.