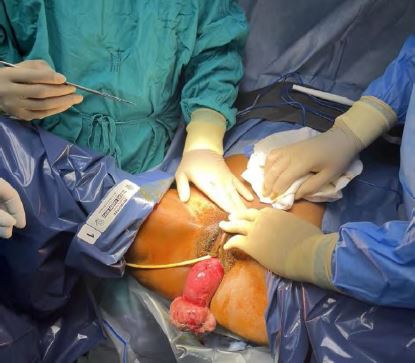 Figure 1: Complete inversion of the uterus with submucosal fibroid protruding through the vagina 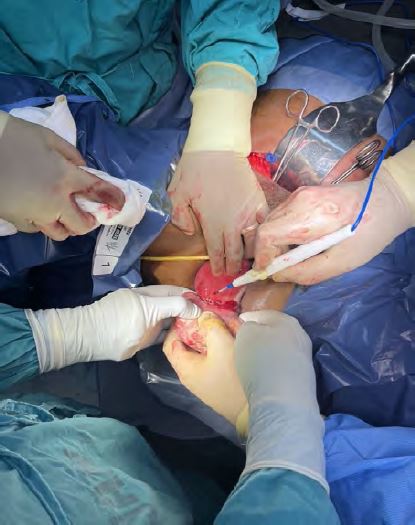 Figure 2: Electrocautery of the submucosal fibroid. 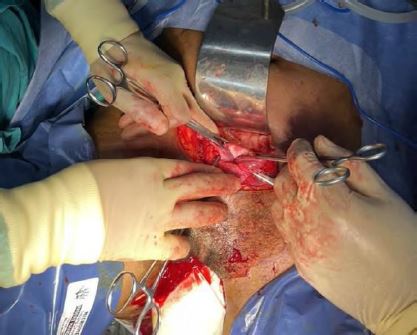 Figure 3: Posterior uterine ring and the “flower vase” appearance of the fallopian tubes and ovarian ligaments with no uterus in the pelvis 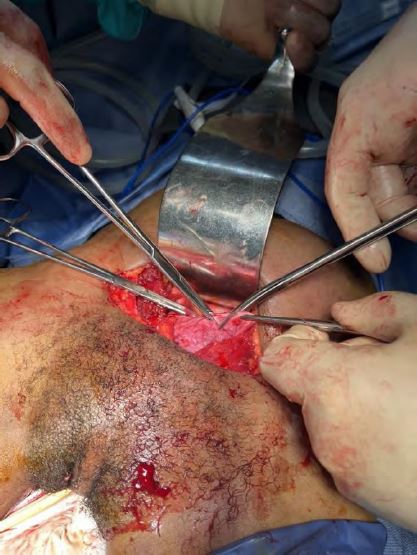 Figure 4: Clamping of the round ligaments bilaterally. 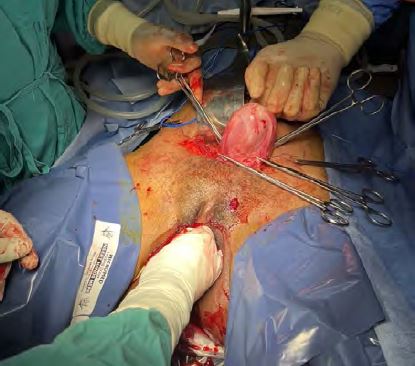 Figure 6: Uterus pushed back into its anatomical position.

Introduction: Inversion of the non- pregnant uterus is a rare condition. Its usual presentation is as an obstetric emergency during the removal of the placenta, and is easily diagnosed and managed. In contrast, a Non-Puerperal Uterine Inversion (NPUI) may be difficult to diagnose due to the delay in its presentation; once presented, there is a general lack of awareness in reaching a diagnosis, which may also pose a surgical challenge in management.

Case report: A 33-year-old woman, para 3 gravida 3, was referred from a local clinic to the Charlotte Maxeke Johannesburg Academic Hospital (CMJAH) with a history of a mass protruding through the vagina for one week. The patient was admitted to the Oncology Unit as a suspected Mixed Mullerian Tumour (MMT) or sarcoma and a biopsy of the mass was subsequently performed.
Histology revealed the presence of smooth muscle surrounded by inflamed granulation tissue, which lead to the diagnosis of a submucosal fibroid. The patient was referred to the Urogynaecology Unit for definitive surgical management.

Management: A combined abdominal-vaginal reposition of the uterus followed by a total abdominal hysterectomy (TAH) was performed. First, the submucosal fibroid was excised while the uterus was still inverted. A Pfannenstiel incision was performed, and the cervical ring and the posterior uterine wall was incised. The uterus was reduced into the normal position in the abdominal cavity. Routine TAH was performed as the patient had completed her family. Postoperative management was uneventful.

Conclusion: This case outlines the importance of early diagnosis and management of uterine inversion and intends to increase awareness amongst general practitioners, as early referral is paramount in the management of these patients.

Uterine inversion is a rare condition, which most commonly presents as an obstetric emergency. Puerperal uterine inversion is a rare complication of delivery with an incidence of ranging from 1 in 3500 to 20,000 deliveries in the United States1. It is usually associated with excessive umbilical cord traction during the removal of the placenta and is more common in patients with an atonic uterus, or patients with a fundal implanted and morbidly adherent placenta2,3. The diagnosis is made with relative ease and is subsequently managed during the third stage of labour.

In contrast, Non-Puerperal Uterine Inversion (NPUI) is more difficult to diagnose. This is mainly due to the delay in presentation; once presented, there is a lack of awareness to reach the diagnosis. Failing to diagnose on time may have catastrophic consequences. NPUI is almost always associated with benign uterine tumors, with submucosal leiomyomas considered to be the most frequent cause. Malignant conditions are occasionally associated4.

The incidence of NPUI is not known, however, a systematic review done by Rosa Silva et al. noted a total of 170 case reports in 20185, with the majority of cases being associated with uterine fibroids. We describe the case of a 33-year-old woman who presented with a large mass protruding through the vagina and the surgical technique applied to reinvert the uterus.

A 33- year-old woman, para 3 gravida 3, whom had completed her family, was referred by the local clinic to Charlotte Maxeke Johannesburg Academic Hospital (CMJAH) with a one-week history of a large mass protruding through the vagina and associated lower abdominal pain. Additionally, she reported that the expulsion of this mass was accompanied with acute onset severe lower abdominal pain, but without bleeding, and subsequent foul-smelling vaginal discharge in the days that followed. Further review of her history revealed a previous diagnosis of uterine fibroids without follow-up for management. Records were unavailable for review.

On examination, she was found to be stable, with a blood pressure of 114/70mmHg, a pulse rate of 92 beats per minute, with a body temperature of 36,8’C and a respiratory rate of 18 breaths per minute. General examination of her systems was unremarkable. On specific local examination, a mass of approximately 10x8cm was noted, with an irregular border and areas of bleeding and necrosis (Figure 1). On abdominal-pelvic and rectal examination, the uterus could not be palpated in the pelvis. Additionally, the cervix could neither be seen nor palpated.

Following the findings noted on examination, a transabdominal ultrasound was performed. Transabdominal ultrasonography could not identify the uterus in the pelvis cavity and there were no adnexal masses or ascites noted. Blood results revealed a mild anemia with a hemoglobin of 9,8g/dL, a white cell count of 7,97 x 10^9/L and a normal renal function.
The patient was subsequently admitted to the Gynecology Oncology Unit as a suspected Mixed Mullerian Tumor (MMT) or sarcoma, and a biopsy was performed. Histopathological diagnosis revealed smooth muscle surrounded by inflamed granulation tissue, suggestive of a leiomyoma. There was no severe atypia or malignant features within the submitted tissue.

Following these findings, the patient was then referred to the Urogynecology Unit for further surgical management.
The patient was consented for surgery with a tentative diagnosis of NPUI due to submucosal fibroid. Considering the age of the patient, and the fact that the patient had revealed that her family was complete and thus fertility was no longer desired, a decision for a TAH with conservation of the ovaries was taken. A combined abdominal and vaginal approach was planned. Prior to commencing with the surgery in the operating theatre, examination under anesthesia was done and a tight cervical ring was identified behind the mass. First, the submucosal fibroid was excised to reduce the volume of the mass protruding through the vagina (Figure 2).

A Pfannenstiel incision was performed and routine abdominal entry revealed the classic “flower vase” appearance (Figure 3) of the ovarian ligaments, fallopian tubes and round ligaments, as they were pulled down by the uterine fundus. Attempt to reposition the uterus abdominally by applying tension on both round ligaments (Huntington procedure) failed. At this stage both the round ligaments were clamped, cut and ligated bilaterally (Figure 4).

Next, the firm posterior surface of the cervical constriction ring and part of the posterior uterine wall was incised with electrocautery (Figure 5), whilst applying gentle upwards pressure vaginally (Haultain procedure). The uterus was subsequently reinverted to its normal anatomy by placing a finger abdominally through the myometrial incision and exerting pressure on the fundus (Figure 6).
Finally, a TAH was performed. Postoperative management was uneventful and the patient was discharged home on day 3. Follow-up was planned for six weeks post-operatively and the patient had no complaints.

Chronic uterine inversion or NPUI is a condition in which the uterus turns inside-out with prolapse of the fundus through the cervix. It is a rare complication2 and is usually precipitated by a large submucosal fundal fibroid. The condition will typically present in a multiparous woman with a history of leiomyomas with a painful mass protruding through the vagina. Risk factors for NPUI include thin uterine walls, multiparity, rapid growth of the fibroid, large size and fundal location3. The two treatment options available are hysterectomy or repositioning and repair of the uterus. The factors which need to be considered while planning the surgery are whether the mass is benign or malignant, how easily the uterus can be reduced, and the need for fertility preservation.

The pathophysiology is poorly understood but it is suggested that the distension of the myometrium due to the enlarged tumor irritates the muscle cells of the uterus, thus initiating contractions which can result in dilatation of the cervix, resulting in the expulsion of the tumor and pulling the uterine fundus down with it.

Uterine inversion is classified as incomplete, complete and total inversion and is described in stages 1 to 46. In stage 1, the inverted uterus remains in the uterine cavity. Stage two describes the complete inversion of the fundus through the cervix. To be classified as stage three, the inverted fundus will protrude through vulva. Finally, in stage 4, there is total inversion of the uterus and the vaginal wall through the vulva. While stage 1 inversion will often offer easy repositioning of the fundus, inversions in stages 2-4 are likely to be more demanding. The case presented in this case report was one of stage 4 total uterine inversion. The diagnosis was based, as first described by Lascarides6, on the fact that the cervical ring was not recognizable along the proximal part of the mass. Additionally, there was no cervical opening identifiable along the distal part of the mass, and, during bimanual rectal and abdominal examination, the uterus was not palpable or within its normal position in the pelvic cavity. Sometimes similar clinical findings can be found in cases of enlarged sub-mucous fibroid protruding through the cervix, which is why ultrasonography is an important investigation to be conducted prior to surgical intervention. In this case, the transabdominal ultrasound revealed the absence of the uterus within pelvic cavity and confirmed the diagnosis of complete uterine inversion.

The Huntington and Haultain procedures9 are done trans-abdominally, either open or laparoscopically. In the Huntington procedure, a clamp, such as an Allis or Babcock, is placed on each round ligament with gentle upward traction, moving the clamps until the inversion is corrected. This is less invasive and does not involve incising the uterus. This was attempted initially in our case, but was unfortunately unsuccessful. We then proceeded with the Haultain procedure9 by entering the abdomen with a Pfannenstiel incision. Incision of the posterior aspect of the vaginal-cervical ring with the posterior wall of the uterus to facilitate the inverted uterus to be reinverted to its normal anatomy (Figures 5 and 6).

Although vaginal methods are well described in the literature, the abdominal route is preferred as it allows for better visualization of the anatomy and has fewer complications associated with it10. This is the technique that is routinely performed in our unit irrespective of whether the uterus is to be removed or uterine preservation is desired. Bladder and ureter injuries are known complications of hysterectomies when performed vaginally, and the inverted uterus makes the surgery all the more technically difficult.

Operating without repositioning of the prolapsed uterus should be considered in patients with previous pelvic surgery as the proximity of the ureters to the ovarian and uterine vessels due to traction on the vascular pedicles may lead to ureter injury10. Reflecting the bladder down is more difficult while the uterus is inverted and may inadvertently lead to a bladder injury11.

This case highlights the importance of the surgeon being comfortable with the diagnosis and management of the NPUI. A combined vaginal and abdominal surgical approach can facilitate repositioning and/or hysterectomy when there is a large protruding vaginal mass.

Chronic non-puerperal uterine inversion is uncommon. Its presence should be suspected when a larger prolapsed fibroid is encountered. Biopsy of the mass is mandatory to excluded malignancy. This case report intends to increase awareness amongst general practitioners, as early referral is crucial in the management of these patients.