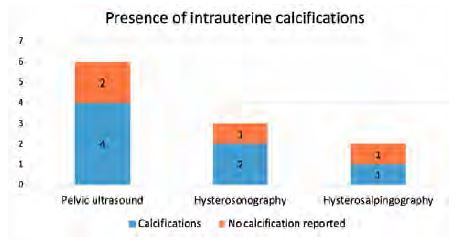 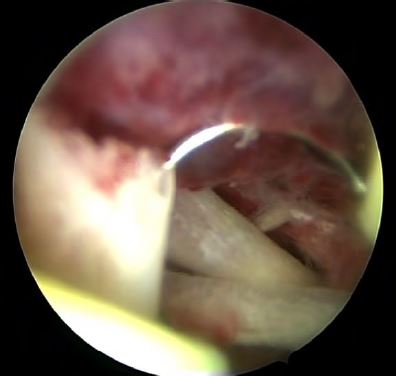 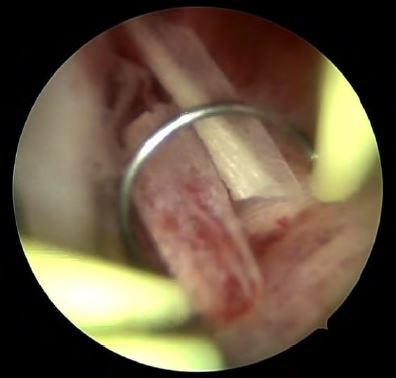 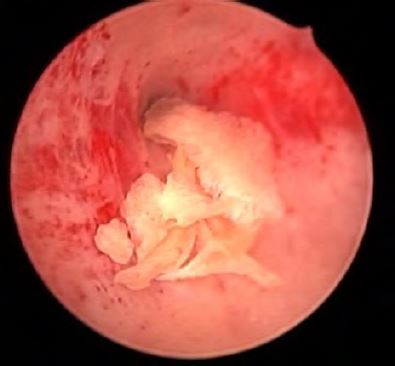 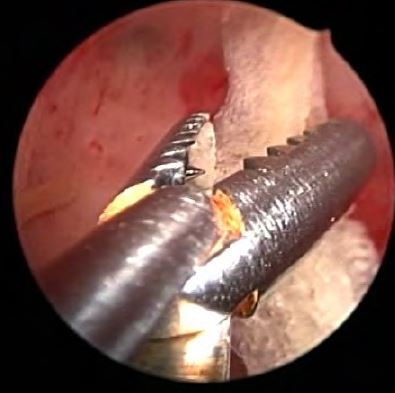 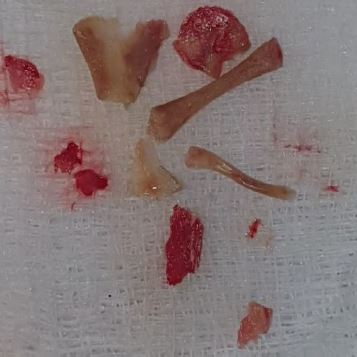 Fig 6: Bones retrieved during a procedure

Introduction: The presence of intrauterine bone structures during hysteroscopy is an unusual finding.

Materials and methods: We carried out a retrospective descriptive study at the Centre Hospitalier de Recherche et d’Application en Chirurgie Endoscopique et Reproduction Humaine (CHRACERH) between September first 2017 to August 31st 2022. The CHRACERH is a public facility addressing infertility and dedicated to minimally invasive surgery in Yaoundé – Cameroon. All procedures of hysteroscopy performed in theatre were reviewed. All cases of patients reporting the presence of intrauterine bones during the procedure were processed.

Results: Six cases of intrauterine bone structures have been identified out of 854 hysteroscopies. The prevalence over the five-year period was 0,7%. The mean age of patients was 35.2 years. All patients revealed a past history of mid trimester abortion. For one patient, the history of abortion was confessed retrospectively after the diagnosis of retained bony fragments. A past history of Sexually Transmitted Infection (STI) was recorded for three patients (50%). The clinical symptoms included infertility in all patients (100%), lower abdominal pain in three (50%) and oligomenorrhoea in two (33.3%). Routine work-up identified the presence of intra uterine calcifications in five patients (83.3%). In one case, the finding of bone structure was unexpected. The hysteroscopic procedure permitted the complete retrieval of all bone fragments. There were no complications.

Conclusion: The prevalence of intra uterine bone findings during hysteroscopy at CHRACERH was 0.7%. All patients complained of infertility and recorded a past history of mid trimester abortion. Hysteroscopy permitted a successful and safe retrieval of all bone fragments.

The presence of foreign bodies such as bone structures within the uterine cavity is an uncommon hysteroscopic finding. The incidence of bone retention among women undergoing diagnostic hysteroscopy is 0.15% (1). Bone fragments account to 11.9% of foreign bodies removed from uterus by hysteroscopy in infertile patients (2). In the literature, there are two types of bone structures within the uterine cavity: the retention of foetal bones and the osseous metaplasia of endometrium.

Many theories can explain the presence of intra uterine bones structures. Foetal bone retention has been associated with uterine retention of foetal bones secondary to an incomplete second trimester abortion. Another theory is related to stromal mesenchymal cells graft from foetal origin, which can differentiate into osteoblasts after termination of pregnancy, via cytokines and growth factors. The last theory is true osseous metaplasia of endometrial cells into osteoblast cells in response to chronic inflammation or trauma, similar to that occurring after calcification of fibrosis or abscesses (3-6).

Patients usually have no specific symptoms. Case reports have highlighted infertility, abnormal uterine bleeding, lower abdominal pain, dyspareunia, dysmenorrhoea, vaginal discharge and spontaneous passage of bone fragments in menstrual blood as major symptoms (2,6).
The main objective of this study was to determine the frequency and clinical presentation of intrauterine bone findings among women attending hysteroscopy at the CHRACERH.

A retrospective descriptive study was carried out at the CHRACERH between September first 2017 to August 31st 2022.
The files of all women who underwent diagnostic or operative hysteroscopy were reviewed. The patients presenting intrauterine bony findings during the procedure were identified.

Data from medical files and reports were collected, including past medical history, presenting symptoms, pelvic ultrasound and radiological findings, surgical procedure data and postoperative follow up.

Written signed consent was obtained from all patients before the surgery. Confidentiality was guaranteed during the whole procedure. Approval from the ethic committee board was not sought because of the descriptive nature of the study and no patient was subjected to any other interventions.

During the period of the study, 854 hysteroscopies were performed. Among these six cases of intrauterine bony retention were identified a frequencyof 0.7%.

A past history of STI was recorded in three cases (50%). Mycoplasma infection in two cases (33.3%) and chlamydial infection in one case (16.6%).
On clinical presentation (Fig 1), all patients complained of infertility; average duration of 6.3 years (range 2-12 years). Chronic lower abdominal pain was identified in three cases (50%) and oligomenorrhoea in two cases (33.3%).

The presence of endometrial calcifications was recorded in four cases (66.7%) out of six pelvic ultrasounds, in two cases (66.7%) out of three hysterosonographies and in one case (50%) out of two hysterosalpingography, alongside with nonspecific findings such as fibroids and polyps (Fig 2). It should be noted that in one case, no intrauterine abnormality, other than calcified intramural fibroids, was found at routine scanning.

Complete hysteroscopic retrieval of bony fragments was achieved in all cases. However, one patient needed two procedures to reach that goal. The average number of bone fragments was 8 (range 6-20). These were recognizable long and flat bones with nearly intact morphology. In one case however, a coral-like bone was described. During the procedure as well, stage 1 synechia was observed and treated in two cases (33.3%).

The postoperative follow-up was unremarkable. All patients resumed menses with normal volume during the next menstrual cycle and the ultrasound, performed in all patients, after one month was normal.
Pathological analysis of the endometrial specimen was carried out in three patients and reported a chronic endometritis with calcification. No DNA analysis was done.

The incidence rates of retained intrauterine foetal bones found by Makris et al and Gainder et al were respectively 0.15% and 0.28% (1,7). A higher incidence of 0.7% was revealed in the actual CHRACERH study. Gainder et al reported a past history of first and second trimester abortion in five and 13 cases respectively out of 18 (7). In the literature, foetal bone retention has been diagnosed between eight weeks to 19 years after the termination of pregnancy (2,8). The CHRACERH study suggests that all patients had a past history of mid trimester abortion with surgical approach between three to 16 years and two patients (33.3%) had a history of three previous mid trimester abortions. One patient did not even mention the history of abortion until after hysteroscopy was performed. The reason being the legal settings, as in some developing countries, abortion is prohibited. This leads to almost all abortions being performed illegally. There has be a number of undiagnosed women with this condition in the these communities. Therefore, it is expected that a higher incidence of intrauterine retained bone fragments could be revealed by improving hysteroscopic practice. Physicians should keep in mind the remote possibility of a forgotten abortion while assessing infertility in our settings.

Xiao et al emphasized on the need of a systematic B-ultrasound examination, to ensure the emptiness of the uterus in case of termination of a pregnancy older than 12 weeks (9).

Gainder et al found that the main symptoms were menorrhagia (five cases), hypo/amenorrhoea (two cases), metrorrhagia (four cases) and chronic pelvic pain (two cases). He reported an incidental diagnosis of foetal bone in 12/18 patients (7). Van Den Bosch et al suggested that the presence of intramural bone does not impair fertility (10). Makris et al reported irregular vaginal bleeding as main complain of patients in his study (1). Recurrent vaginitis and pelvic inflammatory disease may be rare presentations of foetal bone retention (2). The CHRACERH study outlined infertility, lower abdominal pain and oligomenorrhoea as part of the clinical symptoms in 100%, 50% and 33% respectively. The fact that the CHRACERH is dedicated to infertility can explain that all the patients complained of infertility.

Retained foetal bones are supposed to act the same way as an intrauterine contraceptive device by increasing the production of menstrual prostaglandin E and prostacyclin. Increased level of prostaglandin E may also be associated with pelvic pain and dysmenorrhoea (2,8). It has been demonstrated that prostaglandin E2 concentrations decreased by 50% after removal of bone (8).
The diagnosis is often unexpected on routine ultrasound. On ultrasonographic routine examination, the presence of intrauterine bright echogenic areas with posterior acoustic shadowing should alert the physician (5). However, differential diagnosis includes intrauterine devices, foreign bodies, Asherman’s syndrome, calcified submucosal fibroids, mixed mesodermal tumours and adenosarcoma (2,8). The report of the ultrasound scan of one of the patients did mention the sole presence of calcified intramural fibroids. Supposedly the ultra- sonographer did not pay attention to the presence of intrauterine calcifications allusive of bone retention due to the presence of numerous intramural calcified fibroids.

For definitive treatment, hysteroscopy is the gold standard. It may be helped by a preoperative gonadotropin-releasing hormone analogue therapy, which permits to see all the abnormal tissue hence facilitate the removal (1,2). The use of ultrasound is advocated in case of numerous fragments to ensure safety and complete removal of the bone fragments (8,9).

The presence of bone marrow in the fragments is believed to be an argument against foetal origin since bone is not populated with hematopoietic cells until the third trimester of pregnancy. Although a heterotopic bone might be colonized by circulating hematopoietic stem cells leading to mature marrow. This could be definitely resolved by DNA analysis of the fragments (6).
In the literature, many case reports suggested the recovery of fertility after successful treatment of intrauterine bone retention (9,11).

The prevalence of intrauterine bone fragments during hysteroscopy at CHRACERH was 0.7% over a five-years period. Infertility and a past history of mid trimester abortion were recorded in all cases. Routine scanning allowed the diagnosis of intrauterine calcifications in 83.3%. Hysteroscopy permitted a successful and safe retrieval of all bone fragments.
Acknowledgements: The authors wish to acknowledge the help of Bruno J van Herendael for his positive criticism and help by the translation.

Interest disclosure
The authors declare that there is no conflict of interest regarding the publication of this paper.

Author’s contribution
Nyada Serge: design, data acquisition, analysis, manuscript write up and edition. All the authors have read and agreed to the final manuscript.